Frustrations of a Glasgow Blue

I was born in 1980, so my first real Everton memory was of the 1987 championship success.

Nevertheless, two FA Cup defeats by that shower from across the park quickly put paid to any sense of entitlement to silverware. Still, I was used to Everton contending for trophies year in year out.

Then the nineties happened.

The early and late nineties were shocking.

Mike Walker, and Howard in his third spell, were disastrous.

Remember the likes of Vinny Samways, Earl Barrett, Brett Angel, Carl Tiler? Truly awful players. But, they still, for the most part, put a shift in.

There was a feeling of, ‘we know we can’t compete with the top teams skill wise so we better give our all and run our arses off’. We almost went down twice but the fans were always behind the team and there was a siege mentality.

The FA Cup win 95′ seemed like it might produce a return to winning times, especially with the signing of Kanchelskis, but it was a false dawn.

Moyes restored a sense of pride to the club. We now combined attrition with some flair. Players like Cahill, Carsley, and Weir wore their heart on their sleeves and we definitely punched above our weight. Ultimately, Moyes was never going to turn down United and I don’t blame him for going.
There was a sense that without some serious cash injection Everton would never be anything other than the best of the rest. Since then, though, we are a totally rudderless ship.
After Moshiri arrived I had so much expectation that we could finally compete in the transfer market. However, it’s been squandered.

I compare it to a kid competing in F1 in a Datsun from the 1960s, before money we were old and shabby, not pretty to look at and massively outspent. But we could compete by making the most of the Datsun, learning the track, and exploiting the weaknesses of other drivers.
Since the money has come in the kid has upgraded to a brand new, cutting-edge Mercedes. It’s shiny and people know the name, but the kid has no idea how to drive it and is wasting money on any kind of upgrade he can get his hands on. Suddenly drivers are passing him in cars that cost less money because they are are driving them with skill, experience, and composure.
That was a weird analogy, right?
Anyway, we’ve had no money for so long that now that we have it, we’re trying to throw cash at our problems without any long-term plan. £24 million on Klaassen and he can’t get on the bench, £25 million on Tosun and he is behind Niasse, £45 million on Gylfi and he’s on the wing. 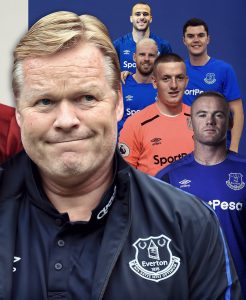 There’s a complete lack of vision and leadership throughout the club. Of the current squad, I’d keep Pickford, Gueye, and…….. that’s about it.
The entire club needs a makeover. Get shot of Kenwright, Elstone, Walsh, Allardyce and all their cronies.
This season has been absolutely abysmal. I’ve watched every game and never felt so detached.
I have no sense of connection with any of the players and Sam makes no effort to connect with the fans. Even the games that we’ve won we’ve been rubbish in.
We’re absolutely the most boring team in the league. All this talk of the new stadium makes me cringe at the thought of who might be playing in it and which league we might be in.
Sorry that this is such a bummer, but it’s been cathartic, thanks for reading.
Andrew Lightfoot
P.S.
I’d still rather be a blue than a red!