A 76th minute penalty converted by Wayne Rooney earned Everton an unlikely point from a derby that the home side totally dominated, but failed woefully to make the most of their possession and territorial advantages.

For the first of two ‘derby’ matches at Anfield in less than a month, RS manager Jurgen Klopp surprised many with six changes from the side that walloped Spartak Moscow in midweek in opting for: Mignolet, Gomez, Lovren, Klavan, Robertson, Oxlade-Chamberlain, Henderson (c), Milner, Mane, Solanke and Salah.

For his ‘derby’ encounter, new Everton manager Sam Allardyce could have been forgiven for picking a side heavily leaning towards a defensive game plan, but he resisted that temptation of picking a starting eleven of: Pickford, Martina, Williams, Holgate, Kenny, Gana Gueye, Davies, Rooney, Calvert-Lewin, Sigurdsson and Niasse.

The referee entrusted to adjudicate on the biggest ‘derby’ fixture in English football – irrespective of how much Sky hype up the Manchester equivalent – was Craig Pawson.

As snow fell from the December sky, it was the RS who quickly settled into their game and a mistake by Martina put Williams under pressure that led to Salah finding Henderson who blazed high over the bar. A fortunate pass from Robertson found Mane in space but, he slipped in the act of shooting and the chance was lost.

Salah threw a long cross to the back post for Milner as the RS constantly won the ball and stayed on the front foot. Milner found Mane on the left but his low shot from a narrow angle was easily gathered.

Gomez was late on Martin on 23 minutes, but the referee deemed the challenge unworthy of a yellow card. Liverpool were totally dominant and Sigurdsson was the first to see yellow for a foul on Henderson. Gana Gueye was rather harshly booked for a challenge on Mane and from the free kick, the scoring was opened. The ball reached Salah on the right side of the box and he outmuscled Martina before walking past Gueye to curl a fine shot beyond Pickford on 42 minutes.

In all honestly, the goal had been long in coming despite it being only the second effort on target of the first half. And it would mean a change in formation for the Blues in the second period.

Morgan Schneiderlin and Aaron Lennon came on for Davies and Niasse respectively at the break to give the Blues a bit more strength in midfield and width going forward, but the early stages saw Liverpool continue to dominate.

Milner from the right wing found Salah with a fine cross, but the Egyptians header back across the face of goal went wide. In a rare forward foray, Rooney found DCL with a great ball, but the curling shot was a tad hurried and posed Mignolet no problem.

Mane tried a speculative bicycle kick that Pickford gathered easily before a foul by Lennon on Mane gave away a free kick that Salah floated in for Gomez to head over.

Firminho replaced Salah on 67 minutes and Everton won their first corner shortly after some good work down the right by Kenny.

A long ball from Rooney reached DCL in the box, but he was bundled over by a clear push in the back from Lovren although they will inevitably claim it to be ‘controversial’ and for the first time in well over sixty years, Everton were awarded a penalty at Anfield.

Lovren, Henderson and Milner all whined at length about the decision, hoping to put Wayne Rooney off, but he stayed cool, calm and collected before despatching the spot kick straight down the middle for 1-1.

Coutinho immediately replaced Oxlade-Chamberlain and a few minutes later Ings came on for Solanke while Rooney gave the captains armband to Phil Jagielka as Sam Allardyce looked to shore up the defence and hold on for the point.

Schneiderlin picked up his second yellow card of the season for a foul on Milner to give the home side a free kick 25 yards out and dead centre. Coutinho lifted the kick over the wall and it seemed destined for the top corner, but Jordan Pickford claimed it to the relief of the Blues fans packed into the Anfield Road end.

With four extra minutes added, it was left for Henderson to raise the biggest laugh of the afternoon as the RS worked the ball to their captain for the 20yard effort to go so high over the bar, it nearly hit the roof of the Kop with Klopp gurning in anguish.

This was always likely to be a backs-to-the-wall game for the Blues as despite the last three results, facing a Liverpool team that has been scoring for fun and with pace a-plenty in their squad was always going to be a tough assignment.

Everton didn’t really impose themselves on the game, at times they were over run in midfield and at times some of the defending could have been considered desperate.

But and its a huge but… for all their dominance of ball possession and territory and for the enormous imbalance in attempts on goal, the actual shots on target ended up at just a 3-2 advantage in ‘their’ favour.

It wasn’t pretty and at times it was downright ugly, but Evertonians and Sam Allardyce will be much the happier than Klopp and the Kloppites who failed to make the most and will Roo the Lovren push that saw the Blues take a valuable point. 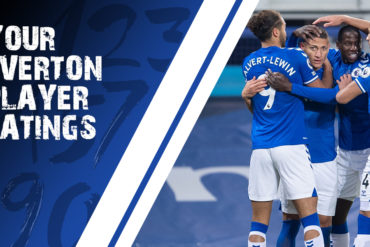