The 2016/17 season ended in somewhat anticlimactic fashion for Everton – A promising campaign tailed off once seventh place was all but guaranteed. It was a positive first season under Ronald Koeman, albeit not as explosive as his predecessor’s debut campaign, but signs were certainly encouraging going into 2017/18.

The summer transfer window was undoubtedly a lot more exciting, as Everton spent an unprecedented £150 million on nearly enough players for an entirely new starting XI. Despite these positive foundations, Ronald Koeman’s side currently find themselves going backwards in the early stages of the new campaign.

As most pundits have been quick to point out, Everton have a glaring hole up front having failed to replace Romelu Lukaku, and yes, that fact is almost criminal. However, barring the Belgian striker’s departure, only Gareth Barry has been moved on from the first team squad that finished the last game of the season away at the Emirates.

That’s two major departures with eight significant incomings. Eight first-team players should certainly be enough to help replace those goals and improve the team overall, but that has unfortunately not proven to be the case. 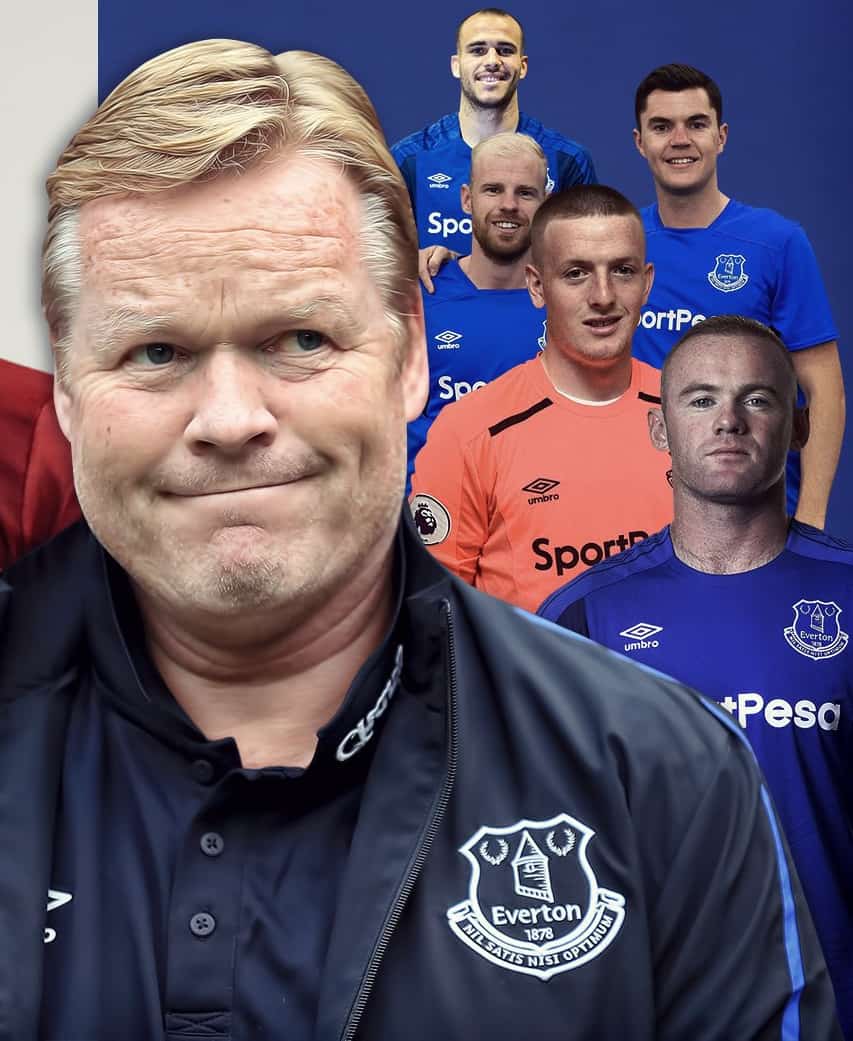 Everton had started the campaign well enough with a 1-0 win at home against Stoke City, followed by a plucky performance at the Etihad to earn a point against easily one of the strongest sides in the league.

The Blues squeezed past Hadjuk Split thanks to a spectacular but albeit freakish debut goal from Gylfi Sigurdsson in Croatia. However, that game and more importantly that performance have proved to be the start of the current decline Koeman’s team now find themselves in.

An away defeat at Stamford Bridge could have been classed as a reality check, as the Blues were second best for the entire contest. A positive performance from Calvert-Lewin off the bench inspired some hope going forward, however the youngster could not get a starting birth against Spurs after the first International Break.

If the Chelsea performance was a reality check, then the visit of Tottenham Hotspurs was a brutal wake up call. The difference in the two sides could not have been clearer as the 3-0 score line could easily have been twice as bad as it was.

From Bad to Worse

Everton had not scored since that evening in Split as they looked to make amends against fresh opposition in Italy. Atalanta came into the game on the back of two defeats and a win in Serie A where they finished 4th last season. Having scored in every European tie in qualifying, hopes were high for the Blues’ trip to the Mapei stadium.

The result was dire. The performance, even more so. It wasn’t even a contest. Once again, the gulf in quality between the two teams was vast. There appeared to be no shape, no plan and no fight nor spirit. Fans’ worry went from a moderate state of concern to one of intense anxiety.

It had to be put right, and things didn’t get much better with an away trip to Old Trafford. Despite the 4-0 score line, the performance was somewhat improved in the first hour, but crucially they still could not find a goal.

The string of poor results and worrying performances quickly thrust Ronald Koeman under the spotlight. He needed a reprieve and 4 home games in quick succession before the next international break could potentially provide that.

They started with a gentle League Cup tie against a submissive Sunderland side containing a series of Everton crocks and has-beens. It was an easy win and crucially it brought about the first goals scored since the Split game at end of August.

Then came the visit of an under-pressure Eddie Howe and his struggling Bournemouth side. The Cherries had only beaten Brighton in the league prior to coming to Goodison Park, and Josh King’s second half goal gave them the lead against a stuttering Everton.

The same problems were evident; no pace, no width, no shape, no guile – Everton simply weren’t set up to cause any more of a threat than they had in their previous encounters.

Koeman would eventually be bailed out by the very man he had tried to phase out of the club – Oumar Niasse was brought on in place of the injured Wayne Rooney after grabbing his debut goal in midweek. And it was this forced change that brought about Ronald Koeman’s first league win since the opening day of the season – a much needed reprieve for the Dutchman under increasingly mounting pressure.

Koeman looked to take the momentum from successive wins into the easiest Europa League group game on paper; Apollon Limmasol of Cyprus at home. The shape, despite its glaring faults, remained the same. Rooney and Sigurdsson played off Sandro, leaving the central areas congested and the wider areas exposed.

In terms of quality, Apollon’s side don’t come close to possessing the talent that the current Everton squad have proven of themselves in the past. However, most of these individuals who shone at their previous clubs look out of sorts in a flawed system at Goodison Park.

The Cypriots were hungrier and more organised, and that ultimately led them to take a crucial point off another one of the big clubs in Group E, having similarly snatched a late draw against Lyon at home in their first game.

The final of the four successive home fixtures came three days later with the visit of Burnley. Sean Dyche’s side came into the game with considerably more confidence than his Dutch counterpart’s starting XI. Having taken 3 points away at the Champions and a point away at Anfield and Wembley, it was little surprise to see the Clarets open the scoring midway through the first half. It was even less of a shock to see them successfully defend that lead for the full 90 minutes, as the Lancastrian side left Goodison park with all 3 points.

The problems that Everton have are exposed every time they come up against an organised side. It doesn’t really matter how good the individuals in the opposition are, if they are well drilled and they have a game plan then they are one step ahead of Ronald Koeman’s current outfit.

It’s true, Everton are desperately missing pace and width down the right-hand side with Coleman and Bolasie out injured, both of whom are eagerly expected to return within the next month. They are also severely lacking the pace and power previously provided by Ross Barkley and Romelu Lukaku, the former of which doesn’t look like appearing in an Everton shirt as long as Koeman is manager.

However, the majority of the squad remains, and in there lies talent. New recruits Sandro Ramirez and Davy Klaassen were pivotal at Malaga and Ajax, and at 22 and 24 years of age respectively, they need time to settle into the “hustle and bustle” of the English Premier League.

Sigurdsson is still showing his class within a small side with his stellar performances for Iceland, taking them to their first ever World Cup Finals almost single headedly. However, he looks far from replicating these heroics in an Everton shirt.

Michael Keane and Jordan Pickford looked imperious in their first couple of league games, however they have both rapidly lost confidence since. Likewise, Wayne Rooney went from appearing to be well up for the fight at the start to now looking somewhat disinterested perhaps due to well reported off the field problems. Additionally, Ashley Williams is a player who looks so out of sorts to the point where it has become frankly embarrassing.

The only man who can help these players improve arguably looks the least likely to do so. Ronald Koeman identified these signings along with Steve Walsh, yet it looks like he has no idea what role or system is best to play them all in.

Utilising the talismanic Sigurdsson out on the left instead of centrally behind the front man is painful to witness, whilst giving Rooney a free role off the right is just as baffling. He has shown little willingness to change it up and bring in wingers, despite the promise of Nikola Vlasic and the pace and skill of forgotten duo Ademola Lookman and Kevin Mirallas.

Ronald Koeman’s persistence and stubbornness should not be met with any reaction other than disappointment, as he is preventing our club from progressing at the rate he initially promised. He has already back tracked on his Top 4 ambitions, and if this run continues, he can kiss goodbye to any European hopes all together.

Koeman commented on Premier League Club’s lack of patience after the sacking of compatriot Frank de Boer at Crystal Palace, stating that if the Everton board were similarly ruthless, only then would he be worried for his job. However, Koeman hasn’t been in his job for just 5 games. He’s had nearly 18 months to establish his game plan at Everton and his players clearly aren’t buying into it.

Patience as the say is a virtue, and it is a crucial asset to have when trying to build and establish a successful football team. Evertonians would have a lot more patience if they saw some potential for adaptation or change, however this season has shown Koeman is simply not like that. We have never been the type of club to sack a manager on a whim, but if performances continue to regress, then the change needs to be made sooner rather than later. That is what top clubs do, and that is where Everton should expect to be.

Underneath the disarray lies a good group of players, albeit lacking in certain areas, but they are more than capable of producing efficient displays until more reinforcements can be attained in the New Year. The trip to Brighton on Sunday will be tough, with a huge game at Goodison versus Lyon to follow midweek. Any negative result or display may well signal the start of the end for the “Oranje” legend’s relatively brief tenure at Goodison. One thing’s for certain – It is about time that Koeman translated his past playing successes onto his players, as they are clearly in desperate need of his assistance.