It took 22 minutes for a truly heroic redemption story to be written into the Goodison history books. A drilled pass from the Ketwig Kaiser which may have been our first forward pass of the match against Bournemouth, was taken in stride. It was then leathered into the net with almost a primal scream of joy coming from the returned, rehabilitated, wronged and now beloved Oumar Niasse. And it couldn’t have happened to a nicer, more dignified and deserving man.

Bobby Martinez’ final transfer was unloved and unlovely when he arrived. We’d all seen the Youtube vids of him lashing home screamers in the Russian top flight on his way to their Player of the Year award. We were excited about the idea of Niasse offering the lethal but complacent Lukaku some competition for a striking slot. But like every Tinder date – what was seen on the internet was not what turned up in the flesh. More baby giraffe on ice skates than languid hitman, Niasse’s bizarrely poor debut performance saw him as the convenient scapegoat for a Goodison crowd who were now poisonously disillusioned with Martinez and his stupid shoes.

What came after made me ashamed to be an Evertonian. A dignified man was publicly humiliated by the new manager, exiled first to Hull which wasn’t punishment enough apparently amidst stories of having a locker taken from him. He was made to play with the U23s and scored more than a few goals on the way to Unsy’s men winning the PL2 title. But still, it wasn’t enough. ‘He couldn’t be THAT bad’ we started to mutter. ‘He scored against The Shite. He got plenty in the U23s.’ But still, none of us were convinced.

We sold our grumpy goal machine to Manchester United and seemingly replaced him with every bad Tom Cleverly tribute act Steve Walsh could find. While we awaited the inevitable replacement, many if us were happy that it looked like Niasse had found a route out of his blue hell. Crystal Palace would buy him, we’d get some money back and he’d escape – everyone a winner. Until it fell through AFTER the last minute. So on his purgatory would go. And his poor treatment. Even with the onslaught of Europa League fixtures, Oumar was still omitted from the European squad.

You suspect players are treated shabbily by clubs everywhere but rarely is the humiliation so public and apparently so unapologetic. Koeman charmlessly almost bragging about how he told Oumar that if he wanted to play football, he’d have to leave Everton. Another season of exile beckoned.

Niasse was, like Gendry in Game of Thrones, off rowing somewhere. Abandoned by the main narrative. Remembered only with a wry smile or as a cautionary tale about buying off Youtube. But the football gods were to exact a revenge of sorts. Koeman was quickly exposed as bluffing chancer as defeat after defeat saw increasingly impotent Everton line-ups struggle to muster a shot on target let alone a goal. And when Ronald went to the cupboard to find himself a striker, he only had the past-it Rooney, the unfinished Dominic Calvert-Lewin, who though excellent, has yet to establish the skill set of an out and out goalscorer. And Oumar.

In desperation and partly, one suspects to silence a demanding Goodison crowd, he recalled Oumar to the lineup against Sunderland in the Caramac Cup. We didn’t have high hopes so what happened next was stunning. He scored. Not just a goal but a brilliant instinctive one. Fate was demanding he be given a chance in the Premier League.

Everton were terrible against Bournemouth. As they have been for 98% of this season. Baines a parody of a left back – neither defensively sound nor attacking threat. Williams making Funes Mori look like Maldini. And Koeman’s additions of Sandro, Klassen and Sigurdsson are making the Barkley boo-boys look like the imbeciles they are. Niasse rescued Koeman – the man who’d done so much to embarrass him. Though clearly Niasse is much too nice a man to have taken satisfaction from the irony, I’m happy to do so on his behalf. 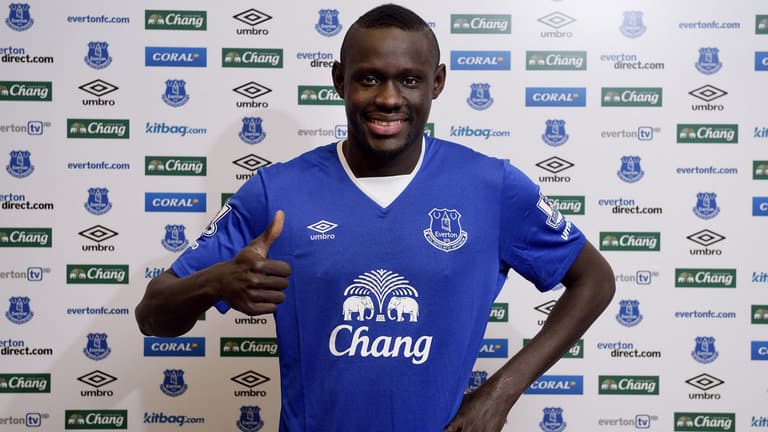 He’s not the long term answer – as we saw against Burnley. Even though he was easily our most dangerous player. So much improved from the first, bafflingly bad performance we saw under Martinez. He can’t trap a ball well, he loses it often and he’s caught offside a lot. But that described Mirallas and sadly more than half the team at the moment. What he offers is something unique for us.

He’s a natural striker. He makes runs like one. He gives midfielders a forward option by running the line. Sandro, his main competition, on the other hand seems allergic to the six yard box and is even less gifted on the ball. Rooney hasn’t led a line since 2008. DCL is a target man and has been woefully misused.

Niasse is a playground striker and that’s what we need right now because we have no striker at all. He chases lost causes and follows up shots. He worries defenders. He gives them something to think about. And he tries. When the rest of our team look like they’d rather be in Hull, Oumar looks like there’s nowhere he’d rather be than on the Goodison turf.

I don’t care what Niasse does outside the penalty area – he can score goals in it. I hope he gets more chances. Right now, there’s no question who I’d prefer to see stay at Goodison between Niasse and Koeman. He’s earned his chances. And if he never plays or scores again, let’s salute and appreciate a better man and player than most of us will ever be. Oumar Niasse. Thank you sir.