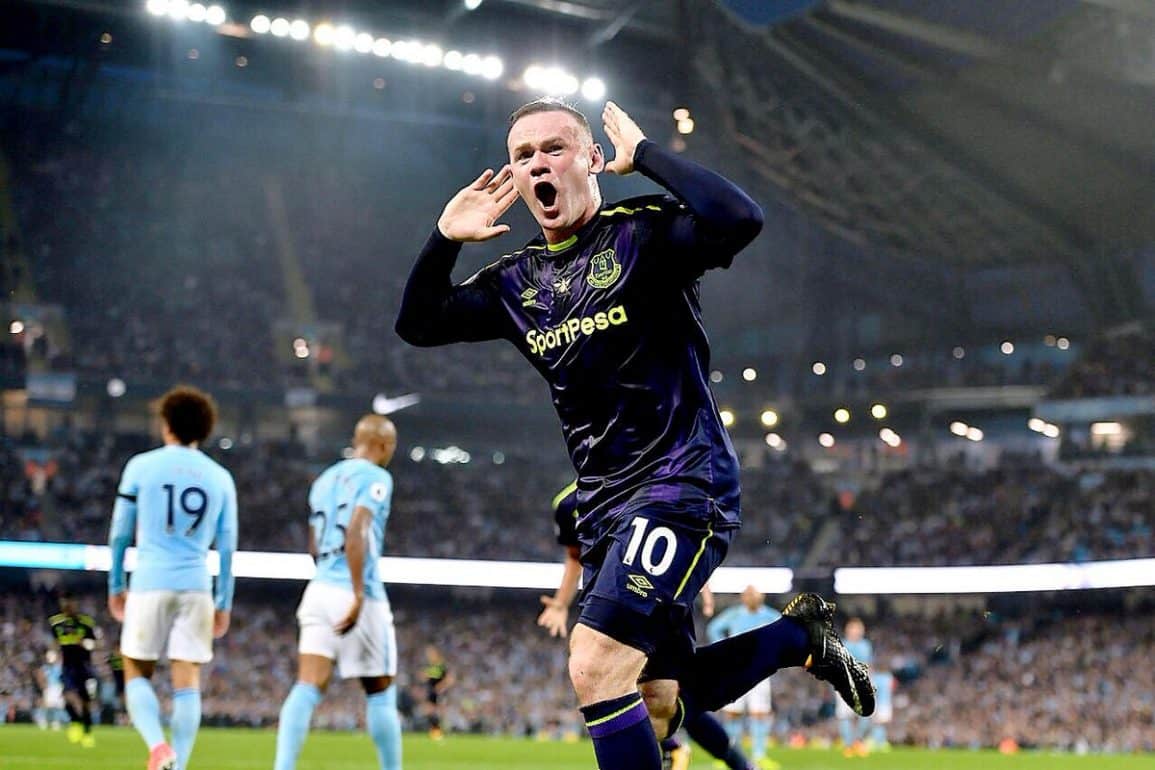 Rooney on the mark as Walker and Schneiderlin see red.​

An enthralling and keenly contested Monday night game saw Everton take a point from the Etihad courtesy of a Wayne Rooney marker, but the game will be remembered for red cards for City’s Kyle Walker and Everton’s Morgan Schneiderlin.

In the middle and to play a pivotal part was referee Robert Madley.

City immediately took to the front foot with Otamendi sending a 25-yard shot in that Jordan Pickford dealt with easily with Everton, in their new third kit, responding with DCL taking a long ball down the right from Holgate to fire a shot across the face of the City goal.

Schneiderlin was annoying booked inside seven minutes for a rash challenge on Aguero meaning he’d need to be careful for the vast majority of the game.

After Pickford made another easy save from a weak De Bruyne effort, a long ball found DCL who did well to hold the ball to find Davies arriving on the edge of the box, but his shot was screwed wide of the target.

Tom Davies was booked in the 24th minute for diving as he fell trying to get past Otamendi, leaving Everton with two midfielders walking the officiating tightrope.

Pickford parried a second long range shot form Otamendi with Phil Jagielka perfectly on hand to clear the chipped rebound effort from Aguero over bar for a corner that came to nothing for the home side.

City’s best chance came when De Bruyne released Aguero into the right channel, but even though he slipped, Phil Jagielka did enough to foil the Argentinian, and from the clearance, Everton broke quickly to delightfully open the scoring on 35 minutes.

Holgate and DCL combined excellently on the right and a terrific cross from DCL found the man of the moment Wayne Rooney and the ace goalscorer lost his marker Stones to one-time his shot through the legs of Ederson for 0-1 and the 200th Premier League goal of his illustrious career.

Baines was scythed down by Walker and the former Spurs fullback was rightly yellow-carded, and moments later Baines brilliantly denied Walker with a crucial sliding tackle following a poor clearance from Pickford.

A poor pass by Rooney gave City another chance to break forward from midfield but the weak shot from Jesus under pressure from Jagielka was never going to trouble Pickford.

Kyle Walker then backed into DCL who went down and the referee felt there’d been sufficient contact to warrant a second yellow and the mandatory red card to send City down to ten men. In all honesty, whilst it was a foul, it probably wasn’t really worthy of a second yellow, but that’s the referees call, not Everton’s.

City withdrew Jesus during the break, replacing him with Raheem Sterling.

Holgate was having a good game and foiled the dangerous Sane with a tackle at the expense of a fifth corner for the home side that came to nothing, like the previous four.

Gana Gueye conceded a free kick in a dangerous position with a foul on Sterling, but the Everton wall stood firm to block the short from De Bruyne and Jagielka cleared the second effort from Silva

Ronald Koeman gave record signing Gylfi Sigurdsson his Everton debut in the 61st minute, replacing Tom Davies, and followed it up moments later with Davy Klaassen replacing Ashley Williams as the manager opted for a conventional back four in front of Jordan Pickford for the last half hour.

A fine ball from Rooney released DCL down the right but his cross for Rooney arriving in the box was just too close to Ederson.

Danilo replaced Stones in the 65th minute as City, still enjoying plenty of possession, looked to try and get back on level terms, and Guardiola made his final change with Bernardo Silva replacing Sane four minutes later.

Aguero twisted and turned to set up the new arrival, but his shot was mistimed and comfortably wide of the target… City’s next attack saw Sterling fire over from distance with Pickford again untroubled.

Rooney went for a spectacular second after Ederson raced from his goal area to clear from the advancing DCL, but the 40-yard effort was well off target.

De Bruyne fed a nice ball to Aguero and his telling ball into the path of Sterling was blasted high over the Everton bar.

Otamendi made a meal of claiming an elbow in the face from DCL, a blatant attempt to get the Everton striker sent off as the home side patently felt that DCL had gotten Walker sent off. Aguero than dived trying to win a penalty, but escaped punishment after claiming a foul by Baines.

Disappointingly, Mason Holgate’s fine game was spoiled on 82 minutes as a poor header to a cross from Danilo fell sweetly for Sterling and he buried the equaliser on the volley. Rooney picked up a yellow for dissent in the aftermath of the goal that set up a nail-biting finale to the game

The games second controversial red card came in the 88th minute as Schneiderlin appeared to win the ball, but Aguero went down and the referee evened up the numbers.

It was exciting stuff as Besic and DCL broke away and Sterling responded with a speedy race against Keane a dangerous cross. City to be fair, had never panicked and a cross to the back post was importantly cleared by Klaassen for another City corner.

Summing up, Ronald Koeman said, “I’m disappointed. Maybe you would take the point before the game but one nil up at half time and eleven against ten… but even with one less player, City have great talent. The tactical plan was outstanding in the first half and maybe we could have done a little bit more, but I think we work really hard for a good result and one point away against City is a good result.”

Asked if the summer spending was over he replied, “I hope not. We need a left footed defender as cover for Leighton with Funes Mori injured and even with the talent we’ve got, we need another striker.”