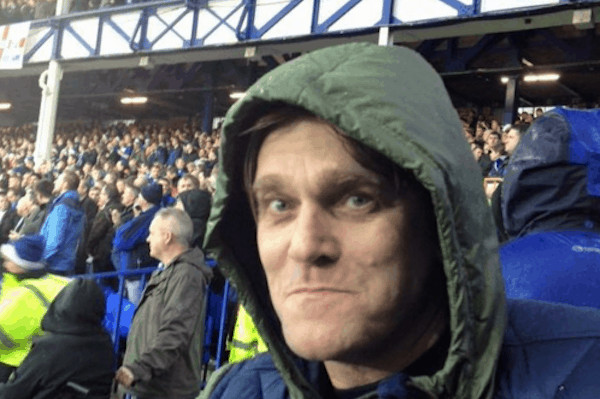 The other day I had a random message from Mr GrandOldTeam himself asking if I fancied doing an interview. I thought this was it, I’m finally being interviewed to be a moderator on the site forum, alas it was not this. It was something even better.

But it is what it is. It’s my soap opera if you will. So when Mr GOT asked me to interview WWE trainer and massive massive Evertonian Robby Brookside for the site I couldn’t help but be excited.

I don’t expect loads of people who read GrandOldTeam to know who Robby Brookside is. There’s a small wrestling clique on the site forum who are fully aware of the man, but for those who aren’t, Robby is a retired professional wrestler, you might not have seen him, but he had a couple of appearances on Monday Night Raw and wrestled all over the UK, Europe and USA. These days Brookside is signed to WWE’s development territory, know as NXT. Essentially it is his job to train the next Stone Cold Steve Austins, Rock and Triple H’s. Nice work if you can get it!

But perhaps most importantly for here, Robby is a massive Evertonian. Born in Kirkdale and absolutely knows his stuff about the Blues.

This interview talks a little about Robby coming over to the UK for the NXT Tour and about his love for Everton.

A few pleasantries are exchanged at the start as Robby has been up since 6am, getting ready to do a host of these interviews, run a training class and then attend a live NXT show later in the day in Tampa.

I asked Robby how it feels to be coming back over to the UK and especially Liverpool with WWE on the NXT Tour which starts next week;

“It’s hard to put into words, especially the Liverpool part. We came over just before Christmas for first ever (NXT) tour and we went to places like Glasgow, Newcastle, Blackpool which was possibly one of the best shows I’ve ever been involved with. The crowd were just, I’ve never witnessed that. For our talent to go over to England and to get responses like that is possibly better than me getting my boots on back in the day.”

“To go back to Liverpool, this is a strange story, my mother was 85 yesterday and before I came here I lived in Leicester, and she always used to ask when am I coming up. Well she still says it now as she doesn’t really realise I’ve lived in America for nearly 3 years. So she’s never been to an American wrestling show and next week will hopefully be the first time she’s going to ever see the size and the quality and standard and spectacle that NXT brings. I’m really excited and nervous for my mum to behold this. Just to go back to Liverpool and the Echo Arena is such an iconic arena on the water front and for our talent, some of them it will be their first time in England. I never thought I’d take it to England when I first came here in September 2013. I was only supposed to come for 6 months! It’s been incredible to be part of it. And bringing it to Liverpool, I can’t tell you how proud I’ll be. The bookings are good and we are bringing some incredible superstars over. It’s going to be a hell of a night”.

I then remembered that I was doing this for a football site so thought it best to sort of bring it back to who I was representing. I asked about how I’d seen a bit of an Everton following amongst the WWE wrestlers, with Daniel Bryan, Fandango

, Bill DeMott, all claiming to be Everton fans. I’d seen loads of Everton shirts on the WWE show Breaking Ground which were Robby’s, so wondered if he’d got any of his NXT rookies in to the blues;

“It’s an ongoing campaign! There are a kind glory hunters. Tucker Knight is a Chelsea fan, Apollo Creed is a Man United fan, but in the last couple of days I’m trying to convince our head coach Matt Bloom (former WWE Superstar Albert/A-Train)

into being a blue. He comes from Boston so I’m trying to get him away from the affiliation of Fenway Park and all that. If Everton can get me a 4XL shirt for him he’s given me his word that he will become a blue! Hopefully we are going to get some of the team a tour around Goodison and show them the ancestral home.”

“I was born and brought up in Kirkdale just the bottom or Orwell Road. That’s where I used to walk up to the match. On a Sunday as a kid I used to go for a kick around by the enclosure and re-enact the Saturday. Bob Latchford was always my hero so we’d go in. Me and my mate Tommy Lewis used to be Bob Latchford and I used to be Dave Thomas. It’s a state of mind being an Evertonian”.

I asked if had a pick of which new manager he would like;

“I don’t really have an opinion, I’ve heard names like De Boer, Koeman and Emery, and he did a great job in the Spanish league. It’s going to be a big decision. He needs to lift the club up. I went to the Stoke and Leicester games over Christmas and I remember the dark days of Billy Bingham and Mike Walker and even Walter Smith where it wasn’t good, until there was one magical moment where Adrian Heath lobbed a header over Peter Shilton and I never felt anything like that. All of a sudden we knew we were going to win the cup and it started a wonderful run of 3 years where we were invincible. I was in the enclosure for the Bayern match and never saw anything like it. In the second half the belief of everyone was more important than the final. We knew we’d beat Rapid Vienna. I feel for the younger generation of Everotn fans who didn’t even see us win the cup in 1995.”

is a Spurs fan and on the last tour he went around there, and Finn’s a good lad, very kind. Some of the banter over here, the other week when we got knocked out of the cup by United, Hugo Knox (NXT wrestler and former Port Vale and Burton Albion goalkeeper),

smashing lad but a Liverpool fan. He can’t spell Liverpool and he’s never been, I think he must have done a tour or something of the stadium, he was giving me loads the other week. But after the Europa League final he avoided me at all costs.”

I asked if Robby had managed to see the Tony Bellew fight at Goodison, in the hope he might be able to put in a good word to Vince McMahon about getting Summerslam at Goodison;

“I didn’t no. I was away in St Petersburg. There was a guy on Twitter who was tweeting about it. It sounded immense. For Tony to come through and win a world title at Goodison. I don’t know Tony but we actually used to train in the same place, the Rotunda. A guy called Ricky Keaton used to train us and I do an exercise here called the ‘Brookside Shuffle’ which he taught us. I didn’t know Tony was part of the Rotunda too. I can’t begin to understand how it is for Tony to win a World Championship at Goodison with the immense crowd and Everton songs. It’s a dream come true.”

No Summerslam at Goodison then.

I was running out of time, so I quickly asked Robby who his favourite ever Everton players were;

“Oh god. That’s a hard one. In the eras, in the 70’s I would say Bob Latchford, in the 80’s it would be either Neville Southall or Greame Sharp and the 90’s hands down Duncan. The different eras. Bob Latchford gave me hope, in the 80’s, Neville at one end and Sharp at the other were just a pleasure to be there, and Duncan shone when we were atrocious.”

And that was that. To be honest I could have spoken to him all day about wrestling and Everton. What a top guy. Even if you’re not into wrestling, and that’s most of you, Robby Brookside is a name worth noting as you won’t find a more passionate blue.

You can catch Robby and his NXT Superstars at the Echo Arena Wednesday 15th June. If it’s not sold out! Which it probably is by now!