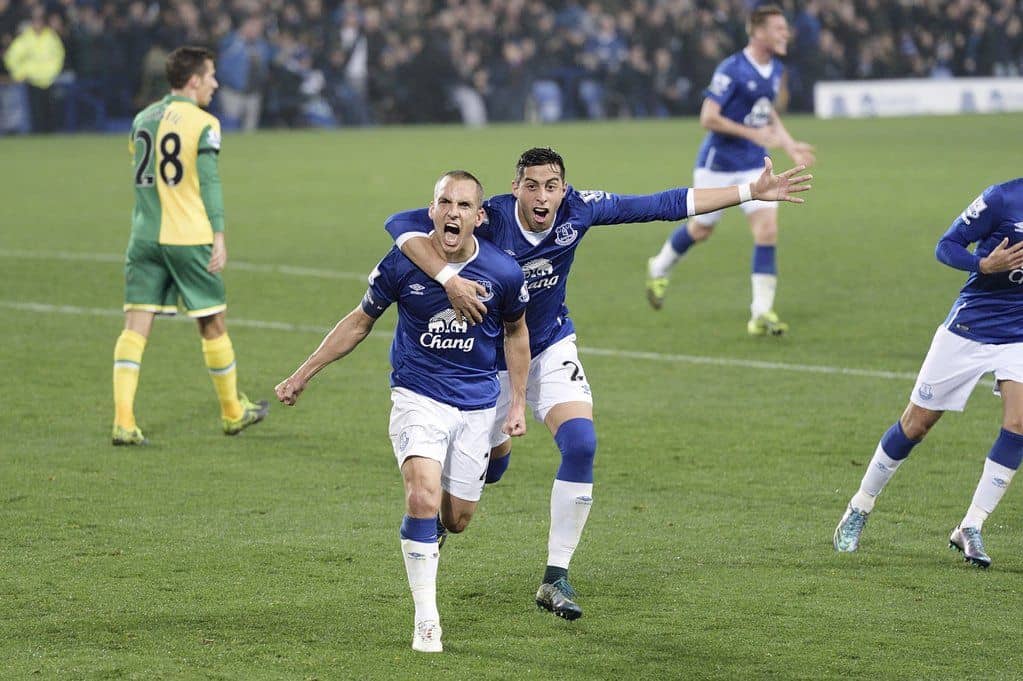 Everton beat Norwich City on penalties to progress in the League Cup.

Match report via McBain: It was already three minutes into the game when I finally found it. Button headed Robbie Slater and Herr Bosnich take the night off as we head into the Capital One Cup fourth round. At home, versus Norwich. On paper this is a no brainer, right? Cups are special things, for special teams, but in a Cup, we’re a usually a very different kind of special. Taking to the Pitch was Bryan Oviedo, Gibber and Leapin’ Leon after long absences. In for Galloway, Barry and Barkley. Funes Mori deputises for the injured Jags, Browning in for Coleman, Delu, Kone and Lukaku providing the attack, while McCarthy retains his spot. For the first ten minutes it’s all Norwich. Corners, running, hassling, Norwich are giving this a red hot go, while we are dire. I’ve sent away to Mensa to see how many times we gave the ball away, and the results will be a while. “We’re playing like a team with 7 changes.” Says the scouse bloke on the commentary to which Snods and I agree. I’m trying not to listen to them because they’re 5 minutes ahead of the vision I’m watching, and it’s making me feel weird. Like V.R. I turn them off. The first half comes, and it goes. A 50 yard shot by Funes Mori and a cracking raking cross field ball by Gibber are the touches of any note in a half so sloppy if it ended up online you’d file it under Gonzo. The slops continue well into the second. It’s Sloppy Seconds. It’s an awkward game, being made tricky by a Norwich side showing Premiership quality pressing, and an Everton side intent in shooting ourselves in both feet. Norwich, feeding off our generosity, fire the first salvo as Bassong gets the ball into our net. How dare he. 0-1 down and in a familiar position to that last cup game. At some point Browning comes off for Barkley, and Kone comes off for Deulofeu. Stones goes to RB while Gibber moves into the backline. We have chances, Mirallas flashes wide, and then my feed goes down until we score. …….buffering…….. Osman! Scores from somewhere, somehow. 1-1 and its slightly back on, but not before Grabban gets goal side and Joel pulls off a great save. Grabban should have had a couple all told. We finish the stronger, the last ten minutes of the match it’s best so far. Delu, Mirallas, Lukaku and Osman all with chances to put it away. Lukaku sends a football into outer space and we’ll check back in with its on it’s approach to The International Space Station, while everyone else seems to believe hitting the ball directly across the goal with noone on the end of it will result in something happening. But not to be, it’s off to extra time. The game opens up further, and despite the frustration, it’s a really absorbing Cup tie. Naisy comes on for Mirallas, and it’s flashing shots across goal from us, and free headers into the box from them. Grabban, then Jarvis pulls Joel into a great save at the back post, Delu is getting forward and whipping in the deliveries or stepping inside. Barkley seems completely anonymous or is it me, hidden in the pixels as the games lurches from end to end. Everyone’s knackered by the halfway mark of ET and with a last muscling effort Lukaku spins in the box and gets his shot away, deflected, which Rudd gets a hand on. Looks good the Norwich Keeper when called upon today. Penalties, and it’s a perfect end to the sloppiest of games. Joel swats away two (or the last one flew wide i couldn’t tell), and it’s a poignant reminder to Martinez that the understudy is ready. Joel held up his very polite hand today and it will be interesting to see who gets the nod for Sunderland. A selection mistake from Martinez on the weekend, and it could be ugly. JOEL : 8 BROWNING : 5 STONES : 6 FUNES MORI : 7 OVIEDO : 6 GIBSON : 6 OSMAN : 7 MIRALLAS : 6 KONE : 5 LUKAKU : 6 BARKLEY : 4 DELOFEU : 6 NAISMITH : 5 x McB