Weird times these that we’re living in.

When the fixture list came out it was to much gnashing of teeth about our initial three month prospects. A draw at home to Watford only accelerated that anxiety.

Then Everton started playing some footie like they were, well, rather good at football.

A goalless draw away to Swansea and coming from behind to beat lower league Reading in the League Cup obviously sets the pulse racing in a way few others can reach.

Still a long way to go before we can accept that it may be a decent season in store but it’s nearly October and we’re sat in sixth place, albeit three points off sixteenth. Such are the fine margins Everton like to roll with.

Swansea are more than a decent team in the Premier League and there aren’t many teams who will go to their plastic little ground (with plastic little fans) and better them all over the pitch. Obviously these words are folly as thanks to some utter pipe shooting we failed to come away with the three points, so we’re not as good as a skinhead Barkley rattling one in off the bar on a cold evening before Christmas. But we’re doing sound. The second half character against Reading shows this young Everton team do have a few more gears than some of their predecessors.

October is a shitter of a month fixture wise so this prelude away to an inconsistent West Brom smacks of opportunity. We’re going to be splendid in green hopefully once more.

Tony Pulis wears the expression of someone who’s just took a waft off poppers under his nose for the very first time. As if that’s not enough he has the eyebrows of a cruel overlord determined to assassinate Flash Gordon, and yet despite all this he’s one of the more tolerable managers in the current Premier League.

There has been a lot of unfair and unkind PR thrown his way as a one dimensional long ball merchant and while this is completely true he didn’t need to wear a Bluetooth headset and pretend he was a sports science guru like other skip jawed fat beauts whose teams played in exactly same way. Sam Allardyce, if that description didn’t enlighten you.

He turned up at West Brom with them struggling in deep winter and steadied them sufficiently to earn his non relegation bonus and some further time to try and shape a team there. They’ve had an alright start to the season with some notable away wins at Stoke and Aston Villa before dipping 3-0 in the League Cup at Norwich mid week. They’re sat a point behind us so not too shabby.

You know exactly what you’re going to get – a hard working well drilled team who will compete for every ball and look to win by a narrow margin. Everton need to obviously get right after them, they’re suited to tight games of attrition whereas we have the players to sex them where it hurts.

Not a lot bad to say about West Brom fans either. That part of the world produces a lot of genuine nice working class people even if they have some zany #bantz and fashion. The odd Daz luvs Mary tattoo on the forearm aside they are generally good enough hosts. Poor dental hygiene and lamb chop sidebearns are much preferable to some of the other offerings we have to put up with. Questionable inbreeding and scruffy kids playing football with a tennis ball in the streets can be overlooked due to their amicability I feel. BNP voting meffy terraced communities full of denim jacket wearing small town Friday night lotharios aint that bad, so relax. Caravan dwelling dog touching glue addicts or geordies? You’ll do for us West Brom, well in.

They had a similar ordeal to us in the summer where the press were keen to sell one of their key players in Berahino to Spurs. Player put in a written transfer request and West Brom held their ground too. Berahino stamped his feet a lot more than beautiful John Stones but for intents and purposes they were two similar pieces of the same tedious game. This week Pulis has been referring to Berahino as a naughty child who their fans have forgiven but make no mistake he’ll be out of there like a flash as soon as opportunity arises soon, probably same as Stones if we’re being balanced. Anyway, he’s the creative danger up front or out wide, whereas they will be relying on big money signing Rondon to score the goals. They also have Anichebe and Rickie Lambert.

One time apple of Martinez’s eye Callum McManaman could start on the right wing for them and key to Pulis’ strategy is a tough working midfield three containing the occasionally ace Yacob, Fletcher and Gypsy Wedding walk on James Morrison. It’s one of them games where Barry, McCarthy and co are going to have to compete consistently throughout.

Another Pulis trademark is a settled back four and this should be Dawson and Brunt as full backs – and make no mistake I want to see a certain jet heeled blonde haired Spaniard with a face like a 17th century ghost of ours haunting their every move – and a centre back partnership of McAuley and Jonny Evans. Ben Foster is injured so it’s “big” Boaz Myhill keeping goal for them, the ham faced shitehawk.

It’s probably the same team that started against Swansea as that’s how it works – minus the one or two injury doubts we have – but I’d like to think that some maybe played their way into Martinez’s thoughts midweek. Well OK, just Deulofeu then.

Lukaku hasn’t had the best of weeks so he’ll return to his former team with hopefully a bee in his bonnet to put that right as we’re not too pretty for options up front exactly are we? Kone has proven a useful foil but has been slotted over to the right wing now which makes me twitch like Samuel Eto’o pretending to be a left winger. The unspoken rules of football means it would be arl arse to drop Naismith just one game after being called back into the first team for a hat trick against the current champions, so he’ll start. His industry could be useful against that West Brom midfield too.

Ross Barkley though. Pick that one out lad.

Speaking of industry there is no way on God’s green earth that anyone other than Barry and McCarthy will start for this particular fixture. More worrying is that Stones is struggling to shake off whatever twinge he picked up in the week which could pit expensive unknown centre back into a Monday night game away to West Brom. We’ve been here before haven’t we? Seamus Coleman is everything but being labelled “late fitness test” away from starting. Galloway and Jagielka seem the two definite to start and of course Tim Howard after Joel Robles was placed gently into his box full of tissue paper and put back in the loft until next Christmas/League Cup game.

The tight nature of the league means a draw or defeat places us back under stress with our next three league fixtures being the great red pocket pissers, Man Utd and Arsenal. 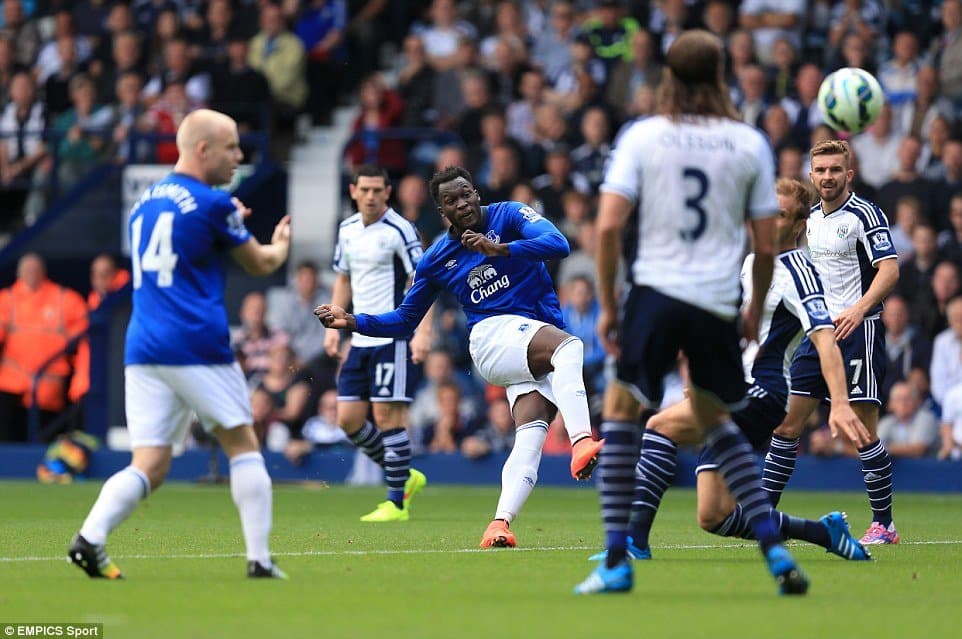 Or we could just piss it all. Either scenario is plausible, even if toil is the more likely bedfellow of St Domingos. Whatever next? They elect a genuine socialist Labour leader who travels around by bike and President Putin wants to meet up with Elton John?