Ahead of Duncan Ferguson’s testimonial today, we’ll be revisiting a few articles from the past…

Duncan Ferguson came back from a three-match suspension to grab a hat-trick and give Everton real hope of avoiding relegation in the spring.

Howard Kendall was missing a dozen players through injury and suspension, including key figures like Gary Speed, Dave Watson and Craig Short, and was forced to press four teenagers into action.

Youngsters like Michael Ball and Richard Dunne fought for their lives as the Goodison Park strugglers won at home for the first time in two months. 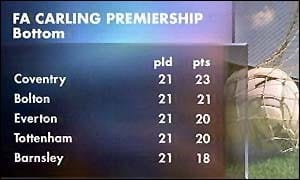 Ferguson, who was 26 on Saturday, was a tower of strength and a superb role model for the young Evertonians.

Bolton played three central backs to combat the aerial menace of Ferguson but the big Scot, wearing the captain’s armband in the absence of Speed, was not to be denied a hat trick of headers.

The first came on 17 minutes from Tony Thomas’ cross.

Four minutes before half time Everton were 2-0 up after Ferguson finished a fine move involving Andy Hinchcliffe and Nicky Barmby.

But a devastating two-goal burst by Bolton in 60 seconds just before the break seemed to sum up Everton’s season.

After 42 minutes Gudni Bergsson headed in a free kick from Scott Sellars who followed that up with a long range shot which flew past Everton’s new keeper Myhre.

Kendall gave his players a half time roasting and in the 66th minute Ferguson battered his way to a hat-trick with another header after 66 minutes from a Thomas cross.

Cautious Bolton decided they had to come forward and Myhre made the save of the match by leaping to his right to tip over a Blake drive which was heading for the top corner.

It was backs to the wall stuff at time for a club which a decade ago was challenging for the championship but they were worth their win and the three points lifted Everton one place up the table.