By GrandOldTeam
Everton NewsLists
7 years ago 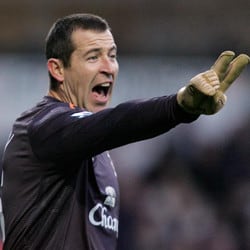 David Moyes swooped to sign England international Nigel Martyn on transfer deadline day in September 2003, to increase competition among the ‘keepers at Goodison.

Nigel Martyn quickly established himself and his great performances between the sticks won him Everton’s Player of the Year Award for the 2003/04 season.

He maintained his position as the side’s number one choice during  the 2004/05 campaign and signed a new one year deal at the end of that season.

He continued to be a virtual ever-present during the first half of the season but a series of ankle problems sidelined him from January onwards, providing Richard Wright with the opportunity to return to the side.

Martyn did not feature again for Everton and announced his retirement from football in June 2006, retiring with 99 appearances for Everton.