Back to the grind, the weekly task of playing some overpaid plebs from a crap nondescript town or city in the borders of this fair land. Thatâ€™s the derby gone for a while and all the pulse racing thoughts with it. It feels nice too. 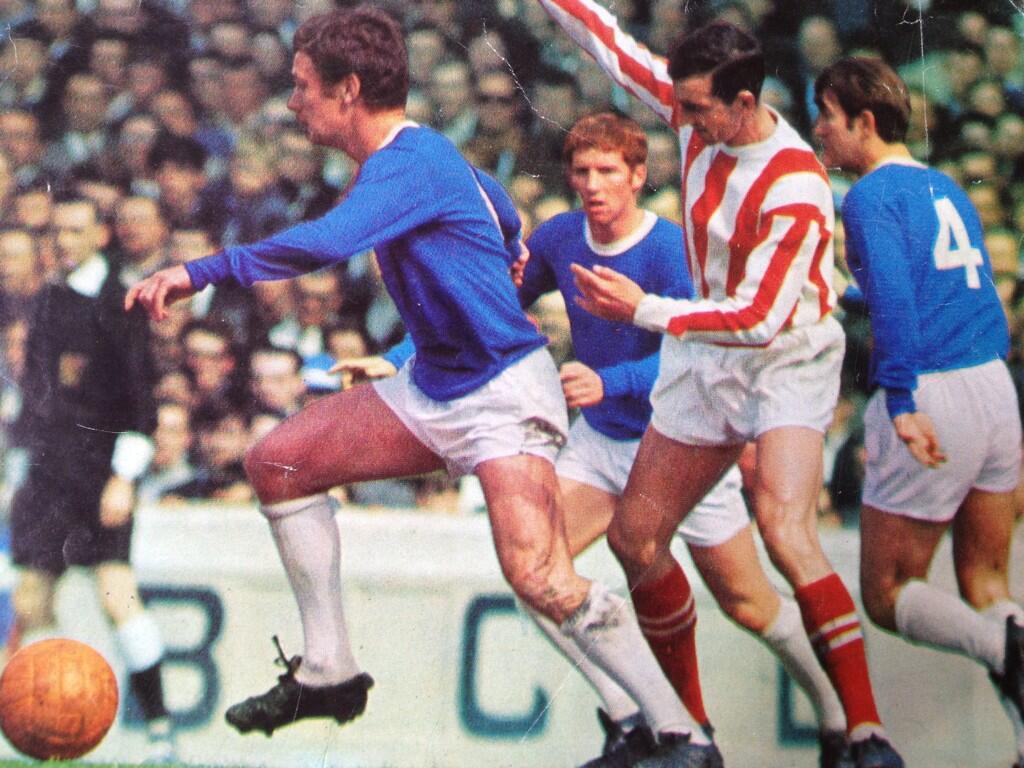 Nice because we were disappointed to throw away two points late on and in non blue tinted specs retrospect we were the better team, played the better togger, created by far the most chances and should have defo won. Nice because we didnÂ´t tiptoe around them like it was 1978. They have all and sundry happy to announce that Liverpool are on the up again, if thatâ€™s the case then hold tight because this Everton team is looking a bit ace too.

And its about to turn to December and were in the mix, three points off second place with only a sole league defeat away to Man City who are likely to shoe anyone who turns up at their big jarg bowl stadium. Under a new manager with a sort of newish way of playing thatâ€™s objective complete. Now for sustaining it over the rest of the season intermittently sprinkled with some hard to severe bummings of half arsed teams on our beautiful green grass of Walton. It wonÂ´t be that smooth of course but we can pretend it will be for now at least. Were in the middle of a difficult patch of games and one where weâ€™ve got into a frustrating habit of draws â€“ thatâ€™s three consecutive ones now so we frustratingly canâ€™t kick on and push that second place. Like when youÂ´re getting a legga in a dream and you canÂ´t run properly for whatever reason. Its only a matter of time before the giant robot werewolf or cock-of-the-year above catches you and punishes you for not making the most of the opportunities provided. Fire away Sigmund.

So thatâ€™s why a visit of Stoke is very much welcome, not in any way to demean Stoke as if youâ€™re sad/desperate enough to read these previews (HI MOM!) then youÂ´ll have grasped I usually say nice things about them. Thatâ€™s going to be a continued theme for this seasons as I like a tough playing, well parochial supported team pissing off the masses by taking points off others and not giving the slightest shit about who cares about them. Well in Stoke. Its obviously one of the more moodier nights out in Britain with spam knuckled locals looking to engage outsiders in banter/violence to try and provide a welcome distraction to the sterile and almost Soviet type upbringing and surroundings. You may have seen them films of Leipzig in 1982 and people going about their lives against a backdrop of grey communist buildings with mullets and crap cars, moustaches and bad meffy shoes. Stoke that.

If you want to see the best of Goodison you have to employ the presence of the a pantomime villain. Be that a hated rival player, or indeed Liverpool FC, or a snidey ref whoâ€™s sent one of our players off. Do that and the beautiful yet creaking old ground gets very angry and usually results in an Everton performance.

Now pipe down you raft chinned arl Welsh prick, youÂ´re not that important to generate that level of hate Mark Hughes. But we know what you done a couple of summers ago. Namely tried to look down your nose at Everton as manager of Man City. Donâ€™t shake your head you tit, we know what you were doing and youâ€™ve got massive shit on as your career have gone to pot. Ex EFC player too. Sporting an appropriate Soviet heartthrob hairstyle straight form Panini 1982 heâ€™s currently trying to revolutionise Stoke. How? By playing some football apparently, if you read the broadsheets anyway. Thing is that Stoke were capable of playing some decent footie and did do at times, usually through dead nippy wingers and a sturdy midfield. They unfortunately made the fatal error of scoring from corners and throw ins which the masses didnâ€™t like. Defending a set piece from them was akin to being in a mosh pit full of Polish bodybuilders at a particularly vibrant Iron Maiden concert. While all on grade A beak. And too many steds. All washed down with Kestrel Super Strength.

But now theyÂ´ll be changing apparently which puts them in a precarious position as they have a collection of not all that players who youÂ´d think are not too adaptable. Think along the lines of Jagielka and Distin trying to be sweepers and multiply it for a whole team and youÂ´re nearly there. Stoke come into this fixture sat in fourteenth place. In their last game they found their first win in nine games against ten man Sunderland so theyâ€™ll be hoping for a boost as similar to us thereâ€™s too many draws.

You know what to expect with them, a big tall lad up front â€“ be it Crouch or the crap tattooed Austrian whose name ends with vic â€“ a tight workmanlike midfield whoÂ´ll compete for all sorts â€“ that will probably be Whelan and Nâ€™Zonzi with Adam lobbed somewhere in there, the meth teethed ex kopite beaut â€“ and two fast wingers who canâ€™t wait to put a cross in. Jonathan Walters will be around somewhere too.

Defence are massive and dirty. Huth is out so maybe a wee bit less dirty, so Shawcross, ok really dirty, and probably that big galoot Cameron. With two similar cyborgs at full back. Were gonna score nada off set pieces and be jostled the living crap out of on any ball not on ground level played into their box. Their keeper Bergovic is ace if you do get past that midfield and defence anyhow. You can see why they score enough points to never really be sucked into the vortex of relegation. Just a bit weird that they have minted owners who have spent a few bob as looking at that team youÂ´d be asking where its gone? I know, I know theyÂ´ll be doing that Delilah thing and getting awfully excited over our perennial lack of singing but after having to tolerate the kopite teds for your most recent trip to Goodison theyâ€™ll be almost a pleasant experience for you. Unless they go a goal up, then fat Tez from town will be insufferable with his top off doing calm down gestures and thinking heâ€™s the funniest man in his postcode.

He isnÂ´t of course and his wife is a fat mess who resembles a wrestler but he can drink ten pints in one hour and once scored a treble twenty when the lard perspiring fat sex pest and greatest man ever to come from the Potteries â€“ Phil Taylor â€“ came into his pub for a pint of mild. Taylor nodded in recognition and for Tez he ainÂ´t ever gonna beat that feeling. Forget it.

Just fuck off everyone, you´re not Everton.

Up front its that one man rape show called Lukaku. Using rape, figuratively, as an expression of how he mistreats the opposition defence and not as in trying to feel up a couple of young girls in a motorhome as the aforementioned Phil Taylor lost his MBE for. No chance, this is A1 centre forward that we are witnessing this season in a royal blue shirt and despite having a poor game all round really he still scored twice against the shite and scared the living bejesus out of them. Just love us Romeo, love us loads and agitate for a cut price move. YouÂ´ll never have to buy another bevvy on Merseyside and can smash as much pretty orange skinned prominent eyebrowed birds for the rest of your mortal life.

Pienaar should start but I wouldnÂ´t be surprised to see Deulofeu pushing soon. Barkley played very well last game out and hopefully can kick start a run of form similar to what we seen at the beginning of the season. Mirallas is boss, no two ways about it. We saw what he done and knew exactly why he done it and would like more of the same. Plus heâ€™s dead fast, looks like heâ€™s had an eye transplant and is capable of doing all sorts of boss things which we need to see more of.

Barry and McCarthy in midfield will relish such tight occasions with a bit of needle in them. TheyÂ´ll be protecting a changed defence. Now thereâ€™s rumour of going to a back five but who will benefit from Bainesâ€™ injury? My money is on Bryan Ovideo. Heâ€™s a natural left wingback, sound going forward and with pace to burn. He isnÂ´t defensively as sound as Baines but he got to learn that sh*t sometime and of course heÂ´ll be a pale shadow on set pieces and just general all round ace left back play. But heÂ´ll do.

Along him will be Distin, Jagielka and Coleman plus one more if we play five, likely Alcaraz or Stones. If thatâ€™s the case then someone in midfield will miss out and Iâ€™m bored enough with having to ponder whoÂ´ll play and where so IÂ´ll leave that to your idle speculation.

Behind them all will be a bored American with too much money experimenting with facial hair but one whoâ€™s having a good season so weÂ´ll overlook that. WeÂ´ve all been there havenÂ´t we? Remember trimming your first sidie? When it stretched far enough down and looked dense enough even though absolutely no one else noticed it? You look sound lad. Reaching the finish line of an unenthusiastic preview to be celebrated, like finding out Nigella Lawson is in essence a ditty beakwhore and therefore absolute primed up for all sorts in the right environment. WeÂ´ve got a midweek game next week â€“ DIE MOYES DIE â€“ so its important to start a three game sequences off in proper fashion.