Thereâ€™s a tendency in media infested football to overstate games, indeed if youâ€™ve been unfortunate enough to read more than one of these previews then youâ€™ll know I fall victim to it too. Itâ€™s just a game of togger, after all, between our beautiful team in royal blue and an opposition team full of bells who take on the pantomime villain status for a couple of hours. Good working class entertainment all told. But during a season thereâ€™s ebbs and flows, and games of such importance that they define the outcome of a season and indeed the immediate future of the club. Weâ€™ve been sadly in QPRâ€™s position to feel their woe from last weekâ€™s game and these days weâ€™re scratching like a crazed animal on the oak door of the top table of English football. Not where Everton should aspire to but in that horrible perjury that we have to snap out of it.

So, this game is f*cking massive.

We go into it in fine fettle with thirteen points out of fifteen achieved and considerable momentum but Arsenal away has seldom been a happy hunting ground for us, particularly of late. Weâ€™ve had some dreary stats that weâ€™ve overcome in Moyesâ€™ time, winning at Leeds and Spurs for the first time in beards for example, and although the biggest stat is eighteen years without a trophy â€“ the next one used as a stick to beat Moyes is never winning away at the top four. Not the current top four like but the top four about five years ago. Anyway, you get the message. We came within a pubeâ€™s width of it in the snow with a sexual Pienaar chip a couple of years ago but Rosicky cannoned one off Lucas Neillâ€™s arse and that was that. The QPR game was a professional job. A nice composed two nil home win without any drama. Standard Everton in happier days. It could have been a pain in the arse but every player knew his job and QPR didnâ€™t have the organisation nor workrate that our players had. Makes a big difference. Big money signings donâ€™t always work out eh?

Everton are confident without too much expectation and have their bit between their teeth. Playing nice simple passing football and not letting a single ball be contested without a meaty challenge or two. The Everton we like. I feel a tw*t to mention it but itâ€™s the real pressure games where weâ€™ve sometimes fell short. Fans and players alike suffer a certain anxiety, like being told when you were seven years old that if you swallow chewing gum that it wraps around your heart and you die.

Many of you havenâ€™t swallowed chewing gum since. And Everton need to do their thing and take apart a team in the Champions League places with the pressure right on to give themselves that little bit of extra belief that will be needed to push on and really trouble the top five. No excuses, no hard luck stories, no what ifs, just Everton monstering the opposition from first to last whistle. 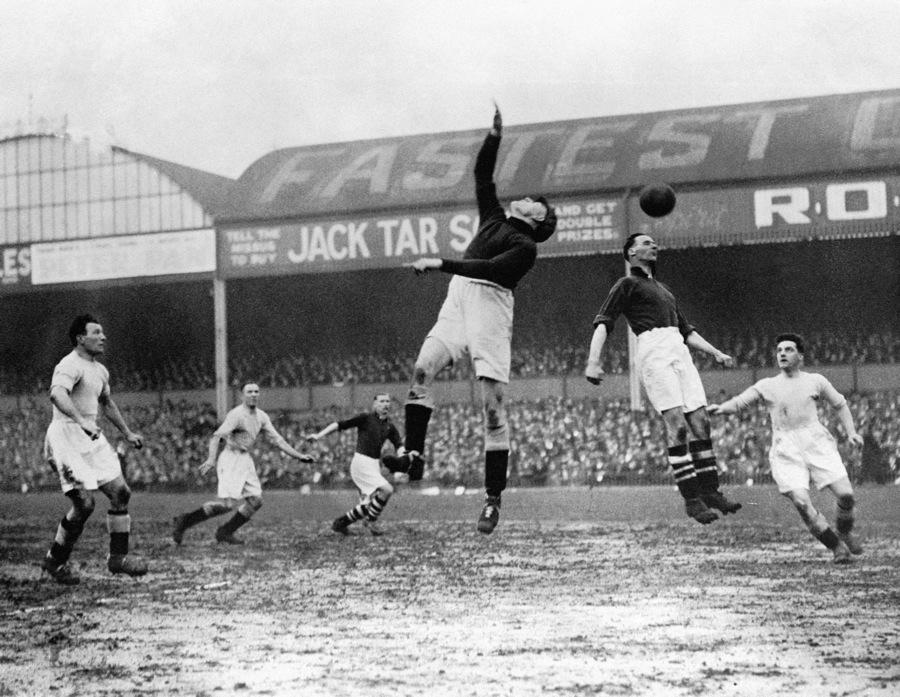 Not too much to ask? Well thereâ€™s a fine Arsenal team standing in the way and thatâ€™s one of the good reasons, as Moyes attested, as to why weâ€™ve not had much success there. They were meant to be falling apart earlier in the season according to that previously referenced rabid media but have steadied the ship and a young side has certainly found some traction in the league of late. Theyâ€™re sat in third place.

Up front theyâ€™ve felt the loss of Van Persie but I doubt thereÂ´s too many teams in the world that wouldnâ€™t. Theyâ€™ve had a combination of Giroud, Podolski and Gervinho â€“ who I canâ€™t help but thinking just needs a warm mammal on top of his head for a day or two to hatch it â€“ up front to try and alleviate that. While none of them have stood out, they all bring contrasting styles to the table and its working in the league.

Weâ€™ll see Arteta looking weird in red and no doubt heâ€™ll receive a clap but would you rather him or Gibson in the middle of our team? Aye, tough one. Heâ€™ll probably be joined by Rosicky whoâ€™s recovered from injury in time. With Ramsey and Cazorla also options in that middle, you know what you are going to get with Arsenal.

Allowing them space to play is a bit disheartening as they can effortlessly pace the ball around at will. When you throw the direct pace of Oxlade-Chamberlain in the mix itâ€™s a potent midfield on its day whilst at the same time not filling you with absolute dread. You can imagine theyâ€™d be a nightmare to play at five a side but thankfully this is the full game and the ball can go above head height. OK, in as much words what Iâ€™m trying to say is to hurt them as theyâ€™re a bunch of tippy tappy quilts.

Mertesacker returns from suspension, the big pork footed melt, and will fight it out with Vermaelen and Koscielny for the two places in central defence. Sagna and Gibbs will be run up and down the wing all day if permitted and them against our attacking full backs could be a crucial area of dominating the play. Theyâ€™ll certainly be better than Jose Bosingwa unfortunately.

Fabianski is a rare beast for an Arsenal keeper in that he seems pretty solid. Nothing spectacular like, in a way same to Tim Howard, but heâ€™s a big doubt for this due to a rib injury and I couldnâ€™t tell you who will replace him without going onto an Arsenal forum which I canâ€™t be arsed doing for fear of being attacked by a potent cocktail of enforced cockneyness and smilies. Not unlike a Shamen concert circa early nineties. Anyway, whoever is in goal, just pepper them and get Anichebe to assault them with his huge back on corners.

No questions whoâ€™ll start up front and that is a huge compliment to the coming of age of Victor Anichebe. Remember that big lad who at 18 bullied defenders in the reserves? We saw some glances in the UEFA Cup with late cameos but then it all went a bit flat. Heâ€™s rightfully keeping Jelavic out of the team and will start up front. Heâ€™ll need to bully more than ever.

Fellaini returned to behind Anichebe from suspension and had one of his quieter games He usually turns it on against the top teams and troubled Arsenal in the reverse fixture as they couldnâ€™t deal with his size and movement. Big game needed here, and letÂ´s not discount Jelavic as heâ€™s currently not a bad option from the bench. Pienaar returned and along with Mirallas on the opposite wing they were quiet by their own standards, Mirallas in particular is one of the players weâ€™ll need for a big of magic if were to win this. I do hope heâ€™s up for it. Their full backs have pace and are good going forward but if Mirallas is in the mood it will be some game. Gibson needs to shoot more often, interesting to hear Moyes saying he needs an operation at the end of the season as heâ€™s playing well and in his own understated way is absolutely vital to how we perform. Like a modern day Bracewell of which type of players Evertonians definitely â€œgetâ€. Osman will be next to him, he needs to really step up as heâ€™s had a couple of quiet games.

Iâ€™m probably speaking far too soon but weâ€™ve finally found the habit of some clean sheets and that makes all the difference. It stops the anxiety of us going behind to a goal and guarantees at least a point. Jagielka and Distin werenâ€™t too troubled by QPR and this will be a much sterner examination but theyâ€™re in good form.

How boss is Seamus Coleman? All that needs to be said. Baines like Osman has gone into a quiet patch, donâ€™t get me wrong on a quiet day heâ€™s still no less than seven out of ten but again heâ€™s a game winning player of which weâ€™ll need a big performance. The ominous shadow of Jan Mucha seems to have kicked started Howardâ€™s season, a couple of really big saves against QPR kept the lid on the result. Well in.

I couldnâ€™t give two f*cks what happens between then and now because thereâ€™s a big game involving Everton. North Korea could launch a Flash Gordon style laser beam at America and South Korea could fall into the sea because of it. Those giant snails threatening Orlando could turn out to threaten human existence itself. But itâ€™s just not Everton is it? 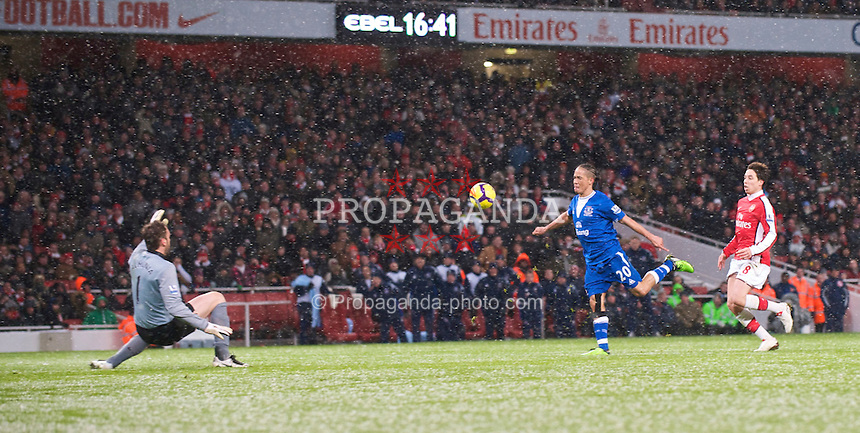 Medical science has proven that swallowing chewy doesnâ€™t lead to heart entanglement so all thatâ€™s needed now is for Everton to turn up and let Arsenal feel all the pressure. How much do you want it Everton?

Get the f*ck right into them blues.