Iâ€™m not very good at kopite rhetoric revisionism so am still a bit pissed off about Tuesday nightâ€™s exit. I didnâ€™t even go either so canâ€™t imagine how it was for a few thousand of you tolerating the sh*te weather and Pennines crossing to see a limp Everton casually stroll around a pitch thinking theyâ€™d take the game without much trouble. The squad rotation thing too, letâ€™s just swerve it as weâ€™re blatantly sh*t at it. Anyway, thatâ€™s that done.

Before that game we were enthusiastic about the lids in royal blue after a successive three goal away tonking, this time in deepest South Wales. Letâ€™s not beat around the bush; Everton were all that â€“ and a bit more too. Itâ€™s boss when we go after teams from the first whistle instead of playing pragmatically and looking not too disappointed with getting a draw. Helps when weâ€™ve got the players to feasibly do that. And we have. Maybe our second string are not all that but as far as first elevens go we have one of the best ones in the division. Southampton are back in the top division after a six year absence. They were a mainstay of growing up for many of us (27 successive seasons in the arl First Division) with the weird shaped half a stand at the Dell, fancy striped kits and receiver of some ace Goodison tonkings including 8-0 (Mr Fox says Bally scored the eighth and it was the best of the lot), a 6-1 with a Lineker hat trick and a 7-1 Gary Speed hat trick. They finished second last season on 88 points and played some quite super stuff for that division.

Itâ€™s been a slow start for them and a bit unlucky not to get a result against both of the Manchester clubs and despite a really good 4-1 against Villa last week theyâ€™re in the Liverpool zone of the table. Amongst many faults I have an annoying habit of never predicting an easy game so Iâ€™ll sway from that and get right down to it â€“ we should be beating these. Itâ€™s not just beating the football club but itâ€™s also ensuring a victory for humanity itself in playing a team representative from that part of Hampshire. Anyone whoâ€™s ever been down there will tell you itâ€™s like the bastard stepchild of southern England. A grey port with nothing really to write home about. Theyâ€™ve also got the cheek to be fuming at us wanting to compete with them to put more Cruise Liners into our city. Letâ€™s explore that for a moment.

Southampton or Liverpool? Tough choice. Both have got a Titanic connection but thatâ€™s where it stops really. Do you know on cruises where the ace teethed annoying bells invite you to a compulsory safety meeting which turns out to be a sales pitch for excursions? How do they entice you off the boat in Southampton, never mind charge you for it?

Thereâ€™s bound to be a titanic exhibition but thereâ€™s no real connection to there. The boat just sailed from there. What else is there in Southampton apart from loads of office space to hire? The whole place screams averageness. If the communists took over England then Southampton would be the administrative capital, it would be our Ankara but no one would give a flying f*ck. â€œItâ€™s near France thoughâ€. Yeah soâ€™s f*cking Lichtenstein. And the people there have evolved in the past 80 years so itâ€™s currently one step ahead of Southampton.

So pipe down Southampton, or weâ€™ll really f*ck you up and take the lot. Including your daughters. Well itâ€™s near France isnâ€™t it?

Theyâ€™ve got some rum players though. Local lad Ricky Lambert is their big hero grock up front and has done well with some goals in their early games this season, including two last time out in the league against Villa. Heâ€™s a local lad, not sure if heâ€™s a red or a blue but heâ€™ll be no less motivated to make it count in front of presumable watching relatives. Whether heÂ´s a boyhood blue or red is down to the Echo to advise.

I think theyâ€™ve been doing that three behind a front man thing that we have, so Barca apparently. Itâ€™s more en vogue then buttoning all your buttons up on your polo shirt. Theyâ€™ve got some options too â€“ recently drafted into the England squad that Lallana lad is a very decent player and adept at causing havoc in the space between defence and midfield -presently known as The Phil Neville Triangle. The only way to escape from it is to do four consecutive stepovers â€“ or to get the increasingly static Neville booked early on and timidly trying not to get sent off for the rest of the match. 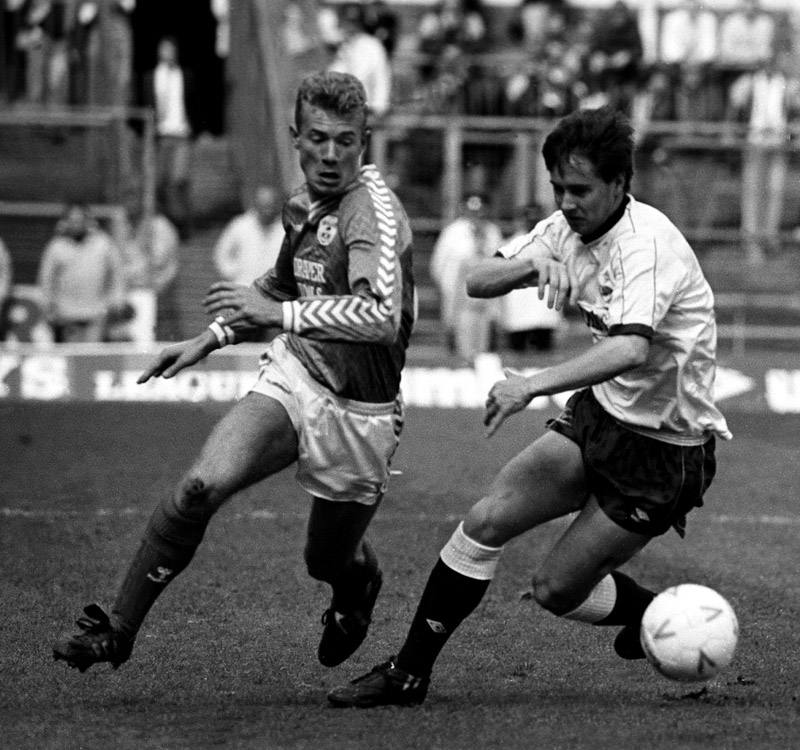 The fast little Puncheon â€“ think he scored against us for Blackpool â€“ gaves them pace and some width. Theyâ€™re also signed Gaston Ramirez for loads of money which is as suspicious as the trampiest lad in your class turning up one day in full mid Reebok Pump. Not the cheaper ones with a green trim, but the full on basketball for a pump ones. Heâ€™s meant to be boss but I suppose weâ€™ll see. Schneiderlin and Davis will provide some balance to the attacking they have in the middle, the latter being their Stolen from Ivor version of Naismith who gave one of the worst Everton performances in recent times in mid-week. That hat trick against AEK seems beards ago for us both Steven.

Defence is their supposed Achilles heel. It was surprising they never strengthened it before the transfer window closed so itâ€™s the bit where we have to get at them. Itâ€™s all well and good saying this but itâ€™s lesser susceptible to a doing over when youâ€™re away from home and generally playing deeper than the opposition. Itâ€™s unsure whoâ€™ll start there but probably that the big lad Jos will, who looks like when you put one half of your face in the mirror and move the eye furthest apart[/URL], giving you an almost amphibious like appearance. Heâ€™s their tallest lad so will be all over Fellaini. 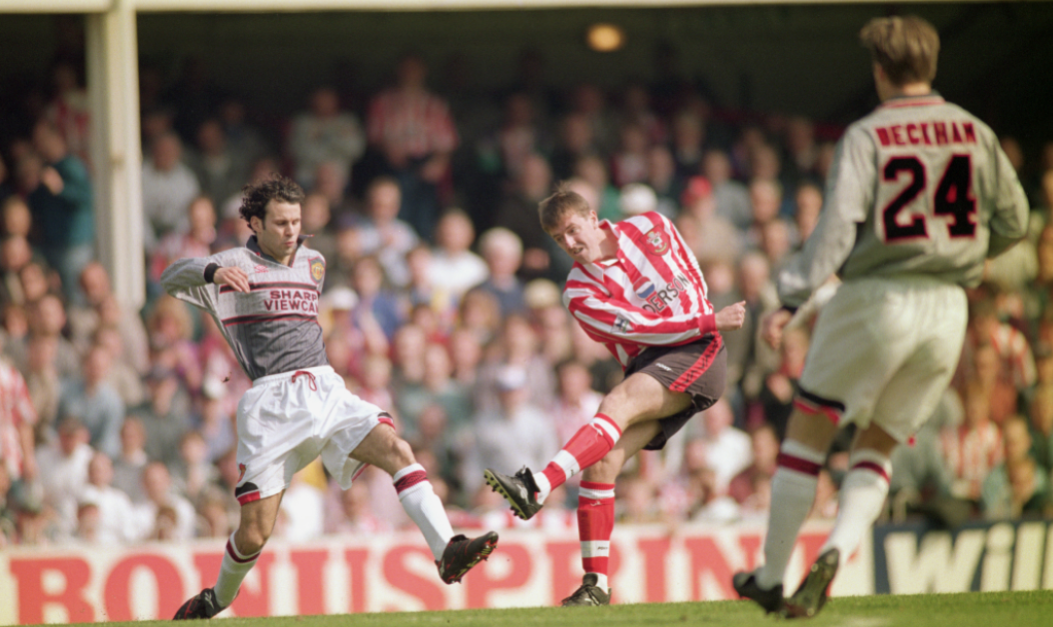 The young rapid thing at full back is that lad Clyne from Crystal Palace despite a sometimes less than assured start should go on to make a very decent player at this level. Who makes up the rest of the defence I donâ€™t know and to be honest Iâ€™m not arsed. Theyâ€™re managed by the Marks & Spencers Curly Watts himself, another scouser in Nigel Adkins. Welcome home lids.

Now Everton. Consistency has not been our thing for a long time. When we build some form of momentum weâ€™re often waiting for the inevitable slip and itâ€™s hard to work out why. In terms of footballing mysteries itâ€™s right up there with who wears Jack Wolfskin clothing? They clearly spend a bomb on advertising but Iâ€™ve not seen anyone wear it or even it sold in shops. Maybe itâ€™s not lid or alpine enough for anyone with an L postcode.

Jelavic is fit which soothes the nerves but itÂ´s left Moyes with a little bit of a dilemma. Not that Jelavic shouldnÂ´t start ahead of Anichebe but in that the latter does not deserve to be left out. ItÂ´s been a very long overdue week for him. Not only slotting in successive games but in adversity, during the Leeds game he was one of the only first team players on the pitch to come out of it with any credit. He generally gave a f*ck and chased down balls, even dispossessing one of their ugly right hand side players in the left back slot at one point. His game will be judged on what he does in the final third of the field but when the chips are down it was really nice to see him busting a gut and not snarling at the referee.

Fellaini is going to start behind whoever plays furthest up top because as it stands thatÂ´s where heÂ´s best. Defences hate trying to deal with him, he brings others into player fantastically and is a very decent goal threat. Whether he remains there long term is another but heÂ´s excelling there and long may it continue. You see what weÂ´ve been missing with CahillÂ´s decline for the past couple of years.

Pienaar is ace like. You seen the difference between him on the pitch and off it midweek. With him there we just generally play very decent soccer. Miralles was good on the weekend but not so effective on Tuesday, you can see weÂ´ve potentially got a player here though and heÂ´s full of that pace and shooting thing which weÂ´ve so lacked in the past couple of seasons – heÂ´ll start on the right. ItÂ´s probably Neville and Osman in the middle and against this type of opposition itÂ´s either going to be a good day for them or an orchestra of moans by the 64th minute.

Not sure with the defence. JagielkaÂ´s gone from being most peopleÂ´s third choice a couple of weeks ago to our own really defender in any sort of form. Heitinga didnÂ´t look settled at all in the past two games, hopefully heÂ´ll find form soon. Distin is not too hot at the moment but heÂ´s valuable on the pitch for his speed and also his big manly shape, useful against forwards like Ricky Lambert. Perm any two from three. The quite fantastic Baines will be left back and its between Hibbert and Coleman for right back. ItÂ´s too harsh to criticise Coleman after only two games but I canÂ´t help but feel that heÂ´s sort of in right side purgatory. HeÂ´s neither going to cut it full time at right midfield nor right back, but if Glenn Hoddle was the manager then heÂ´d be a boss right wing back. But this ainÂ´t Pro Evo 4. Crucial few months ahead for him. Mucha with his head like an urban car park will be replaced by Tim Howard – who deserves some nice words from bouncing back and producing some really top notch saves against Swansea at crucial times too.

A pivotal game. Either we push on keep this wee early boss thing going or we end up all out trying to grab a desperate late equaliser, such as the norm in these type of games. WeÂ´ve got more than enough to beat them so hopefully we get at them again from the very first whistle and do what we can do.

ThereÂ´s a nice cherry of us being potentially top at full time if results go our way so there canÂ´t be much better incentives to tonk them out of town. Or a tense one nil. WeÂ´re not fussy. WhatÂ´s our name?