Before the match with Newcastle United at Goodison Park on Monday night, Everton united with Liverpool as they paid their respects to the 96 Reds fans who died at Hillsborough.

Everton were led out by two mascots – one wearing the blue kit and another wearing the Liverpool strip. The mascot in Blue colours wore No.9 while the mascot in red colours had No.6 and they stood side by side displaying 96.

EvertonÂ´s ball boys for the match also wore tracksuits with the number 96 on the back. 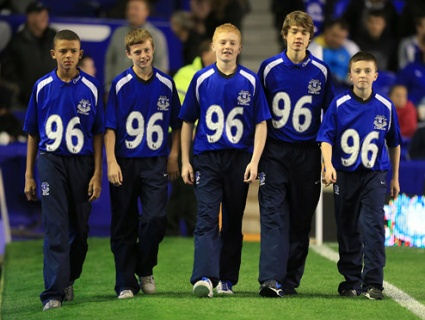 Before kick-off the club observed a minuteÂ´s applause and a moving montage of the 96 was played on the big screen accompanied by The Hollies classic anthem Â´He AinÂ´t Heavy, HeÂ´s My BrotherÂ´.