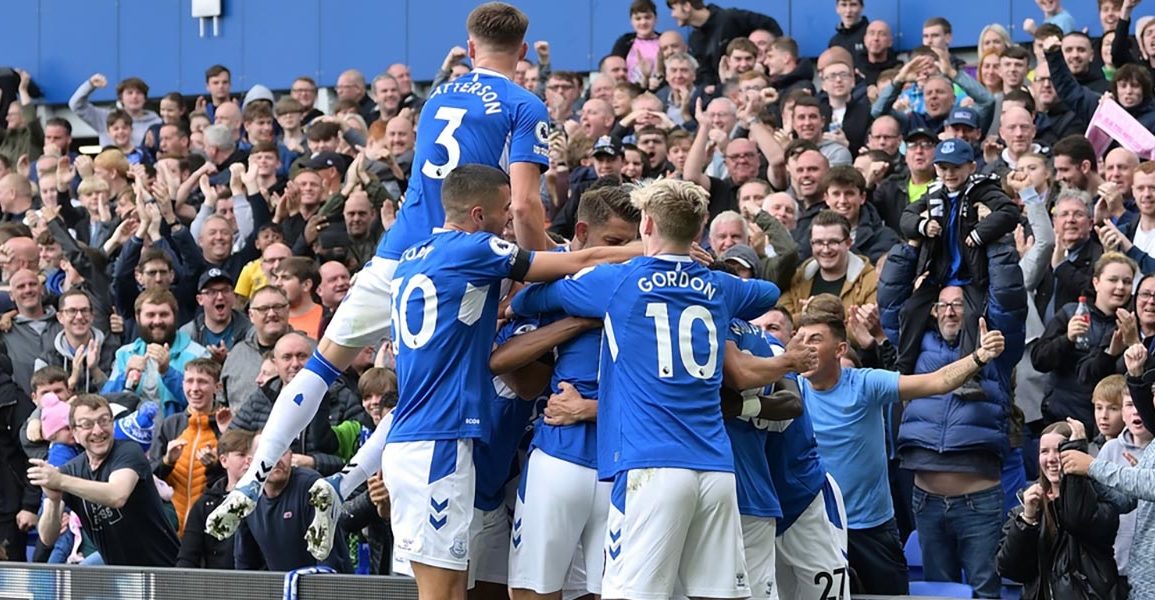 Your September/October Everton Player of the Month

In a change from our normal awarding of a Player of the Month, and as a result of the cancelling of games because of the death of the Queen, September saw just two games played. As a result, after an emergency cheese, port and Havana cigars all-night session of the GOT hierarchy – that saw everyone completely bombed – we decided to merge the Man of the Match polling results for September and October into one announcement. In similar vein, because of the World Cup, we will also combine the polling results for November and December.

As explained, September saw just two games played: a scoreless draw with them from across the park and a long-awaited first victory of the league campaign as West Ham were beaten by a solitary second half strike from Neal Maupay.

The ‘derby’ was a decent showing by the Blues and had a good chance for Neal Maupay not been well saved by Alisson, we’d all have been dancing in the streets afterwards. The Blues also had a ‘goal’ from Conor Coady ruled out for offside and Alisson denied Dwight McNeil late on tipping a deflected shot over the bar.

Conor Coady skippered the Blues against West Ham with Jordan Pickford out injured and the game was settled early into the second half as a great ball from Alex Iwobi found Maupay just inside the West Ham are and he turned quickly to fire an early shot that Fabianski couldn’t reach and his first goal for his new club earned that vital first victory of the season.

October saw a return to a proper calendar with six games, opening up with a long overdue victory away from home as the Blues came from behind to beat Southampton at St.Marys’. Having fallen behind in the 49th minute, the Blues hit back quickly with Conor Coady poaching the equaliser and securing the lead and with it, the victory, as Dwight McNeil lashed in the go-ahead goal – all three scores coming in the space of just over five minutes.

Manchester United at Goodison was next up and the Blues got away to the perfect start with Alex Iwobi curling a delightful opening goal beyond De Gea on five minutes. However and for whatever reason, Everton failed to capitalise on that bright start and allowed the visitors to not only get back on terms by the 15-minute mark through Antony, they allowed the visitors to dominate the play and when Casemiro released substitute Cristiano Ronaldo down the left flank, all our fears of him putting them ahead and beyond reach were realised.

Road trips to Tottenham and Newcastle were hugely forgettable affairs from an Evertonian perspective as both games were lost and the lack of attacking efforts in both games really began to set alarm bells ringing.

Crystal Palace at Goodison was something of a must-win game and in contrast to the previous three games, the Blues came out in a positive frame of mind and took the game to Palace from the first whistle. Dominic Calvert-Lewin started and scored the opening goal of the game, winning a 50-50 to find Amadou Onana who played the ball forward quickly to Alex Iwobi. A smart turn and ball into the area for DCL saw his bustle his way past a defender to slot a low shot into the bottom corner. The second half saw the Blues cement their best win of the season to date with a superb length of the pitch move that ended with Guaita in the Palace goal only able to parry a shot from Vitalii Mykolenko and Anthony Gordon on hand to tap in the loose ball. Goal three was poetry in motion as Dwight McNeil drove forward with purpose and his ball into the Palace area for Alex Iwobi saw our Nigerian star play a delightful backheel pass perfectly into the path of the former Burnley man who coolly slotted the third.

Another trip to the capital saw Everton become the first team to stop Fulham from scoring at Craven Cottage this season. However, this was not the performance many Blues fans hoped for after the tonking handed out to Palace and whilst a point on the road is always welcome, we had to be thankful that Fulham striker Mitrovic didn’t have his shooting boots on.

So, September and October had seen a total of eight games with three wins, three losses and two draws for eleven valuable points secured. A total of nineteen players were used through those eight games with nine players featuring in all eight and four – James Tarkowski, Conor Coady, Vitalii Mykolenko and Alex Iwobi – playing every minute.

After totting up all the Man of the Match Poll voting we can confirm the following individual game vote winners. Jordan Pickford was an overwhelming winner of the poll for the ‘derby’ and Alex Iwobi scooped the plaudits for his role in the win over West Ham. Had we done Player of the Month for September, Jordan Pickford and Alex Iwobi would have been back up by Nathan Patterson who polled the third most votes from those two games.

Into October, and his goal and leadership qualities saw Conor Coady win the Southampton game poll; Alex Iwobi for his stunning strike earned the Manchester United game while James Tarkowski polled the highest for both the away games at Tottenham and Newcastle. Alex Iwobi once again topped the voting for the crushing of Crystal Palace and a stalwart defensive effort at Craven Cottage saw Vitalii Mykolenko take his first Man of the Match award.

Looking purely at October and Alex Iwobi headed James Tarkowski by narrow margin with Vitalii Mykolenko a very creditable third place. However, the decision to combine the two months saw a different outcome for the Player of the Months award.

As we always say, GrandOldTeam.com takes great pride in offering (hopefully) the quickest match report service and we encourage all Blues, everywhere to sign up to the forum and vote in our Man of the Match polls. Every vote goes towards these Player of the Month awards and the ultimate accolade at seasons end, the awarding of the GrandOldTeam.com Player of the Season accolade.

And so finally, we come to the combined polling result for September and October… and in third place on the podium was James Tarkowski.

In the runner-up spot and continuing his good form ahead of the World Cup was England’s Number One – Jordan Pickford.

Out in front and taking his second Player of the Month Award having gleaned just under 22% of the total votes polled over the eight games in September and October, our winner and the congratulations go to… Alex Iwobi.