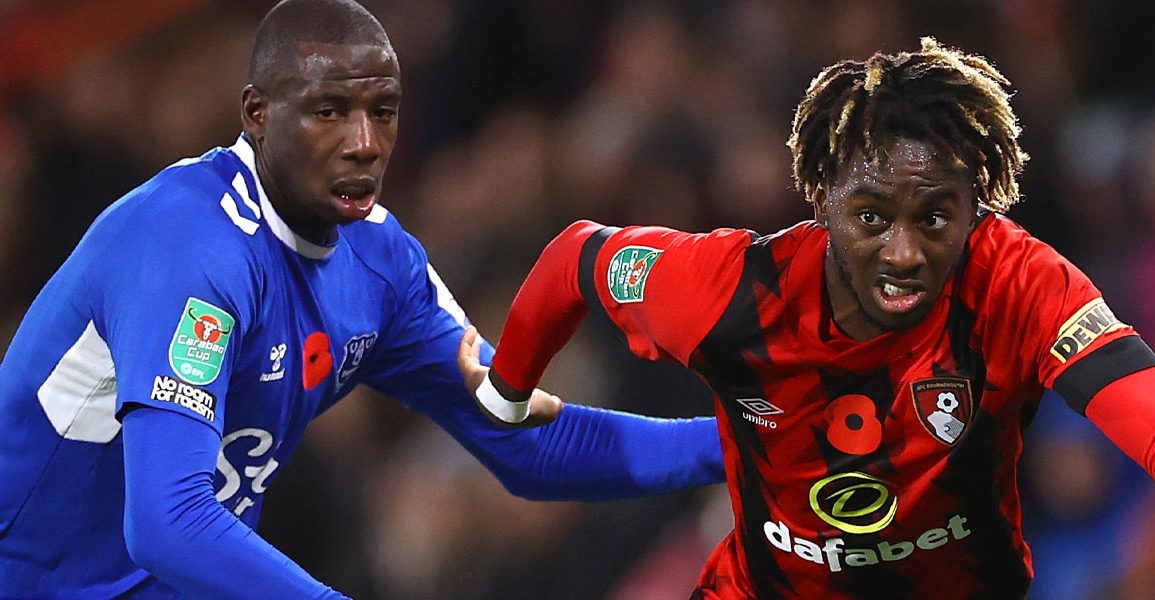 Toothless Blues dumped out of the Cup.

Everton failed miserably on Tuesday night as the long journey to Bournemouth ended in an embarrassing exit from the Carabao Cup with the first goal of the season for Demarai Gray being scant recompense for a, quite frankly, shocking performance. Frank Lampard will be a worried manager having seen his side fall behind early and never really recover and eventually ending up a well-beaten shambles.

Carabao Cup action on Tuesday evening took the Blues to the Vitality Stadium for the long-awaited third round clash with Bournemouth, just five days ahead of Premier League clash between the two sides.

Since the dismissal of Scott Parker, the Cherries have been under stand-in manager Gary O’Neil who had a decent start however, has seen his charges lose their last four games and twice throw away two goal leads against Spurs and Leeds. This loss of form has seen the south coast outfit slip to 17th place in the Premier League table, one point and one place behind the Blues but, with a significantly worse goal difference.

Would any of this league form count in the Carabao Cup and would the change of competition allow O’Neil, and indeed Frank Lampard, to rotate their squads in trying to reach the fourth round draw? Premier League survival was uppermost in the priorities of both clubs but, Tuesday offered a release from the tension and anxiety of the league campaign for both managers, both sets of players and both sets of supporters too.

In the last round, away at Norwich, O’Neil threw caution to the wind and was repaid as it was two of the Cherries academy players who stole the limelight – Dominic Sadi and Brooklyn Genesini – combining in injury time to score a late equaliser and force a penalty shootout that saw Bournemouth progress.

“That night was surreal,” Sadi recalled adding, “Just coming on in itself was amazing – to be making my professional debut. To come on with Brooklyn as well and how we went about it, everything about it was unreal. Going on to the next round and, hopefully, to play in front of the home fans this time will be another unbelievable experience.”

In preparing Everton for the cup tie, boss Frank Lampard had decisions on changes to make as Idrissa Gana Gueye, Amadou Onana and Dominic Calvert-Lewin were unlikely to feature having left the home loss to Leicester early through quadricep, ankle and hamstring injuries respectively. The manager remarked, “My intention is to get some young lads on the bench for the game, to have a feel of being part of it and to see if we can get them on the pitch. I’d like to think we’d have two, three, four on the bench, but I can’t guarantee that until we have a squad count up.”

Putting names to some of those in his thoughts and possibly to be part of the starting eleven, Lampard continued, “Stanley (Mills) has been doing really well, scoring regularly, playing well, and developing really well, so it’s nice to give players like that the opportunity when they come around. (Tom) Cannon is another one doing well. Reece Welch is there, too, so we will see how it works.”

Lampard highlighted the attitude of Mills as he pushes for senior level football when he added, “The biggest thing will always be the individual, how good they are and what level of player, what level of attitude they have. Stan has a great approach and attitude. That probably comes from his footballing background and his dad, who I know well. He was a great athlete as well as a good player.

He added a note of caution too noting, “Stan’s a very strong runner and has an eye for goal – he’s a good player. So, yes, he can be an option. But he’s still very young. We all know how hard it is at a young age to break through and have an immediate impact regularly, so it will be phased in for him but, for sure, he is progressing in the right way.”

With other changes possible in order to give other places a rest and others a chance to stake a claim, Frank eventually settled on a potential 3-5-2 formation with a starting eleven of: Begovic (c), Holgate, Keane, Mina, Patterson, Davies, Doucoure, Garner, Vinagre, Gordon and Maupay.

Incredible travelling support again for the Blues and it was them making the noise at kick-off time in a damp evening in Retirement Town. An early attack by the Blues saw Patterson find Maupay who played Doucoure into space, his low cross to the edge of the box being cleared by the home side. The Cherries forced the first corner and that saw Lowe hit the side netting without really worrying Asmir Begovic.

Everton fell behind just before the seven-minute mark as Stanislas found Lowe who wasn’t closed down quickly enough and he had time to line up a shot that took a deflection off James Garner to loop over Begovic and in off the underside of the crossbar… and once again, Everton would need to try and find a way back into a game.

Everton should have been level on 11 minutes as Gordon won a loose ball to find Doucoure and he split the home defence to find Tom Davies only for the ball to bobble as he took his shot and it sailed high and wide of the target.

Garner drove forward to try and set up Maupay and when the ball broke back to him, he curled a shot towards the top corner and it took an acrobatic save from Travers to deny him and give the Blues their first corner that failed to produce. The Blues got forward again and Vinagre got to the bye-line to cross and find Mina, his header down for Gordon disappointingly being flicked over the bar. Patterson on a charge down the middle of the pitch fed Gordon who saw his shot blocked by Mepham and go out for a goal kick.

Twenty minutes gone and apart from the slightly flukish goal that saw them trail, the Blues were giving a reasonable account of themselves. A good tackle by Davies launched another attack but, a couple of poor touches saw the move break down and the home side were able to keep the Blues at bay. Patterson again latched onto a loose ball and charged down the right flank before crossing just to deeply for Gordon arriving at the back post but, great intent from the young Scot.

The game fell into a quiet spell with neither side really making any impression on the other, Everton guilty of too much sideways and backward passing, being dare I suggest somewhat over cautious in their approach play when some invention and an injection of pace might have proved more rewarding. Bournemouth, on the back of that early lead, appeared happy to sit back and defend and counter attack when possible.

Into the final five minutes of the half and some of the travelling Blues support were becoming frustrated at the passive nature of the play – Bournemouth away on Tuesday night is a long way to go to watch some, at times, rather aimless and drab football. A poor challenge by Gordon on Zemura rightly earned the games first yellow card before two added minutes were signalled.

Keane with a good ball down the right channel picked out Maupay and he won the Blues a second corner that Davies took short to Gordon with Bournemouth easily clearing the eventual ball into the area from Patterson, and that saw us reach the break trailing to the Lowe fluke.

No changes by either manager for the second half that surely would see Everton at least try and be more assertive and taking the game to Bournemouth. And a pathetic stray ball inside two minutes of the restart from Mina saw the home side take advantage from the resulting throw-in, a slip by Holgate adding to the problem and a cross from the right was relayed on by Lowe for Stanislas arriving at the back post to have the simplest of tap-ins for two-nil.

Everton were now really up against it and on 51 minutes, Frank Lampard made a triple change Dwight McNeil, Alex Iwobi and Demarai Gray replacing Mason Holgate, Anthony Gordon and James Garner respectively.

A clearance by Keane was picked off and Stanislas and Lowe worked an opening for a shot that Begovic turned round the post for a corner that was defended of sorts before Mepham went down after a collision with one of his own players. Stacey on a charge was well tackled by Davies and the next Bournemouth raid saw then win a corner on their left that saw Stephens head over the bar.

Gray raced onto a ball from Patterson to cross from the right, Stephens heading behind for a corner that once again failed to produce anything positive for Everton. An hour gone and two goals behind away from home, this was going to take something of Lazarus proportions to see Everton come back.

Gray forced another corner off Stacey, took it himself, failed to beat the first man and a follow-up cross was easy catching practise for Travers in the home goal. Christie and Zemura on a counter attack saw the latter cross for Lowe who headed over the bar when he should have at least tested Begovic. The Cherries made a double change on 65 minutes, Fredericks and Marcondes replacing Zemura and Stanislas.

A little over 60 seconds later though, the arrears were reduced as a good ball from Alex Iwobi picked out Demarai Gray and he shifted to his right before curling a lovely shot well beyond the reach of Travers.

Everton were clearly lifted by the goal and Iwobi, fed by Maupay, saw a shot blocked to safety by the Bournemouth defence. Twenty minutes left and with the home side having recently coughed up two two-goal leads, could the Blues yet find a way back roared on by the travelling fans who surely deserved something for their troubles.

Dembele for Rothwell on 74 minutes was the third Bournemouth change and with Everton huffing and puffing to get forward they left themselves open to a counter attack and when Dembele got free on the left to cross for Lowe, Begovic did well to parry his shot but it fell for Marcondes to sweep home for a 3-1 lead with a little over eleven minutes remaining.

Doucoure and Maupay made way for Stan Mills and Tom Cannon as Frank Lampard took his final roll of the dice. But it was game over second later as Bournemouth took advantage of an error by Patterson and Dembele was quick to set-up Anthony to make it 4-1 in 82 minutes.

Pearson and Mina were both yellow carded for some nonsense as the home fans chanted, “we want five” and the forlorn Evertonians headed quietly for the early exit. Two added minutes were announced and played out almost meaninglessly as the result had been beyond doubt from the opening minutes of the second half.

Where do Everton go from this shellacking as pressure will surely be heaped on Frank Lampard to get a result in the league game on Saturday, and after this performance, there won’t be too many people expecting that to happen.