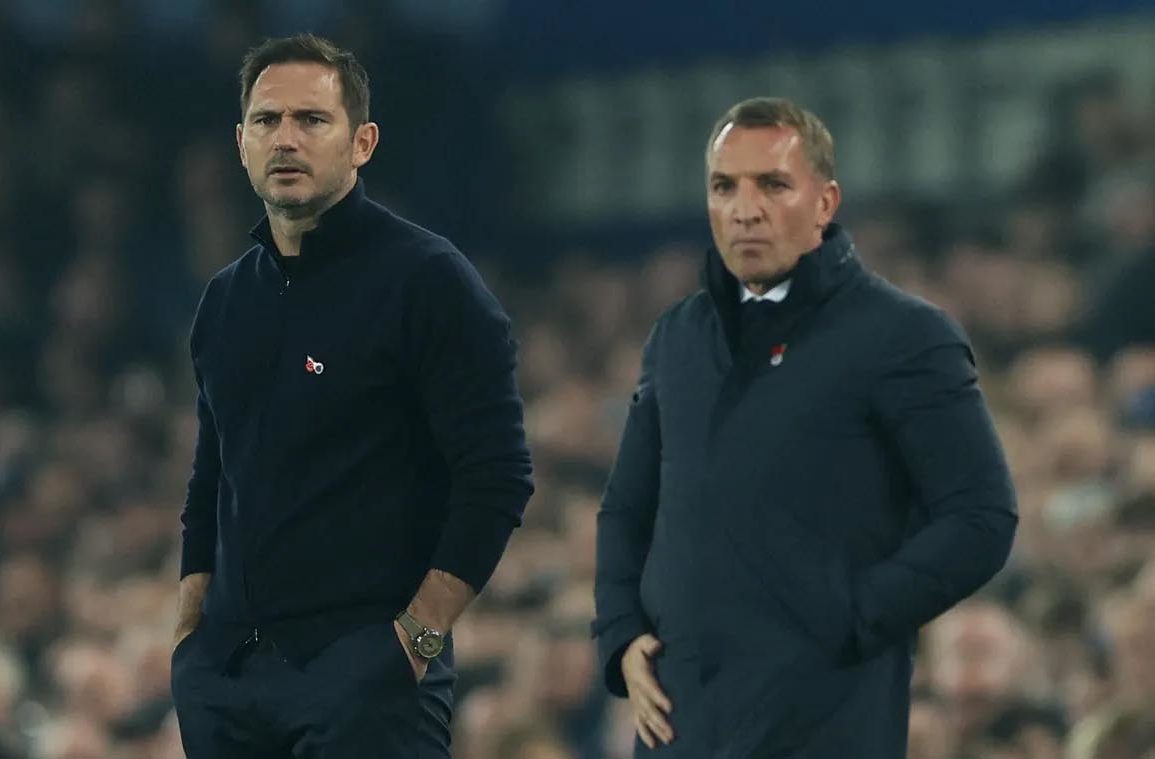 Everton fell to another home defeat as a well drilled and slick footballing Leicester City eased their worries with a consummate performance on the road, topped off by clinical strikes from Youri Tielemans and Harvey Barnes.

With the World Cup looming, a Bonfire Night visit of Leicester City was the last game at Goodison until Boxing Day, so would we see fireworks from the Blues and send the Brodge home with his tail well and truly between his legs?

Everton gained a point from the visit to Craven Cottage last time out, with the defence again in excellent form to earn the first clean sheet of any visitors to Fulham this season however, the lack of a finish to the few first half chances we created again highlighted the key area of concern for manager Frank Lampard.

Addressing the media on Friday, Lampard noted, “We want to play like we did against Palace. We want to play with an energy and intensity in our game and with an idea. We just have to keep believing and understand we have to work for that.”

He added, “We have three big games coming up now before the break. It would be great to finish this block well, going into the World Cup. Consistency is what separates the top boys – the ones who win titles – from the rest in the league. We have to strive to control what we can, how we train, how we prepare, and hope the result of that is starting to win back-to-back games and getting consistency on that front.”

When asked about how pleased he is with the new look defence, the boss was keen to highlight the role England’s number one has played saying, “Jordan is in the top bracket of goalkeepers in the world, in my opinion. He’s a great professional, so it’s just a case of him doing his job really well. At the minute, we have good individuals doing a good job and there is a structure to our team. I think defensively from set pieces, we’ve been very sound, so we need to continue with that. We can also score more from set pieces.”

Turning his attention to the challenge of Leicester and his selection options, he advised that both Ben Godfrey and Yerry Mina are now back to full time training, meaning only Andros Townsend – recovering from a torn ACL – isn’t training with the rest of the squad.

The Foxes arrived at the Grand Old Lady three points worse off than the Blues and languishing in the bottom three places, a position many feel is somewhat false given the quality in the squad.

And they came with a major fitness concern, over captain Jonny Evans while midfielder Ricardo Pereira continues to recover from a ruptured Achilles’ tendon and won’t see first team action before the turn of the year.

Foxes boss Brendan Rodger’s was unsure if Evans would make the game at Goodison or make a return against Newport in the Carabao Cup when he said,”It’s been a little bit slower than we’d have hoped but, he was out training with the squad today so we’ll evaluate the risk on that and take it from there.”

Looking forward to the game, Leicester’s England winger Harvey Barnes said, “It’s always a tough game when you go there. For us, we’ve had some mixed games when we’ve been there. We know, after the last few games that we’ve played, that if we’re playing as we have been, we can certainly go there and get a great result and hopefully put on an entertaining game and score some goals.”

Rodgers’ and Leicester had a very quiet summer transfer window with more departures than arrivals, the most notable being the exit of goalie Kaspar Schmeichel to Olympique Club Nice in France and it’s only in recent weeks that they have begun to recover from a very ropey start to the season. Knowing he too needed a positive result, Rodgers’ named his starting line-up: Ward, Castagne, Amartey, Faes, Justin, Soumare, Maddison, Tielemans (c), Dewsbury-Hall, Barnes and Daka.

On a cool, damp evening for bonfires and fireworks, our referee was David Coote.

With it being the last home game before Remembrance Sunday, Goodison observed the traditional laying of poppy wreaths, a bugler playing The Last Post and a silence for those that gave their lives in conflict down the years.

Dewsbury-Hall with an early cross into the Everton area nearly caught the Blues cold but, neither Tielemans or Daka could get on the end of it. And the visitors settled quickly to build again and a through ball to Daka saw him bring the first save from Jordan Pickford. An error at the back by the visitors allowed Dominic Calvert-Lewin to steal the ball and feed Alex Iwobi who saw his shot beat Ward and sadly, the far post.

The early minutes from Leicester belied their lowly position in the table as they moved the ball around confidently and at speed with Barnes and Dewsbury-Hall keen to attack the Everton right flank.

Coleman to gray to Iwobi and a quick ball through the middle for Dominic Calvert-Lewin was just too strong but, an indication that Everton too could be incisive. Tarkowski to Gana Gueye and he found Iwobi who immediately found Gray on the right, he skipped inside the first man but bent his rising shot over the target.

Soumare with a ball over the top saw Maddison play a one-two with Daka before shooting wide and the opening quarter of an hour had flown by.

Gana Gueye needed some treatment on his right thigh, a small delay that allowed the rest of the players an unexpected drinks break. The game went through a few minutes of indifferent play before Maddison and Dewsbury-Hall worked the ball left to Barnes who saw his shot go wildly high and wide. Everton hit back to win the first corner of the game that saw Ward turn a powerful header from Tarkowski round the post for another corner, that saw him adjudged to be fouled.

An innocuous challenge by Gana Gueye saw Leicester awarded a free kick 35 yards out that was defended and as Gray looked to break clear he was brought down by Soumare. Everton survived a concerted Leicester attack on the half hour, Tarkowski with an important block and then cleared a corner as the visitors came on strongly.

Goodison was getting a tad tetchy at the Blues being second best to too many balls and conceding possession and territory far too easily. Dominic Calvert-Lewin won a 50-50 in midfield and set off on his own, being forced left and seeing his eventual shot blocked and cleared. A quick counter by Leicester on an interception of a ball from Tarkowski saw them win a corner that came to nothing and we entered the last five minutes of the half.

Everton won another corner as Justin denied Coleman on a long ball from Tarkowski, McNeil finding the head of Onana who couldn’t direct his header on target. Daka got through to force a save out of Pickford, Mykolenko completing the clearance. A foul by Faes saw the ball fed quickly to McNeil and Mykolenko on the overlap to cross for Iwobi who saw his stooping header blocked and cleared.

Right on 45 minutes, Leicester took the lead as Everton failed to clear their lines properly and Tielemans hit a fine volley from just outside the area that beat Pickford who dived in vain to prevent it hitting the net.

Two added minutes were signalled and a deep cross by Coleman fell to Gray who was adjudged to have used his arm to control. The visitors led at the break and on the balance of possession, quality of passing and movement, and ideas… deservedly so. Of the two managers, Brendan Rodgers will have been the happier by a country mile.

A change for the second half saw James Garner replace Idrissa Gana Gueye in the midfield and he was straight into the action feeding Mykolenko to combine with Onana to win an early corner… that leaped to fast counter by Leicester that came to nothing.

Gray and Iwobi then combined to provide a through ball and gilt-edged chance for Dominic Calvert-Lewin but, Ward was quick off his line to block the shot away to safety. Daka racing into space onto a long ball from Amartey ballooned a shot into the Park End before the Blues countered with Onana taking a tumble with no free kick given.

Castagne needlessly conceded another corner on the Everton left that saw Tarkowski adjudged to have fouled Ward. Garner with a good interception saw him gain the Leicester area only for his flicked inside ball to be picked off and cleared to set the visitors forward again. A free kick for a foul on Iwobi brought ironic cheers from a disgruntled Goodison crowd before another quick break by the visitors saw Mykolenko defend well to prevent Daka getting away.

Maddison with a sweet turn to lose McNeil saw a shot hit the outside of the post and Everton breathed another sigh of relief. On the hour mark, Dominic Calvert-Lewin went down and was immediately replaced by Neal Maupay and Abdoulaye Doucoure made his return to the first team at the expense of Amadou Onana.

Vitalii Mykolenko was becoming more of an attacking influence and he combined again with McNeil to win a corner that saw Leicester break away again and the Ukrainian raced back to block a ball from Dewsbury-Hall aimed towards Barnes. Everton made another double change on 69 minutes, Anthony Gordon and Nathan Patterson replacing Dwight McNeil and Seamus Coleman respectively while Leicester sent on Vardy and Ndidi for Soumare and Daka.

Less than twenty minutes to play and could Everton find a way back?

Albrighton replaced Dewsbury-Hall on 77 minutes to further strengthen the Leicester midfield, not that it needed it as they had coped far too easily to this point with just about everything Everton had tried to impose upon them.

Iwobi fed Gray on the left to cross deep and win a corner on the right, that was easily cleared at the near post. Everton defended a Leicester corner from the right, and Everton ponderously got forward for Coady to cross and Ndidi block an Iwobi shot.

Leicester rubbed salt into the wounds as another quick break saw them double their lead, Harvey Barnes taking a feed from Maddison before smashing a shot past Jordan Pickford with less than five minutes remaining.

Many Blues had seen enough and headed for the exits as the fourth official signalled three more added minutes, that in all honesty couldn’t end quickly enough.

One hates to be critical but, this was a very poor showing from Everton who were second best to a Leicester side who looked totally in tune with each other for large tracts of the game. As one fan near me yelled, “just blow yer ****ing whistle ref eh”.