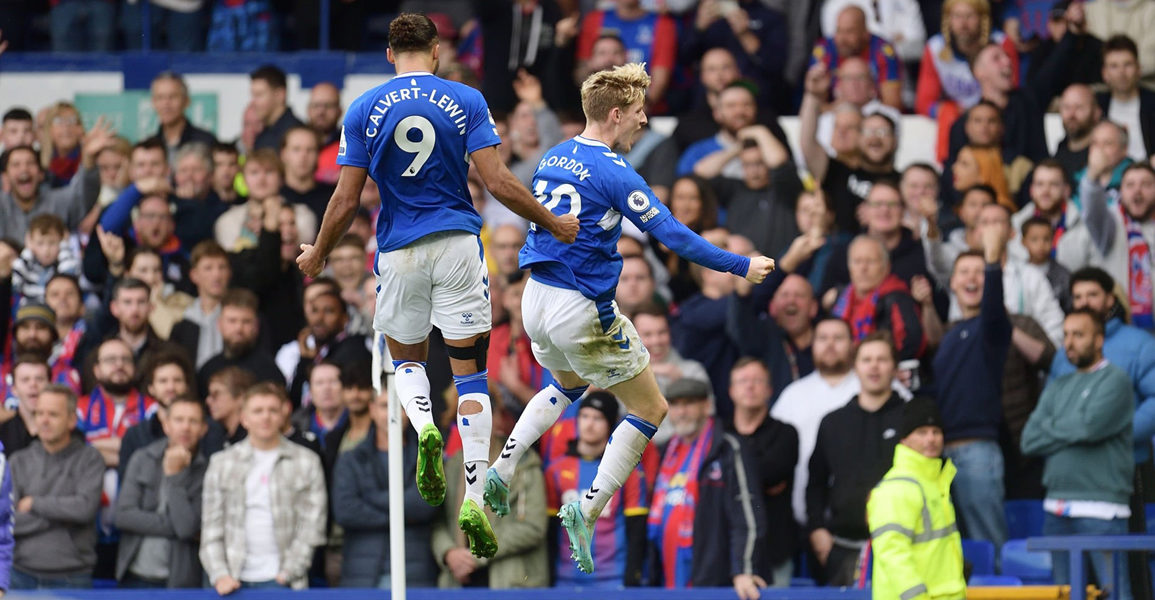 Frank Lampard got exactly the reaction he would have expected as Everton put their awayday woes behind them to consummately dispose of Crystal Palace in a game that, at times, threatened to boil over. An excellent strike from Dominic Calvert-Lewin in the first half was added to after the break by Anthony Gordon and Dwight McNeil in probably the best team performance of the season to date.

Three defeats in the last three games and certain sections of the media would have you believe pressure is mounting on Everton manager Frank Lampard so, the visit of Crystal Palace could be just the ticket as memories of that incredible turnaround against the same opponents last season would surely energise Goodison Park?

Without initially referring to the 3-2 result last season, Lampard said on Friday, “We’ve clearly had a tough run of games on paper against Manchester United, Tottenham and Newcastle. It’s probably shown us the reality of where we are at, generally, and in-house the reality of things we can do a bit better. The coming games are a good opportunity for us to show that we can improve.”

He added, “In the summer, the first thing we wanted to look at was the solid nature of the team. We have certainly improved that. The next phase is to continue with that and add goals. Hopefully the personnel we have and having Dominic back will help that. Our last home games, against West Ham and then in the second half against Manchester United, we were crossing and creating opportunities… we have to be a team that makes crosses and chances and stays in the opposition half.”

And looking at the next hurdle to be overcome, posed by Patrick Vieira and Crystal Palace he noted, “Tomorrow is a completely different animal against a very good team in Palace. But we’re back at Goodison and we have an opportunity to ask some of those questions. We can’t come away from the fact Goodison is special. When you think of the atmosphere we can create, when players come out and play with passion the fans relate to that, it’s a big deal for us. We have to use that as one of our weapons.”

And inevitably referring to last season he commented, “That was one of the best nights of my life. The magic of Goodison came through. We created a spectacular night. You saw what this club means. But we want to have special nights for different reasons, more positive ones. It’s our responsibility to work towards that.”

Crystal Palace are without doubt a club on the rise. Solidly placed in mid-table, their squad hosts a blend of skill, strength and tenacity – all qualities that manager Patrick Vieira demonstrated in his stellar career and that he is building with at Selhurst Park. Already the home of an intimidating atmosphere, the South London outfit have just been granted planning permission to rebuild their Main Stand to increase the capacity to 34,000 and Vieira commented on that saying, “It’s just one more step forward. You look at the facilities we have here, the facility at the Academy and now it is the stadium. The club is working to allow more fans to come and I think that is something that the fans and the players will love. The capacity will be even bigger, so the atmosphere will be in an even better place. It just shows how the Chairman has been building this football club.”

And the former Arsenal midfield general looked forward to the Goodison encounter saying, “It was a really good result [against Wolves] and a good performance. We found the quality and mental strength to get back and win that game. We know how difficult it is to go to Goodison Park because of the pressure and the atmosphere. We will have to be ready.”

Managers general shy away from praising individuals but, he enthused on the form of former Celtic striker Odsonne Edouard saying, “I am really pleased. He is in a really good place at the moment, playing every game and playing with confidence. He is linking with the players around him, working really hard and scoring goals. I’m really pleased with his performances, yes.”

Looking to avoid a repeat of last season and for a result to lift his side into the top half of the table, Vieira named his starting line-up: Guaita, Ward, Andersen, Guehi, Mitchell, Milivojevic (c), Eze, Olise, Ayew, Edouard and Zaha.

On a bright autumnal afternoon with conditions perfect for football, our referee was Simon Hooper.

Palace kicked off with Everton attacking the Gwladys Street with the low sunshine in the faces of the visitors defence in the first half and they won the first free kick as Olise fell over and the ref gave it as a foul by Gray. A long ball from Pickford found Gordon wide right and after a nice one-two with Alex Iwobi, the winger couldn’t find a telling cross.

An excellent ball from Onana sent Gordon free again on the right but his low ball into the Palace area failed to find a teammate and the visitors cleared. Everton were showing good intent and the first save from Guaita came just before ten minutes as he held onto a shot from Gray. But it wasn’t long before the home fans were celebrating as Dominic Calvert-Lewin won the ball in midfield, Onana found Alex Iwobi and his pass from the right flank picked out Dominic Calvert-Lewin just inside the are and he muscled his way past Guehi to plant a low shot beyond Guaita and into the far corner.

Milivojevic fired a long range shot well over the bar as Palace tried to get back on terms quickly before a flowing move begun by Coleman came to nothing on a poor final pass from Gana Gueye but, through the opening quarter of an hour, the Blues were fair value for their lead.

Palace responded with Edouard getting away from Tarkowski to try and find Zaha, Coleman scampering back quickly to deny the Ivory Coast forward. A great tackle by Onana won the ball for Iwobi to find Mykolenko to cross, Palace clearing before the ball could reach Dominic Calvert-Lewin but, another positive attack by the Blues.

Palace won their first corner as Tarkowski headed an Olise free kick behind, Andersen getting a header in that had no real threat to it and JP gathered easily. Eze brought down Gordon and was lucky not to see a yellow card, the free kick from Gray finding Tarkowski at the back post and his header back into the area saw Conor Coady and Milivojevic suffer a clash of heads and both needed treatment.

Another coming together saw Mykolenko and Ward get visits from the respective medical staff while elsewhere, Andersen and Coleman exchanged words and referee Hooper told them both to calm down, and to endorse he was the man in charge, he took the resulting drop ball to the centre spot, much to the annoyance of the home crowd.

A fine ball from Iwobi, back to his influential best, picked out Dominic Calvert-Lewin and after exchanging passes with Gray he crossed deep into the area where Palace put the ball behind for a corner that led to a quick second ending with Iwobi sending a volleyed shot just high and wide of the far post. Into the final five minutes of the half with Everton hounding Palace – a much better effort today all round it must be said.

Ayew with a clear pull and lunge at Gray somehow escaped a yellow card too, Gray with the free kick from wide ut on the left failing to find a Blue shirt and Palace cleared to try and launch a counter attack. Everton though were defending and competing well, Dominic Calvert-Lewin with a good old-fashioned shoulder charge on Andersen saw us to the three added minutes announcement.

Ayew got a final warning from referee Hooper for a poor challenge on Amadou Onana and the last play of the half saw Gray send a free kick to the back post where Tarkowski was adjudged to have fouled Guehi and the teams went to the dressing rooms with the Blues deservedly ahead.

No half time changes by either manager saw Everton continue where they had left off, pressing Palace aggressively although the first Palace attack led to a corner as Coleman denied Zaha who went down claiming a penalty and leading Pickford into voicing his opinion. A second corner saw the Blues clear their lines. Palace though had come out in a more determined fashion and Coady did well to deny Eze at the expense of a third corner.

The Blues responded with Dominic Calvert-Lewin, Gray, Iwobi and Onana trying to work an opening but, Palace defended stoutly. The pace of the game had, if anything, picked up and the physical contact increasing, Ayew colliding with Mykolenko and Andersen going down claiming Dominic Calvert-Lewin had caught him in the face. A long ball from Andersen picked out Mitchell but, Gordon got back to deny him a chance to cross. Both sides were competing hard, good individual battles all over the park as Palace prepared their first changes.

Just past the hour mark, Palace got forward in numbers and won a free kick just right of the penalty area, Olise going for the shot and sending his effort over the crossbar.

On 62 minutes, Vieira sent on Schlupp and Mateta for Olise and Milivojevic as he tried to inject some more offence into his team but, it worked against them as Everton countered and when Guaita could only parry the shot from Mykolenko found by Onana, Anthony Gordon was on hand to tap in the loose ball for two-nil.

Goodison was loud and proud and tempers boiled over following a poor challenge on Gordon by Zaha with his elbow and the referee took his time before booking James Tarkowski, Zaha, Guehi and Schlupp for their involvement in the post challenge pushing and shoving. Excellent defending by Tarkowski halted Mateta at the bye-line much to the delight of the Street End before another collision saw Demarai Gray yellow carded for a foul on Guehi.

Twenty minutes to play and this was a full-blooded game of football and on 72 minutes Dwight McNeil replaced Demarai Gray who received a standing ovation as he left the pitch. Zaha was now being booed with his every touch of the ball and Palace made a third change as Ayew was replaced by Ebiowei.

Excellent determination and tackling by Gordon saw the ball out of play to all Frank Lampard to make more changes as Neal Maupay replaced Dominic Calvert-Lewin and Amadou Onana made way for James Garner on 78 minutes. Mateta was the fourth Palace player to see yellow for a late tackle on Coady as we hit the 80-minute mark.

Andersen with a foul this time on Maupay gave the Blues a chance to put the visitors under more pressure and it produced a lovely third as Dwight McNeil drove forward, played a neat one-two with Alex Iwobi, lovely backheel, to see the former Burnley man hit the back of the net.

Anthony Gordon and Idrissa Gan Gueye made way for Abdoulaye Doucoure and Tom Davies as Goodison rightly hailed the Blues with a crescendo of noise and songs.

Three more added minutes and Zaha span away from Coleman to draw a foul from James Garner that earned him a yellow card, the shot from Eze going high and wide.

An excellent all-round team showing from the Blues who thoroughly deserved the three points to ease themselves above the visitors and into 11th place at the final whistle.