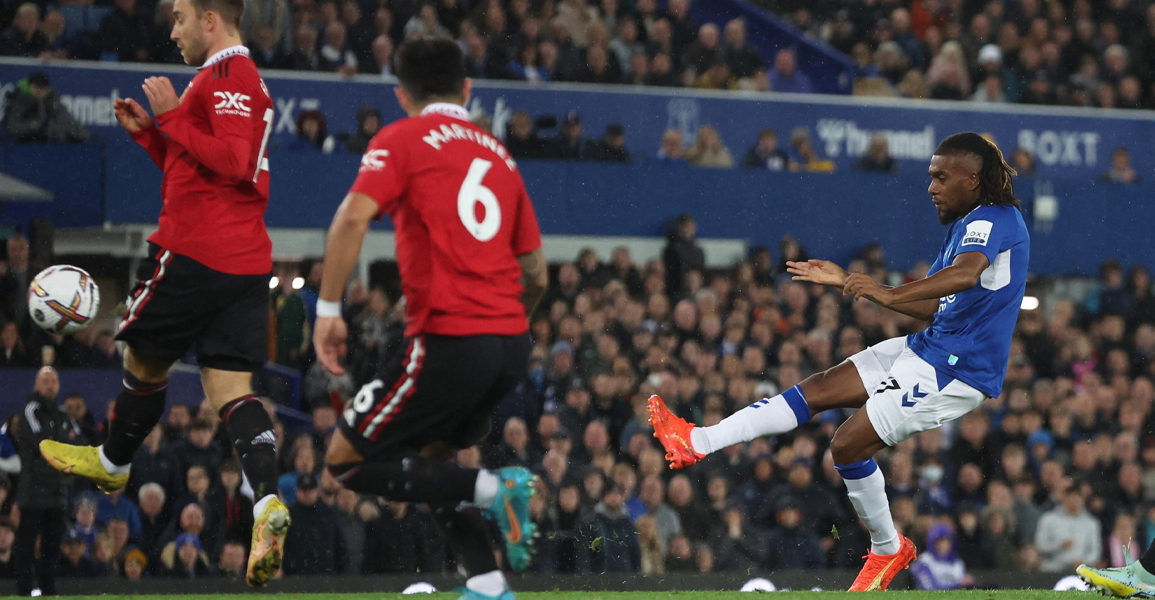 Early Iwobi strike not enough as United hit back to win.

A glorious early goal from Alex Iwobi got the Blues off to the perfect start but, they couldn’t sustain it and the visotors hit back with first half gals from Antony and the evergreen Cristiano Ronaldo to bring the Blues unbeaten run to an abrupt end.

Games under the lights at Goodison Park are always relished, especially by Evertonians but, 7pm on a Sunday evening is perhaps the oddest kick-off time the Grand Old Lady has hosted. We can only imagine that the football authorities caved in to ‘pressure’ from the visitors having had to play in Cyprus on Thursday and also to BT who were the television company involved. Whatever the reasoning, the Blues in the crowd were more than ready to support Frank Lampard and the players as they went in search of a third straight victory.

Speaking on Friday, Super Frank encouraged his players to build on their recent good form saying, “We had to dig in and fight against teams like Manchester United and Chelsea to beat them last season – but can we approach games like Sunday’s with a different mentality and think about us and what we can do to compete with teams at this level?”

He expanded adding, “I think we’re in a different phase now. If we can get our performance right, we’ll have a good chance in this game. It’s important for us, when we’re on a good run, to focus on ourselves. If we keep doing things well, we should be able to give a lot of teams problems. We will be confident in what we can do. It would be a nice signal [to win the game] in the short-term, not so much to the outside but, to ourselves.”

Everton, with new signing James Tarkowski and Conor Coady in terrific form, boast the best defensive record in the Premier League, having conceded just seven goals in the top-flight so far this season. The manager duly enthused, “I’m very happy because it’s a base that can help you win games. I’m also happy for the lads, because when you work as a team collectively it’s a really nice stat to hold onto. What we have, for sure, is a great spirit and organisation. And we work hard on the training pitch, in trying to have that solid base. This Premier League is unforgiving, though, and if we drop those standards, then those nice things can change. We must take pride in that [the defensive record] and try to get even better, because we can certainly improve defensively.”

On squad availability, Lampard advised that both Yerry Mina and Mason Holgate had just returned to training and in respect of the game against Manchester United, Dominic Calvert-Lewin was in contention as was James Garner who he advised, “is now fully fit and pushing for a place in the starting line-up.”

Manchester United and new manager Erik ten Hag were massively second best in last weeks ‘derby’ with City, on the wrong end of a 6-3 scoreline that quite frankly flattered them – City could and should have had at least three of four more goals such was the chasm in quality between the two sides. United did respond in coming from behind to beat Cypriot powerhouse (?) Omonia Nicosia in Thursday’s Europa League clash in the eastern Mediterranean but, would find Everton at Goodison a much stiffer opponent.

Erik ten Hag has called on his Manchester United players to “play smart but nasty.” His actual wording reads, “I know nasty, I know what nasty is. I think also in that matter we can progress. Sometimes also play a little bit more smart.” The Dutch manager added “We have too many bookings and some in the start [of matches]. I heard in the Premier League they will play tough but I’m really wondering why we collect so many bookings. I don’t understand.”

And he might be right about needing to be smarter as in seven games this season, his side have accumulated 23 yellow cards – the second most in the league. Cynics would suggest that his use of the word nasty could be translated into ‘cheat more but, cheat better’ and could see more whining and play-acting from the likes of Bruno Fernandes.

In his Friday press gathering, when asked about team news he said, “It’s difficult to say. Raphael Varane makes progress, and I hope he’s available, but I think it will be close. From the other players, Harry Maguire isn’t available and then it’s Aaron Wan-Bissaka and Donny van de Beek, both not fit.” And that saw him name his starting line-up: De Gea, Dalot, Lindelof, Martinez, Shaw, Casemiro, Eriksen, Antony, Fernandes (c), Rashford and Martial.

With the floodlights blazing and rain falling, our referee was David Coote.

An early interception and break by Amadou Onana saw him feed Gordon who got forward but. Crossed too strongly to the back post and out for a throw-in. Excellent defending by Seamus Coleman thwarted the first United attack and it was a fine tackle by Onana on Casemiro that saw him find Gray and laid the ball perfectly into the path of Alex Iwobi to curl a delicious 20-yard, fifth minute opener wayyyy beyond the reach of the diving De Gea.

James Tarkowski with a good block on an Eriksen shot as the visitors tried to hit back quickly and Jordan Pickford easily held a cross from Casemiro as the Blues appeared happy to concede possession and look to counter-attack in the opening exchanges. Everton were looking calm and organised at the back before a midfield giveaway gy Gana Gueye allowed Martial to feed a ball through to Antony and the former Ajax forward coolly slotted the equaliser on the quarter hour mark.

Another poor ball from Gana Gueye was picked off by Eriksen and when Pickford parried his low curling effort, Coleman was only happy to send the ball behind for a corner that the Blues successfully defended. The visitors were now looking much the more confident and twice in quick succession, they carved their way through the Blues rearguard, Pickford denying Rashford at close quarters and Coleman doing enough to put Martial off even though Fernandes had been ruled offside.

Vitalii Mykolenko appeared to jar a knee but, quickly picked himself up to carry on without the need for attention from the medical staff. Dominic Calvert-Lewin started to warm-up on the touchline as Cristiano Ronaldo prepared to come on for Martial on 28 minutes as Dalot fouled Demarai Gray.

Everton had lost the early momentum and the Goodison faithful voiced some concern at misplaced passes, wanting to see their favourites re-establish themselves in the game. A block by Gordon saw the ball fall towards Maupay but, de Gea was lightning fast off his line to clear the momentary threat.

The electric atmosphere at the start of the game had disappeared and Everton were fortunate that a finish from Fernandez was ruled out for an earlier offside against Ronaldo… and with eight minutes still to go before the interval, Everton really needed to get a grip, they were allowing United far too much possession and time on the ball.

United were looking much more fluid and confident in possession and a nice passing move ended with Ronaldo scuffing his shot with Pickford saving easily. But, United came again with Rashford crossing from the left and Casemiro getting between Tarkowski and Mykolenko and incredibly, thankfully, putting his header from eight yards wide of the near post – another let off for the Blues for whom half time could not come quickly enough.

Unfortunately for Everton it did not come quickly enough as Casemiro won the ball off Iwobi and sent a ball through the left channel for Ronaldo to run onto and clinically beat Pickford low to his right with the 700th club goal of his stellar career. Two added minutes were announced and that gave just enough time for Gray to send a low cross into the area, de Gea gathering comfortably enough and the ref brought a half that had started so well to a very disappointing end.

Neither manager made any changes for the start of the second half and a 45 minutes that Everton would need to see a marked improvement in in their application. The early moments again saw the visitors looking more composed and comfortable on the ball to win an early corner that came to nothing. Onana was booked just over five minutes in for a clumsy challenge on Antony after he’d lost the ball. Ronaldo won another corner that saw Casemiro shoot well wide of the target from distance but, Everton failed to create when in possession, Shaw twice winning the ball back and thwarting early attempts by the Blues to get forward.

A foul by Dalot on Gray gave the Blues a free kick that Gray sent too long to the back post, the next Everton raid saw Gray cross just too high for Maupay. Onana crossed from the left for Iwobi to head down, Eriksen hooking the ball clear as Everton enjoyed a small period of decent possession.

Reaching the hour mark, Everton still weren’t doing enough to seriously threaten the United defence, a cross from the left by Mykolenko finding Iwobi and his quick ball into the box going behind off Coleman. Frustration reared its ugly head as Anthony Gordon fouled Fernandes and his fifth booking means he’ll miss the trip to Tottenham on a one-game suspension. Another cross from Mykolenko found Gordon but he didn’t get a good enough contact and United countered at speed with Seamus Coleman getting back to concede a corner and prevent a cross from reaching Ronaldo.

Frank Lampard made his first change on 67 minutes withdrawing the yellow carded Gordon for Dwight McNeil.

Amadou Onana won a left wing corner and raised the voices of the home crowd, the Belgian himself getting on the end of the set piece from Gray but unable to direct his header on target. Into the final twenty minutes and the Blues really needed to dig deep to find something to hurt the visitors but, it was back to defending as Rashford, Fernandes and Eriksen exchanged quick passes, Coady thumping the ball out for a throw-in.

Another United break ended with Eriksen firing high and wide, and finally Dominic Calvert-Lewin prepared to come on to hopefully boost the Blues attacking initiatives. It was a double change on 75 minutes as James Garner replaced Seamus Coleman and Gana Gueye made way for the return from injury of Dominic Calvert-Lewin.

United thought they’d wrapped up the points on 80 minutes as a long ball from de Gea was headed on and Rashford escaped the attention of James Tarkowski to beat Pickford but, a slight touch of ball to hand saw the goal chalked off.

Another change on 84 minutes saw Salomon Rondon replace Neal Maupay ahead of McTominay being booked for his first tackle on Gray.

Iwobi and Gray both saw crosses headed clear as time began to work against the Blues. Lindelof again cleared an Iwobi cross and de Gea easily gathered another cross from McNeil as the Blues attacked without any real conviction. Gray from the elf found the head of Onana but, again he couldn’t direct his header on target.

Four added minutes were announced, could Everton find an equaliser they probably didn’t deserve, but de Gea with a vital save prevented Onana getting on the end of a cross from Garner. A late corner saw substitute Varane prevent Jordan Pickford from getting to it. Two more corners as Everton threw everything forward but, sadly it was in vain and if we’re honest and much as it pains me to say it, United deserved the points.