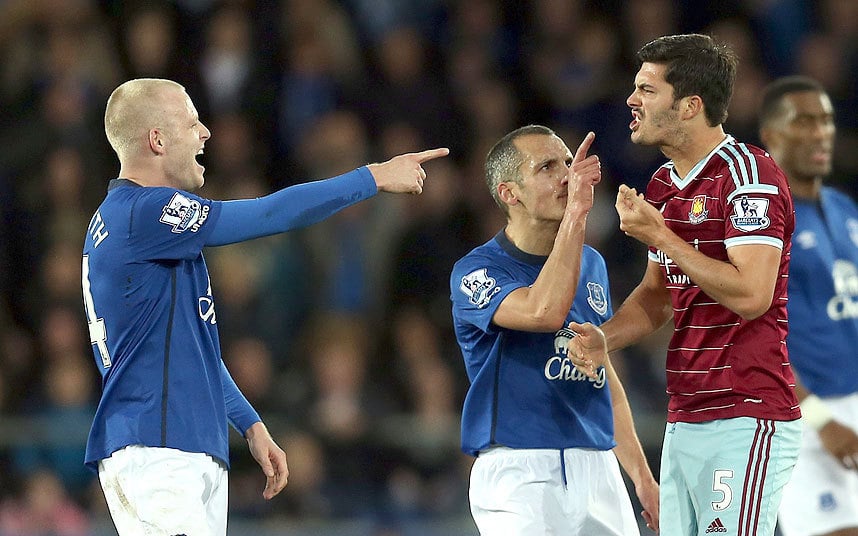 The nights start to draw in. The sun lowers in the sky, diffusing everything that its light touches. A chilled breeze you’d forgot reintroduces itself after a very welcome absence. Only the hardy fail to bring a jacket. The pints feel a little less refreshing but somehow more necessary. And Everton really need three fucking points to get their season going.

A fifteen day break from the last game was likely good for resting legs and working some training ground stuff as it was bad for any momentum, although personally I couldn’t see anything good coming from that away game at Arsenal. A home tie against a West Ham team on the same points as their hosts seems much more palatable for an Everton searching for that first league win of the campaign.

It’s also given me more time to appraise the Merseyside derby draw and – all things considered – I was quite pleased with a point, even if subsequent performances and results from Big Red makes me think that a little more murder instinct from Everton may have yielded a better result. They did hit the woodwork a few times so – coupled with some quite super saves from our keeper –  it’s probably a fair result.

An in form keeper who’s now out for a month, obviously.

Premier League football is a cold hard results game and there’s a certainly a case for rather being lucky than being good. I always think you get a sense, a feel, for any tangible progress from your team and to many of us it looks like there’s something better than last season brewing at Everton. This could now go horribly wrong such is the trapeze act Everton plays with our emotions, but at least it seems the prioritising of character in recruitment this summer has yielded something you’re not anticipating an implosion from at the first sign of adversity. Having two systems of playing with the personnel enabling this is also a novel phenomenon, most agreeing that the 4-3-3 avenue is the one to try out now. Ultimately though Everton need a win, in fact Everton need back to back wins to hopefully kickstart some confidence and momentum in the squad to take them away from the anxious zone before the World Cup interrupts proceedings.

A first step towards that is Sunday’s visit of West Ham United. The Londoners will also be earmarking this as a game to boost their own season so one may imagine a strategic battle of attrition to not lose, rather than a gung ho game of togger Pong. More so when you consider West Ham’s familiar current manager who has all the risk taking instinct as a time served civil servant. I guess there’ll be some pantomime discontent aimed at Moyes, largely merited from that big shit eating grin running up steps to become Man United manager, while still Everton manager, and some trite comments trying to buy Baines & Fellaini on Aldi price points shortly after. As much as I celebrate Evertonian appetite for pettiness I think most will be appreciative of his eleven years service and the good – and a couple of sort of great – times he brought to the club.

And fuck I yearn for just good times again, going the game and anticipating a team that knows its roles, that work hard and be smattered with some players of genuine finesse. Sure a glass ceiling might have got in the way but on the budgets Moyes worked he produced a succession of really enjoyable Everton teams to embellish most of our weekends. With the heavy irony that the wealth craved to turn it into something tangible came not long after Moyes left, and it made us so much worse. A little hubris perhaps, for both parties. After a long period of ill fated roles the granite-faced-cardigan-molesting-pack-the-midfield-sorcerer has found a kindred club in West Ham and I can’t deny him any feelings of relief he may be experiencing. Seems he’s got a few years before their fans uproot him out of what they think is ambition, but is likely to just be over familiarity.

I’ve no real sweat with West Ham as far as oppositions go in this godforsaken cringe flooded jakey league we have to participate in. They’re a fine working class parochial club and suffered sufficient woe to temper any misplaced bravado. There was a slight online tiff a few years ago with James McCarthy scissor tackling their best player at the time but that thankfully seems behind us now. That whole thing did reveal something I wasn’t aware of, a huge behavioural divide between old and young West Ham fans, but like I said I’m just glad we could put it behind us.

The thing that shocked me about the younger West Ham fans was how utterly nondescript copy and paste lad bible stroking bad bad texans they were, it really took me by surprise. Just seemed something like the world’’s biggest failure in parenting, as previously sound West Ham fans with a tremendous pie and mash shop adoring their ground, managed to rear a hive of over reactive witless jarg Geordies. Had I missed something happening in the East End of London during the nurturing of their offspring that prohibited it’s success on such a grand scale? It was like every single one of them, WestHamLoyal or HammerHarryLol123 turned out to be peculiar little try hards. Yet I can’t hold it against them as their parents were just generally decent and sound fans, so no point continuing down that path really. I for one am pleased they’ve managed a run of seasons without being relegated, as there’s some great fans amongst them there.

You’d be gutted though wouldn’t you? A historic and deep rooted club you real felt affinity to. Only to hand that down to your kids and they set it on fire in front of you, in preference to act like every other dead-behind-the-eyes-void-of-charisma fan in the league. In it for the lols. Cheap acts of bravado designed to incite rather than just getting behind your team. Imagine being that needy? Imagine seeking validation from others as you’re so uncertain and unsure about the club you take your whole self worth and identity from? I can sense ten thousand chimney sweeps rolling in their grave at it all. I’d like to paraphrase those hard working men of the soot if you permit me, I guess they’d be saying “I know we’re really proud of our country lads but we’ve never ever been champions of it and even in our highest ever finish of third place Everton still finished above us” and it’s hope that their millennials listen to those wise words. A good club and one that is a stalwart of English football, contributing hugely to the country’s finest ever moment in international competition with a few players. Even if they played every game on home soil and needed a hugely controversial refereeing decision to get it over the line in the final, I think we can all appreciate the magnitude of what they achieved.

I don’t pay too much attention to other’s teams but it’s safe to assume Moyes will have recruited pragmatically with strength throughout the team and a coherent way of playing. It’s effective, it will be organised and street smart, but Lampard and Everton will know exactly what they’re up against. I hope the Goodison atmosphere is absolutely vile antagonises every single one of them, none more so than Moyes. Unless he and his players are surrounding the ref at full time then I don’t know want to know. It’s not enough to win, it’s necessary to shithouse when doing it. Then I want hailstones when their fans are leaving and ok our fans will be leaving too but we just didn’t get beat so the hailstones will not arse us as much. Get that M6 closed between whatever junctions you fancy too for their ride home. Who the fuck are they to come to our place and try deny us points? Apart from that, it’s true, I am quite fond of them. Hence why I didn’t wish for a passing asteroid to hurtle into their athletics stadium nor did I wish scurvy on any of them, as they’re just good fans with a sound sense of self deprecating humour really. And who doesn’t like that?

Fairly safe to assume Lampard will go with the 4-3-3 that’s looked fair in the past few games. I’m guessing that means Maupay up front with a fortnight’s sharpness under his belt, as it would foolish to bring DCL back anything but gently. Give him 15 at the end though. It’s likely to be Gordon and Gray either side of him, with heavy emphasis on them delivering goals as part of a forward three unit.

The middle trio you wanna see right now is Gana, Onana and Iwobi. Sure Davies has been playing alright and Doucoure & Garner are yet to come, but those three look like they have a little something of most elements you like to see in midfield. Maybe the mix or their form might not work but there be only one way to find out. After multiple versions of the flat footed midfield shithouses we’ve endured over the last few years it is just pleasant to think maybe there’ll be some verse, edge, invention and legs about a bit more, for weekend pleasures. Iwobi has been transformed under Lampard and sustained that beyond it being just a blip, I’m really made up for him. Quite how he ended up as an around number 8 hunter sexer I don’t know. Your man Onana looks like a someone’s breeded a gazelle with an At-At and it just wants to attack hostile planets, but in a silky way. I hope Gana returns with the energy and annoyance he had before. Anyway they have a decent test here against a Moyes midfield and one containing Declan Rice, who’s a really tremendous baller really.

You can probably guess the defence and I’ve been a bit too complimentary above for a side still without a win after six games so I’m gonna tone it back a bit until they earn it. Natto Patto though is absolutely fucking filthy. Oh and Pickford being injured means we got Begovic for this. Not jinxing anything here dear reader, so let’s rush to a close.

Potential is nice but it’s just that, potential. When your expectations and optimism have been crushed so much you may tend to over enthuse over little green shoots that seldom develop in plants, never mind trees. Everton really fucking need those wins right now and this fixture is as good any we got coming up to try make that happen. The test of character we see on the pitch is showing promise of converting defeats into draws, but is now needed to upgrade draws into wins. However they manage it, but hopefully without the need of passing asteroids or any harm to anyone, satirical or not.

Nearly made the preview without talking about a proposed remembrance as truth be told I’m not that arsed. So it’s no sweat for me to not be arsed for a minute or so while some who are arsed pay their respects or take some comfort in it. Can anyone be arsed the tedious pantomime many in the media may want it to be? You choose your flavour though, I’m just here for the footy.