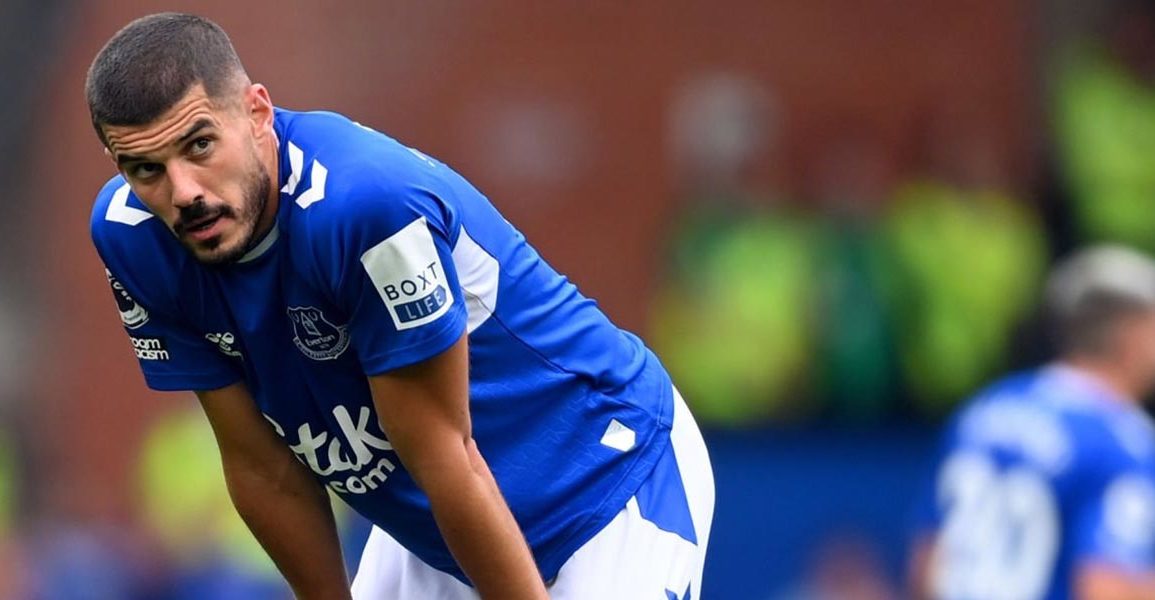 VAR decides a thriller ends even.​

Everton were denied victory in this the 241st derby as VAR ruled out a short range finish by Conor Coady for offside. Arguably the most competitive derby at Goodison for years saw Everton give as good as they got and fully deserve their point that could so easily have been three.

Derby Day on Merseyside is always a special occasion, not for the faint-hearted neutral and a day when partisan rivalries often overshadow the quality of the game itself, such is the importance of the result to both sets of supporters.

Everton had a busy summer of transfer window business and some of the fruits of the wheelin’ ‘n dealin’ were expected to play major roles in this match-up with them from across the park. And manager Frank Lampard quickly turned his attention to the game saying, “It’s time to get to work and get results. I understand what this game means as I was fortunate to take part in a lot of London derbies. But, when you’re talking about a city like this, it’s so 50/50 and it ramps up the intensity. It’s my first Merseyside derby at Goodison and I’m excited about that. We’ll have the home crowd behind us before and during the game, we have to perform with the same passion they’re going to turn up with.”

With potential debuts for Neal Maupay, James Garner and a return for firm fan favourite Idrissa Gana Gueye, Lampard spoke of his two midfield additions saying, “Gana Gueye gives me a great option and great experience. He’s a different profile of player to what we’ve got, so I’m really, really pleased. He’s a player for the now, with James Garner he’s a young player with lots of energy and quality. He’ll improve with us and improve us.”

On a four game unbeaten run, Frank Lampard was keen to get a first win of the season and who better to get it against than Them. He entrusted the task to his starting eleven of: Pickford (c), Patterson, Coady, Tarkowski, Mykolenko, Davies, Onana, Iwobi, Gray, Gordon and Maupay.

The visitors have had an indifferent start with two draws, two wins and a defeat at Manchester United in their opening five games but, needed the ‘help’ of at least three extra added-on time minutes to eventually overcome Newcastle in midweek.

Having lost Sadie Mane in the summer, they’ve only added three players during the summer in striker Carvalho from Fulham, Nunez and loanee Arthur Melo from Juventus. And they crossed the park with a number of early season injury concerns as well as two potential returnees for manager Klopp to muse over.

Klopp advised his Friday media gathering of the expected absence of Keith, Thiago and Oxlade-Chamberlain and when asked about his captain said, “Henderson is definitely out, injured but, I don’t know the extent. Jota probably will be in, he trained yesterday and will train again today. I have a decision to make, to involve him already or not. It’s the first time we have five attackers, sounds like Christmas.”

Summer signing Darwin Nunez is eligible again having served his first three match suspension after being sent off in a draw with Crystal Palace and Klopp noted, “he’s is really good shape, and after winning the last two games, we don’t see his suspension as a bad thing. He looks really settled now, he had a really good week.”

Our referee for this lunchtime clash was Anthony Taylor.

The visitors won the first corner and the Blues defended it and Salah on a run was halted by Tarkowski as they looked to establish an early dominance on the game. The Blues first foray forward saw Iwobi release Maupay and he played in the overlapping Onana but, his shot from a narrow angle didn’t trouble Alisson.

Coady spread a ball wide right for Gray and his cross into the area was begging for a centre forward to get on the end of it. Davies dispossessed Fabinho to get the Blues forward again, Maupay seeing his shot go wide of the far post. A minutes applause on nine minutes rang around Goodison in tribute to Olivia Pratt-Korbel, so tragically killed in her own home by some as yet to be caught scumbag.

Patterson and Diaz were spoken to after clashing, inevitably the free kick went their way, and through the opening quarter of an hour, the game was fairly even. A good run by Gray was halted but, the RS counter attack fizzled out aimlessly. A cross from the right by Alexander-Arnold saw Nunez head wide before quick passes from Iwobi and Davies saw Gray cross low into the area but, not find a Blue shirt.

Tsimikas scythed down Gray receiving a ball from Iwobi and escaped a yellow card, the free kick leading to the Blues first corner. The ball was partially cleared to Gordon who struck a firm shot that Alisson went low to his left to gather. Tsimikas with another foul into the back of Gordon ahead of Gray getting a ticking off for diving over the leg of Gomez.

Gordon was then lectured after protesting a free kick against him and Tsimikas rolled around after a bump from Gordon as the temper temperature began to rise markedly. Iwobi to Mykolenko and on to Gordon saw him cross from the left flank but, too strong for Gray. Great pressure from the Blues pinned the RS back and Tom Davies was unlucky to see a deft, outside of the boot, short range shot beat Alisson only to come back off the post.

Everton were hounding the RS in midfield not allowing them to settle on the ball, maki g them turn and recycle time and time again. Onana was booked after an accidental collision with Carvalho who stayed down for a lengthy period of treatment. The Belgian headed the free kick out as far as Salah who crossed to the back post where Nunez again failed to trouble Jordan Pickford.

Into the final five minutes of the half and a long ball from Gomez saw Nunez shot and Pickford tip it onto the crossbar, Diaz collecting the rebound and jinking into the area and see his shot come back off the far post. Coady headed a Tsimikas cross behind for a corner as the RS pressed forward again, the Blues defending well and breaking through Gray and Gordon.

Two added minutes were announced that saw no more meaningful action and a competitive half ended scoreless.

A change for the RS for second half saw Firmino replace Carvalho. Good work by Coady saw him clear after Tsimikas had gotten away from Patterson who made up for it with a clearance to deny Nunez, the RS attack coming to nothing as Tsimikas blazed a shot high and wide.

The Blues got forward as Gray on the right found Iwobi, his quick lofted ball into the box saw Maupay lift an overhead kick over the bar. Gomez got away with a clear foul on Maupay and the RS won a corner that Tarkowski cleared easily. A bit of a lucky escape for the Blues as a Salah cross was only partially cleared by Coady and the first time shot from Nunez went straight at Pickford.

Everton defended another corner well but, the RS were enjoying too much possession in the early stages of the second half. Determination from Iwobi took him away from Fabinho and try a speculative shot that went wide. Tarkowski showed no nonsense defence as he bundled Diaz to the ground before a loose ball from Patterson gave away a needless corner that they wasted.

Robertson and Milner replaced Alexander-Arnold and Tsimikas on 58 minutes, Klopp maybe thinking he didn’t need fullbacks to cope with the Blues offensive efforts, only for Gordon to get wide and force van Dijk into conceding a corner, that was played far too long.

Just passed the hour mark, Idrissa Gana Gueye received a rapturous welcome as he replaced Tom Davies. The Blues, roared on, attacked following some lovely footwork from Iwobi, Patterson bursting forward to see his shot deflected behind for a corner that was defended. The RS broke and Pickford pushed a Firmino effort round the post and then denied the Brazilian on a header and a Fabinho shot.

It was now end to end as a lightning fast break by Gray set up Maupay and Alisson pushed his shot away for a corner that failed to produce. An incredible decision gave them another corner as a tackle by Onana on Robertson clearly went behind off the Scot. Everton defended and broke quickly to win a corner and it led to Maupay crashing a low ball across the face of goal for Conor Coady to bury from about six inches. Needless to say it was reviewed by VAR in favour of the RS and offside awarded.

Goodison was a bear pit now as Everton were aggrieved and we passed 75 minutes with the game on the proverbial knife edge. Van Dijk was booked for a nasty challenge on Onana that saw the Belgian need treatment. The free kick eventually seeking another corner for the Blues that failed to produce.

The RS made two more changes as Jota and Matic replaced Nunez and Elliott for the final ten minutes of normal time and Gawd knows how much added-on time.

Dwight McNeil was the Blues second change shortly afterwards replacing Anthony Gordon, and the former Burnley man won a corner as Alisson tipped his deflected shot over the bar. The RS cleared their lines and their attack fizzled out as Diaz could Gana Gueye.

Six added minutes were announced as Fabinho again got away with an off the ball foul on Gana Gueye as Everton broke and Gray tested Alisson from the edge of the area. Robertson on a charge sent a ball to the back post where Salah saw his shot come back off the post and a follow up effort go wide. Pickford was yellow carded for time wasting

A fantastic effort by the Blues with many candidates for Man of the Match, so much so that just this once, we’ll allow two votes with The Whole Team included.

NOT EVEN ARSED ANIMALS