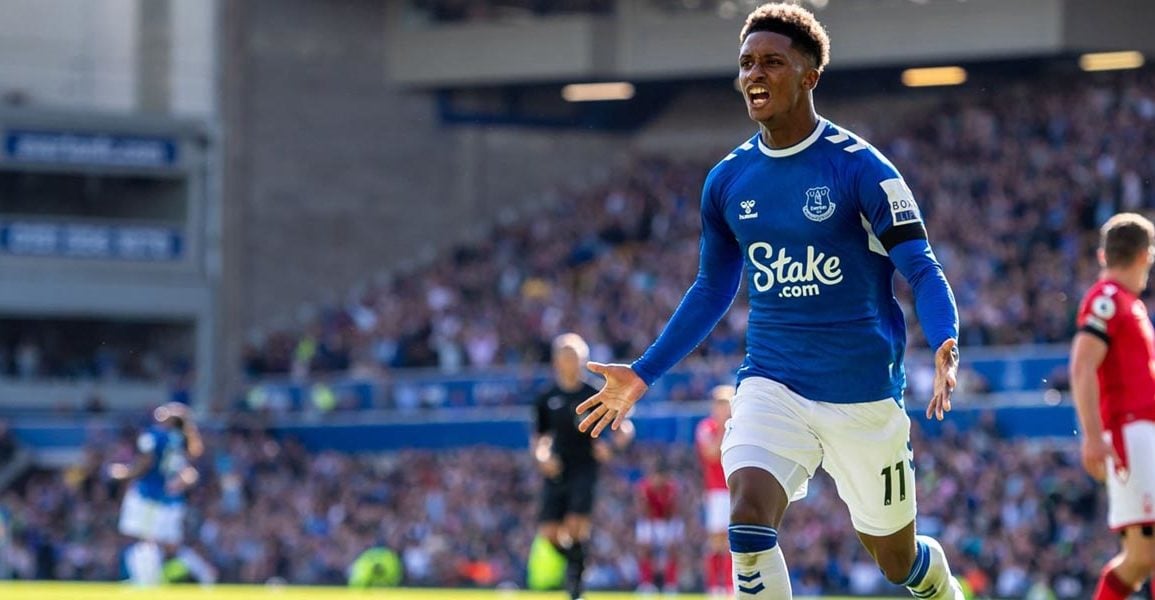 Everton had to dig deep to rescue their first point of the season as Demarai Gray’s late strike cancelled out the Johnson opener for Forest in what became a frenetic final ten minutes.

Game Three of the new season pitched newly promoted Forest as the visitors as Everton sought to get their season underway after losses to both Chelsea and Aston Villa, with the visitors three points better off having beaten West Ham last weekend.

Everton needed to find some progressive midfield play and a genuine goal threat having looked rather blunt up front without the injured Dominic Calvert-Lewin and with Salomon Rondon having only come on as a second half substitute at Villa Park. And most of the past week has seen the Blues linked with any number of alleged transfer targets but, as time ticks by inexorably in this summer transfer window, any targets remain alleged or rumoured… nothing definite has been concluded.

And it hasn’t only been rumours of alleged arrivals, there’s been growing speculation over the future of Anthony Gordon with Chelsea seemingly having had two substantial bids rejected by Everton, while there’s still talk in the media of a deal between the clubs that suggests one or more Chelsea squad players could swop places with Gordon heading for Stamford Bridge. Watch this space.

And asked specifically about the Gordon speculation in his Friday press gathering, Frank Lampard was quite curt with his response saying, “He’s an Everton player. I don’t want to answer hypothetical questions. Firstly, he’s got huge value to the team for me. We saw that in his progress last season and felt that on the pitch. He’s a massive player in the squad. He’s a huge, valuable asset for the Club, one we have actually developed ourselves, so there is a link to the fans and a link to the Club. He is in the squad for tomorrow [against Forest]. Any chats I’ve had with him will remain private. He is our player, it’s as simple as that.”

One player who appears certain to be leaving Everton before the transfer window closes is Dele Alli, the former Spurs player reportedly having agreed terms to join Besiktas in Turkey on loan, although he was destined for a place on the bench when the teams were confirmed at two o’clock.

Lampard was keeping his cards close to his chest when asked if Amadou Onana would be a full Goodison debut against Forest when he said of the Belgian, “He’s settled in very quickly, he’s a very good teammate. He’s a real big presence. He gives off a very good energy every day in training with his voice, for a young player. He’s a smart boy. I think he’s going to be a big player for us, but we have to be patient.”

Forest have been arguably the busiest in the summer with no fewer than 16 signings as the club who twice lifted the European Cup under the management of the inimitable Brian Clough, look to get a foothold in the Premier League under the current leadership of Steve Cooper.

With a host of new players including latest signing Morgan Gibbs-White from Wolves together with Emmanuel Dennis, Chiekhou Kouyate and the experienced Jesse Lingard to name just three, this seasons Forest bears little resemblance to the side that saw them gain promotion.

Speaking to the media Cooper expressed his pleasure at the positive week his club have enjoyed since securing their first points against West Ham. “We were pleased to get off the mark at home last weekend, and there were a lot of good things to come from the game. The feeling for the supporters after that first win was the most important thing, something we talked about in the build-up.”

Looking to try and earn their first points on the road this season, he added, “We’ve had a good week of preparation and with no midweek game we’ve been able to spend a lot of time out on the training pitch together and that’s important for building our team spirit. Everton away will be a tough fixture but, one we will commit to. We try and think only about ourselves, while respecting the opponents but, we have to focus on our ideas as we want to win every game we play in.”

In charge of what could be a vital fixture on a breezy afternoon, our referee was Andre Marriner.

Anthony Gordon drew an early free kick from Worrall and Demarai Gray swung it to the back post where Tom Davies just couldn’t reach as the Forest back line stepped up. A nice move involving Gray, Iwobi and Gordon saw the latter win the Blues first corner that came to nothing.

A foul by Gordon on O’Brien gave Forest the chance to lift a ball into the Everton area but, it was over hit and sailed harmlessly into touch. A good challenge by Patterson won the ball for Gordon who advanced to play in Davies for a shot that went wide across the face of goal but, it had been a bright opening ten minutes from the Blues.

Iwobi to Gordon whose shot from the edge of the area drew an acrobatic flying save to his right from Henderson and the Forest keeper then went down to his left to deny Iwobi as Everton came again. Forest took to slowing the play down with multiple passes across their back three before eventually getting forward and Williams forcing Pickford into his first save of the game.

Worrall was booked for pulling back on Gray and again his deep free kick to the back post found Davies, his first touch not quite good enough to force Henderson into a save. When Forest next got forward, Awoniyi saw his weak effort saved by Pickford.

Forest were coming more into the game as we passed the halfway point of the first half and having weathered the early Everton assaults on their goal. Mykolenko was brought down on the left hand side of the Forest area, Gray with his third free kick fired it low to the near post where Henderson blocked it and it was hastily shovelled behind for a corner that was cleared back to Gray who then fired over the bar from the corner of the area.

A poor ball from Tarkowski was picked off giving Forest a chance that eventually fell to Mangala, Jordan Pickford more than equal to the task of saving his weak shot. Great tracking back by Alex Iwobi saw him draw a free kick for a foul by .Johnson who’d escaped the attention of both Mykolenko and Tarkowski. Everton countered to win another left wing corner that Tarkowski failed to get a good contact on with his attempted header and Forest cleared.

Gray wasted another free kick opportunity after O’Brien again fouled Gordon before a surging run from halfway by Gray saw him thread a ball through for Gordon with Henderson very quickly off his line to deny him a shooting chance. Five minutes left in the first half, could Everton find a goal that their overall play deserved ?

As it was, Forest forced their first corner, Williams only finding the head of Tarkowski and his second cross punched clear by Pickford. A low ball into the area from Toffolo was cleared by Coady before Gordon began an attack that ran out of steam and as one added minute was signalled, Gray sent a twenty yard shot over the bar much to his frustration.

Neither manager made any changes for the second half as Everton kicked off and went straight on the attack with Davies leading the charge and eventually seeing a shot blocked, and Lingard overhit a through ball for Awoniyi as Forest countered.

A shocking ball from Gray for Patterson saw another attack break down but, good work from Mason Holgate earned a free kick on the right that Gray took and Henderson claimed comfortably. Iwobi forced a turnover but played a disappointing pass before winning the ball back, finding Davies who found Rondon for shot on the turn that went just inches wide.

Mangala went down off the ball on 54 minutes and after treatment was replaced by Yates. A right flank burst by Gray saw him cross just too far in front of Rondon as Everton prepared a double change. On 57 minutes, Amadou Onana replaced Tom Davies and Dwight McNeil replaced Salomon Rondon.

Onana was yellow carded inside three minutes after losing possession and attempting rugby tackle a Forest player. Gibbs-White replaced Awoniyi just before the hour mark and Everton won a free kick on the left after Worrall brought down Gray. The set piece was played low to the near post and Forest scrambled it clear.

Onana with another foul, on O’Brien, had Forest players asking the ref for a second yellow, he ignored them thankfully and Williams sent the free kick high and wide. Gray got away from Worrall and Williams to set up Onana for a long range effort that went too high and narrowly wide.

Tarkowski sent McNeil free on the left, his low ball towards Gray being hacked clear ahead of another good run by Gordon winning a corner on the left, Henderson getting the slightest of punches to it before going down and causing a stoppage in play, and an impromptu drinks break for all the players.

Gordon with a neat turn and shot saw Henderson push his shot behind for a corner that Gray completely wasted – he really does need to work on his dead ball delivery.

A little over a quarter of an hour to play and this was looking like a stalemate as Yates shot was deflected wide for a Forest corner before Gibbs-White beat Gordon to cross dangerously and Williams fire a full-blooded shot wide across the face of goal. Iwobi to Gray who eventually found Patterson to set up Gordon for a shot that Henderson saved comfortably before O’Brien fired hopelessly high and wide as both teams strove for a late winner.

Ten minutes to play and again, another poor ball this time by McNeil failed to play Gordon into space… and Sods Law struck as Pickford could only parry a blast from Yates and Johnson pounced to slide the rebound beyond Pickford and inside the far post.

Kouyate replaced Lingard on 83 minutes ahead of a lunge by Williams that caught Onana on the ankle. Gray with another free kick that was far, far too easily cleared and when the ball came back into the Forest area, Gray, Gordon and Holgate all failed to find the net as the ball pinballed around before being hacked to safety by the visitors.

With the Forest fans singing, “you’re getting sacked in the morning” in the direction of Frank Lampard, some home fans began to drift away and missed the 88th minute equaliser as a long ball out of defence found Demarai Gray in space and he stay cool, calm and collected to beat the oncoming Henderson and send Goodison into long overdue celebration.

Yates arriving into the Everton area lifted a shot from twelve yards over the bar and Everton got forward to win a corner as four added minutes were announced, Gray again only finding the gloves of Henderson. The Forest goalie then beat away a shot from Gordon.

Alex Iwobi nearly capped another good showing as he curled a shot just over the crossbar and a slip by Worrall let Gordon in, Henderson again ultra quick off his line to charge down the attempted chip shot.