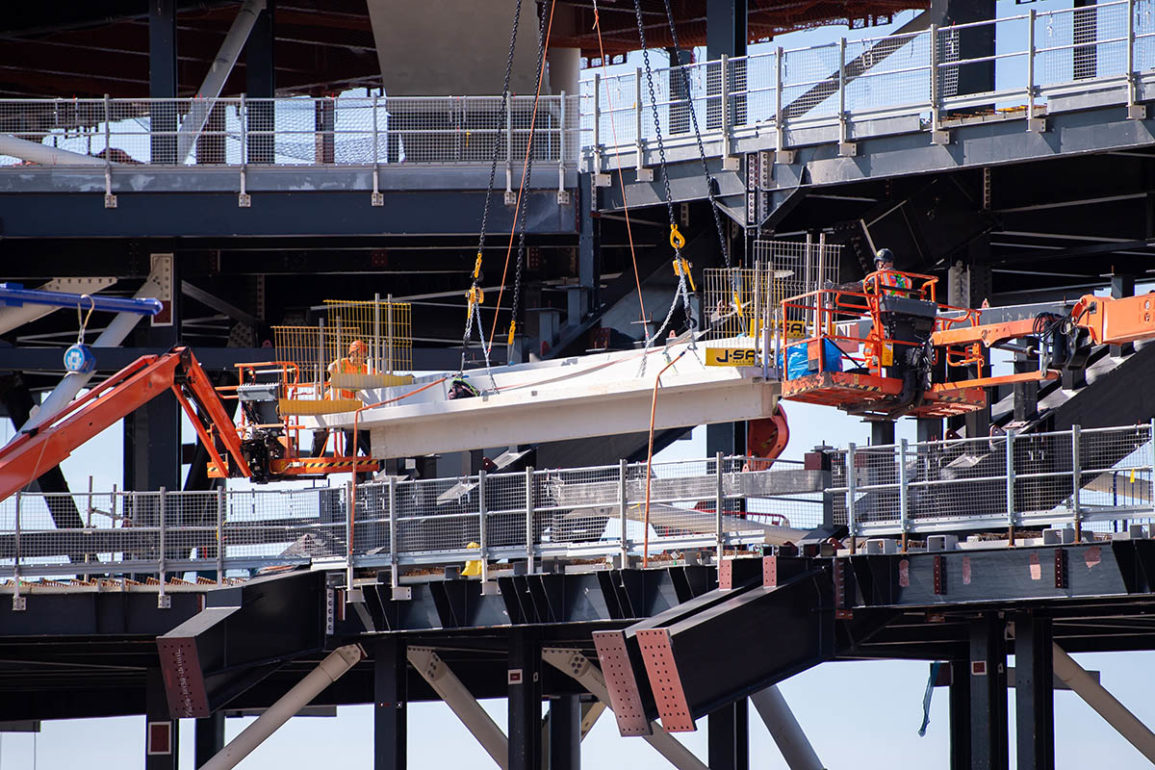 The first concrete terracing unit has been installed at Bramley-Moore Dock – one year after work began on site.

And as the Club celebrates the first anniversary of the build, contract partner Laing O’Rourke have confirmed that work is complete on building the four concrete cores to their full height.

The double milestone was achieved 12 months to the day since a project commencement ceremony took place at Bramley-Moore Dock to mark the breaking of ground in the construction of the £500m stadium, attended by Everton Chairman Bill Kenwright, Chief Executive Denise Barrett-Baxendale and former Players’ Life President Graeme Sharp, alongside some of the project’s key planning, construction and engineering partners.

The first of 1,217 terracing units, which will form the internal bowl lining, was lifted and bolted into place in the lower tier of the north stand on Wednesday by workers from Laing O’Rourke.

The bespoke, double-stepped terracing units are manufactured in Ireland by Laing O’Rourke’s supply chain partner, Banagher, and delivered by boat to Liverpool docks, a short distance from the project site.

“As the terracing installation progresses in a logical sequence, the structure looks more like a football stadium with every day that passes.”

The ‘topping off’ of the four concrete cores means they are now complete units, ready to support secondary steelwork and, ultimately, the roof trusses.

Meanwhile, work continues across all four stands at Everton Stadium, with the two steelwork sections on the north stand edging closer to connecting.

The first precast concrete walls that will make up the first floor have been installed in the east stand, with the entire first floor close to completion in the opposite west stand.

Everton Stadium, due for completion in the 2024/25 season, is recognised as the largest single-site private sector development in the country, contributing an estimated £1.3bn to the UK economy, creating thousands of jobs and attracting 1.4m visitors to the city of Liverpool, annually.

Once complete, the scheme will have acted as a catalyst for more than £650m worth of accelerated regeneration directly benefiting the nearby Ten Streets development.