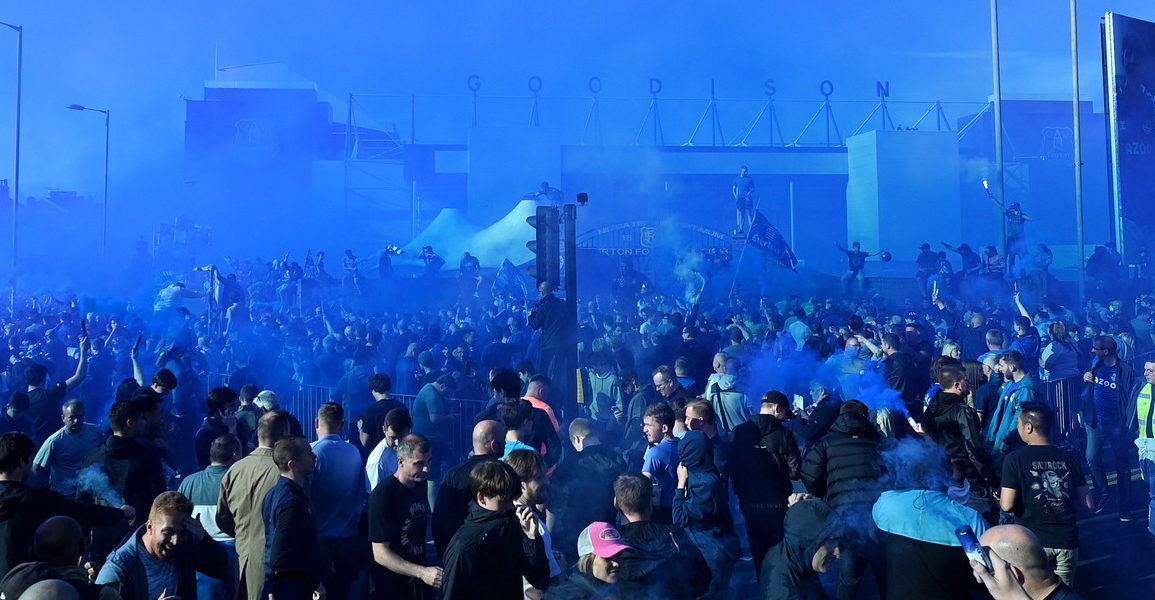 Spirit of the Blues

We marched down the Goodison Road; we stood side by side as we sung along together and – as one banner at the recent fan protest pointed out – ‘It took the Spirit of the Blues to keep us in the Premier League.’

In truth it still feels like that night against Palace and that second half is still in the rear-view mirror, the dust has barely settled and that atmosphere’s still reverberating around Goodison Park, yet here we are the new season imminently upon us.

Despite the pain and anguish the last campaign inflicted on us Evertonians in our strange and sadistic sort of way we all have yearning to be back – a desire to be back amongst friends, to feel the goosebumps when Z-Cars kicks in and the unbridled euphoric joy when the ball hits the back of the net. It is the hope – not necessarily the expectation – that draws you back in. It is as if the summer resets our mind and numbs the painful suffering being an Evertonian can bring but at times like this hope and (very slight) optimism is all we can carry on our long and arduous pilgrimage to Goodison and beyond.

Somewhere around mid-April there felt like a complete change in mindset; we’d endured a hefty defeat to Crystal Palace at Selhurst Park in the FA Cup – that one hurt, not just the fact we had been thumped by Palace after being 90 minutes from a trip to Wembley but the ludicrous lunch time kick off meant a 3.30am alarm and a coach journey to the capital that commenced at 5am; the things you do for Everton, eh. By this point in the season, we had been to Burnley and lost but it felt more than a loss, it felt like a huge nail in the coffin as the trap door to the Championship loomed, yet three days later we took three huge points at home to Manchester United and then the spirit of the blues kicked in, the mentality and passion that drove Everton over the line to safety. When the idea of a coach greeting around Goodison was first mooted it wasn’t particularly well received but this was to be the catalyst for Premier League survival.

As iconic as this song has become, however, the future for Everton and Lampard has to be bigger and brighter than second half come backs to ensure Premier League football. We’re about to embark on another campaign and while there is clearly trepidation from fans after what we had to endure last season – throw in the enforced sale of Richarlison to Spurs – and you can understand why there is some fear and anxiety of what the season could bring but last season simply cannot be repeated.

There’s no doubting losing Richarlison is a huge blow, last season in particular he became Everton’s talisman; often dividing opinion inside and outside the club but his desire and commitment can never be question. This club was rapidly sinking last season and when we desperately needed someone to step up Richarlison delivered – he wasn’t alone, Pickford made some word class saves and Iwobi’s last gasp goal against Newcastle was huge – but there was consistency in Richarlison and his goals won vital points, not least the one he slotted at home to Chelsea in the 1-0 win. Personally, the sale leaves a bitter taste especially given the fact it was self-enforced through years of overspend; something had to give and at the books have to be balanced, money has been spent but not much has been received – how do you sell the deadwood we’ve accumulated over the years. Richarlison felt like Everton and his time here will be remembered many things – his social media exploits, throwing flares into the crowd and his iconic pigeon celebration but mostly he will be remembered for scoring some of the most important goals for this club in many many years.

So, it’s over to Lampard and Thelwell to ensure that old footballing adage ‘Are we better at the end of the window than the start?’ is answered in the affirmative; although the summer signings have begun to trickle through the Finch Farm reinforcements are still needed as is the odd piece of deadwood out of the door too. It’s a big season ahead for Lampard, the current favourite with many of the bookies to be the first manager sacked, to prove his coaching credentials. Lampard still has his detractors within the media – not least with the short-sighted view that he simply took Everton from 16th to 16th, as Simon Jordan loves to throw out, but it was much more than that; at the time of the appointment the relationship between the fans and the club had never been so fractured, it literally was at boiling point, the Benitez decision still left a sour taste and protests begun to emerge. It was on the brink. It’s not all been a bed of roses, however, some of the early defeats led to understandable questions about tactics and set ups – especially the 5-0 drubbing by Spurs – but things changed and changed for the better as Lampard picked up some eye catching and impressive results not least the wins at home to United and Chelsea but a huge away win at Leicester before the incredible second half come back again Palace; sometimes football is just unfathomable.

And finally, there’s us – the fans – hopefully the penny dropped last season when the negativity dropped, and the support turned so did results and performances. The fans can make a huge difference, we’ve all the old cliché about the fans being the twelfth man but it really is accurate. It is huge. We know this season will be tough and there will be times that the fans will have to drag them over line with that atmosphere – let’s keep the spirit of the blues going!

UP THE F*CKIN’ TOFFEES!