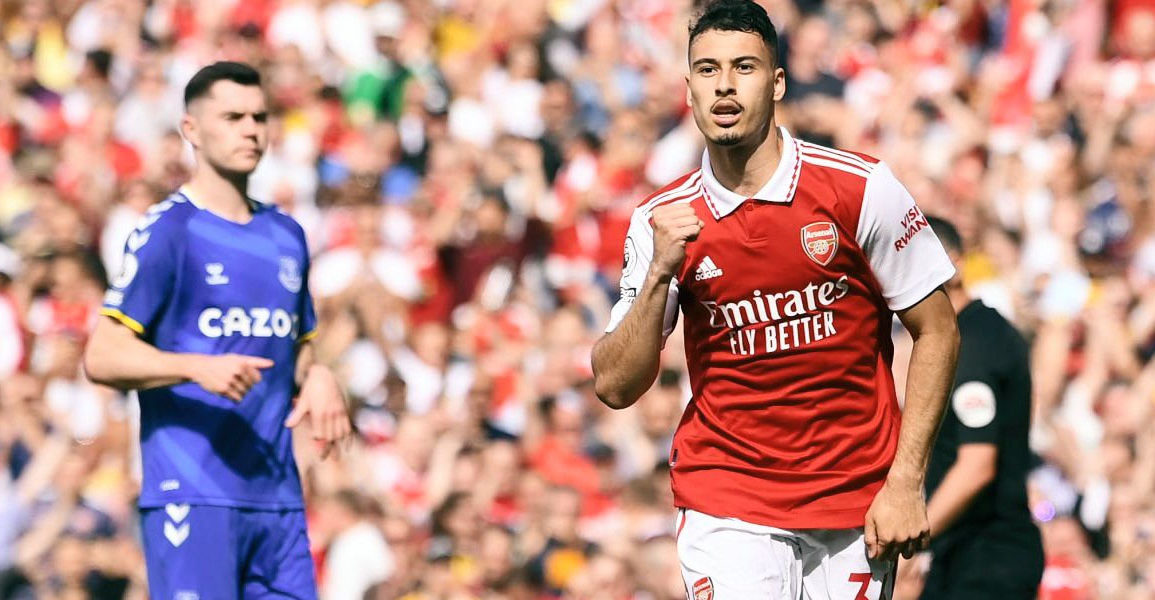 A disappointing final away day for Everton as they were soundly beaten at the Emirates to complete a season of far too many lows. Everton will play Premier League football next season but boy, is there a massive job on for Frank Lampard, his coaching staff and new Director of Football Kevin Thelwell to ensure we never have another season like this.

With the celebrations and euphoria of Thursday evening still fresh in our memories and with some Blues still nursing hangover headaches, we travelled to the capital for the last time in this campaign and a match up with the Arsenal and Mikel Arteta.

The Gunners still harbour hopes of finishing above Spurs to clinch fourth and automatic qualification for the Champions League and Arteta commented in his press gathering, “I can sense that I have the hope and expectations to move this club to the place that it deserves. We’ve done it the way we predicted with the project that we set a year ago. With a lot of young players, with the senior players helping and with our crowds again in our stadium and with a real sense of connection around the place. So we are back in Europe. We don’t know where, it will be decided. Hopefully, it will be Champions League. I believe that we’re going to do what we have to do. We are going to be cheering for Norwich to do what they can do, for sure, and after that, we want to take the club to the next level.”

And he said watching his old club Everton produce an unlikely comeback to avoid relegation on Thursday, has given him more reason to be hopeful. “I was watching it and that gives me more encouragement about what can happen on the last day at Norwich because this happens only in this league. It’s what makes this league such an incredible league, because in many other countries, where there is nothing to play for, you don’t see that type of performances, so we are hoping that something special can happen.”

Hoping for an unlikely Norwich victory over Spurs and looking for a victory over the Blues, Our Tater named his starting line-up: Ramsdale, Cedric, Holding, Gabriel, Tavares, Elneny, Xhaka (c), Saka, Odegaard, Martinelli and Nketiah.

Reflecting upon the emotion that exploded all around Goodison Park last Thursday, Blues boss Frank Lampard looked to the task ahead and forging a new future for the club when he said, “Winning something is far away and the first thing for me to improve is the consistency of performance. To follow a direction that everyone not agrees on but, feels that we’re going in the right direction. We’ve seen other clubs do it but what we have here is a magic that not every club has, so if we can find that direction in certain footballing senses, then maybe we can have successes down the line. I’m not saying next year is going to be this or that. No, we want progression, we want to see a team play with that spirit and… a bit more quality. Those are the things I’ll certainly work for.”

In overcoming that two goal deficit, Everton changed tactics for that titanic second half and Lampard commented, “Who cares about styles of football tonight against Palace? We were direct in the second half, but that style was needed for the moment… and with the players we have.” And he expanded adding, “We needed heart and fire and we found those things. We’ll look at the style. We have time to work now. When you come in mid-season, you don’t get time to work. I want the squad to be more robust, to not have so many injuries and to be able to pick from a fuller squad. There are so many things I want but they don’t all come at once. We’ll work step by step to try to get them.”

And in his final reflections he said, “The scenes you see at the end are the result of everyone coming together for a period of time and it showed huge character. There are things we can improve, I know that and I knew it coming in. I know from working with the group, we’ll do everything we can to improve. I certainly will because you want to be better… but when your back’s against the wall, they’re the most beautiful moments in football. It doesn’t matter whether you’re fighting to stay in the Premier League or fighting to get in the Champions League or win the Premier League. It doesn’t matter what you’re fighting for, it matters that you fight, and didn’t they fight?”

With Premier League survival assured, Frank Lampard used the game to rest a few players who have given their all for the cause and reward others for being part of the squad as he named his starting eleven: Begovic (c), Kenny, Keane, Holgate, Branthwaite, Doucoure, Davies, Iwobi, Alli, Gray and Calvert-Lewin.

On a pleasant afternoon, our referee was Andre Marriner.

An early Arsenal free kick led to a dangerous cross through the Everton penalty area that was cleared and a cross from Nketiah from the right was cleared by Holgate but, Arsenal kept the pressure on a won a corner as Keane blocked an Odegaard shot behind. The corner was cleared and Alli, loudly booed by the home fans, went down looking for a free kick that wasn’t given.

Ramsdale was quick off his line to beat DCL to a long ball from Holgate as Everton finally got across the halfway line but the home side were quickly back attacking and pressuring the Blues defence, Keane heading a Xhaka cross to safety. Everton were playing with a back five of Alex Iwobi at right back, Mason Holgate, Michael Keane and Jarrad Branthwaite taking the central positions and Jonjoe Kenny in an unaccustomed left back role.

Ten minutes flew by with almost total Arsenal possession and Begovic made a terrific reaction save to prevent Martinelli opening the scoring when the ball broke kindly to the Brazilian striker. The Gunners were dominating the play and Nketiah with a wild swing volleyed high over the bar. At the other end, Demarai Gray picked up a flicked-on pass from Alli and crashed a shot at Ramsdale when a chip might have been the better option and through twenty minutes, we were still scoreless. Everton won a corner on the left and Arsenal cleared hurriedly to touch.

Arsenal were awarded a penalty for handball by Alex Iwobi against his old club and after a VAR delay and some time wasting by Asmir Begovic, Martinelli sent him the wrong way with a powerful finish to the keepers left on 27 minutes.

And the Gunners doubled their lead four minutes later as Everton again failed to deal well with a set piece as a corner from the right taken by Saka was flicked-on by Martinelli and Nketiah steered it home.

Keane headed behind for another corner as Arsenal went for the jugular, the set piece leading to Elneny who shot over the target.

On 37 minutes, Donny van de Beek replaced Abdoulaye Doucoure and Everton got forward again as Dele Alli led the attack, spread the ball wide right to Iwobi and when he squared a pass for Gray, he too lifted his shot too high. Arsenal were in almost total control but, Everton began to fightback, Gray going down in the area but, VAR denied off his appeals for a foul by Xhaka before a quick break saw Saka race away with Branthwaite putting him under pressure, Saka eventually curling a shot beyond the far post.

Three added minutes were announced and Xhaka from distanced saw Begovic go full length to push the shot away and after another Arsenal attack, Everton duly countered to stun the Emirates as Tom Davies and Dele Alli got things moving and when the ball broke wide right for Alex Iwobi he found DCL to cross low to the edge of the six yard area where Donny van de Beek arrived to reduce the arrears just ahead of the break.

No further changes by either manager for the start of the second half that saw Everton win an early corner that Arsenal dealt with Holding heading clear. The home side were again enjoying more of the ball but, Everton were competing and making it difficult for Our Tater and his players. Tavares wandering forward fired a shot over the target and again, the opening ten minutes had fairly flown by.

But, the Gunners were in determined mood and right back Cedric Soares restored their two-gal lead on 56 minutes as a corner from the right was played to the edge of the area by Saka and he whipped his shot over Begovic – a training ground move perfectly executed.

Dearie me, another three minutes later and the game was firmly beyond the Blues as Gabriel added a fourth for Arsenal, DCL heading a corner only as far as Martinelli who fed Gabriel for the finish just before the hour mark.

Despite their three goal lead, Arsenal continued to pour forward in search of more and sending plenty of messages to Frank Lampard about the frailties he needs to address in both midfield and defence.

Xhaka was subbed off on 63 minutes being replaced by Sambi Lokonga and Everton responded four minutes later as Anthony Gordon replaced Dele Alli who got a good round of applause from the once again, massed ranks of Blues.

Arsenal made another change as Lacazette replaced Nketiah and Tom Davies picked up a yellow card following a clash with Elneny that referee Marriner thought Tom made too much of – simulation the offence.

Into the final twenty minutes of the game and the season, and Jarrad Branthwaite went down holding his right knee but got up to carry on. Martinelli set up Lokonga for a shot that was saved, Arsenal won two more corners that were defended. More changes as Pepe replaced Saka for the Gunners and Tom Davies came off to give Isaac Price his Premier League debut with a little over eleven minutes to play.

Arsenal were now spraying the ball around and stretching Everton and their superiority was confirmed as they went nap on 82 minutes as Martin Odegaard completed the rout with a cool sidefoot finish.

Arsenal though were still keen on adding to their tally and Lokonga and Martinelli drove into the Blues area to set up Lacazette who curled his shot wide. DCL was harshly penalised for manhandling Gabriel as he continued to work hard up front despite time ebbing away. A decent break begun by Iwobi and Gordon that saw Kenny release DCL who crossed for Price who couldn’t make a decent contact.

Three more added minutes were announced and went by without further notable incident, and the season came to a conclusion.