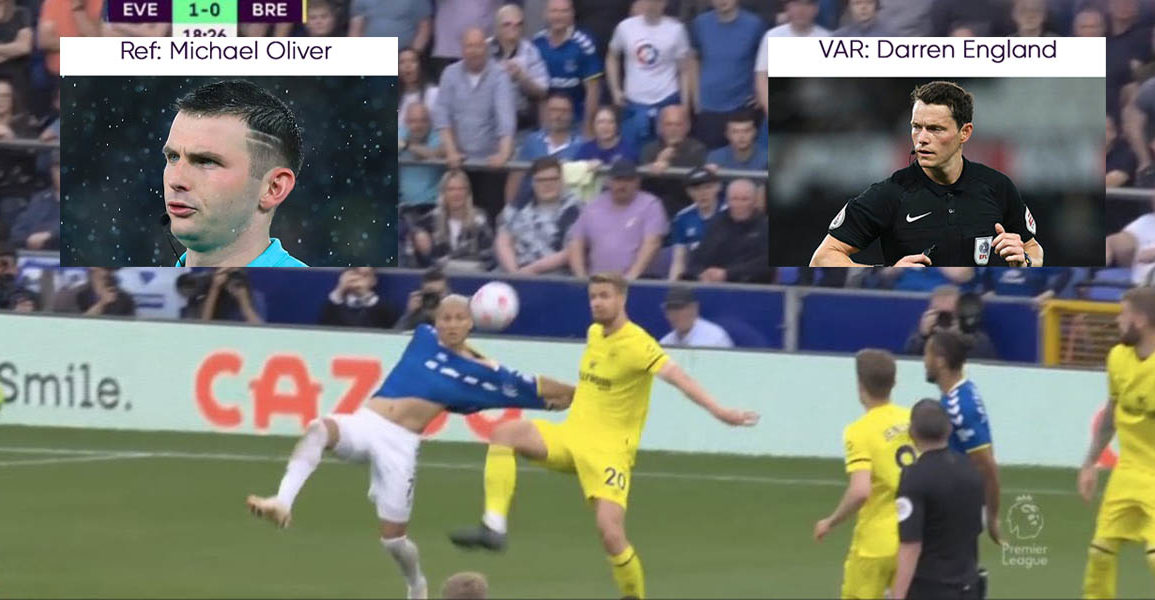 If anyone thought Brentford came just to make up the numbers they were mistaken as having fallen behind to an early Richarlison strike, they made the most of a straight red card for Jarrad Branthwaite to come from behind again and then go in front.

Seven points from Chelsea, Leicester and Watford has eased some of the pressure and tension around Everton but with two more home games against Brentford today and Crystal Palace on Thursday, relaxing and thinking the job was done was nowhere near the thinking in the camp.

And that was made abundantly clear when Frank Lampard addressed the media on Friday saying, “it’s a nice return considering the types of game, against big opponents and going away from home and changing that story for us. But, we are not done, we are not over the line. The minute you switch off, or stop doing the good things, this game can punish you.”

The Blues boss stressed further adding, “we have to make sure we approach the next games with exactly the same attitude and pick up the results we need. The message can be a bit repetitive but, it is important to repeat. We have to remember our situation and that every opponent can give you different problems come match day.”

Turning his attention to squad availability and he advised that Fabian Delph, who has made a welcome contribution upon his return to the side, wouldn’t face Brentford having picked up a “small muscle injury” and may not recover in time to feature in the final week of the season. In better news, Ben Godfrey was said to be “very close to full fitness” and could be involved. Dutch loaned Donny van de Beek has recovered from a groin strain and Lampard commented, “I’d like to think he might be involved on Sunday, if not on Thursday against Palace.”

Brentford ensured they’ll be playing Premier League football again next season by thumping Southampton 3-0 last weekend and deserve congratulations for doing so having been tipped for a quick return to the Championship by some at the start of the season.

Brentford were Frank Lampards’ first opponents when the Blues won 4-1 in the FA Cup clash in February and Bees manager Thomas Frank was hoping for a better return from his second visit to Goodison. He commented, “I think there’s no chance of my players taking the last two games lightly. The possibility to finish in the top ten together with their professional pride will ensure they give it their all against Everton and Leeds.”

He can take pride in the way his team have performed this season and that saw him nominated for Manager of the Season. He modestly said, “it’s an acknowledgment of all the great work the players and staff are putting in. I understand I am the front man but, nobody can do it on their own. Our key value is togetherness and the way we do that as a club is unique, it is a privilege to be nominated.”

Frank advised all the squad that were available for their win over Southampton, plus Sergio Canos, were available and having weighed up his options, named his starting lineup: Raya, Ajmer, Jansson, Bech, Henry, Jensen, Norgaard, Eriksen, Mbeumo, Wissa and Toney.

On a bright, breezy and blue smoke laden afternoon at the Grandest of Old Ladies, Michael Oliver was the referee.

An absolute cacophony of noise welcomed the team to the pitch as everyone inside Goodison knew that a victory would all but secure Premier League status for next season. All four side of the ground were singing in unison, something not witnessed since that glorious night when Bayern Munich were dispatched.

And the Blues went forward from the start, Iwobi to Doucoure and then to Gomes to Mykolenko to win the first corner that saw a shot screwed wide. And when DCL rose to flick on a header for Richarlison, Gordon reached it and was denied by Raya, Richy putting the rebound just wide. Holgate with a needless pull of a shirt conceded a free kick just right of the Blues area, and the header from the cross went over the bar. Iwobi collecting a long clearance chipped the ball forward for Richarlison who beat the keeper and the post with his first time volley.

Holgate cross field for Iwobi and onto Gordon saw him win a second corner that Brentford defended comfortably. Gordon bursting onto indecision in the Brentford rearguard was felled by Bech and when the free kick came in, who else but Richarlison was on hand to get the telling touch for the opener on eleven minutes and Goodison exploded.

Spirit of the Blues rang out from all four sides in an extraordinary and deafening demonstration of the passion Evertonians have for our club. Oh my God, Richarlison had his shirt clearly pulled right in front of the referee who waved play on and as Brentford countered, Jarrad Branthwaite unluckily clipped the heels of Mbeumo and referee Oliver immediately and without hesitation brandished a straight red card. The resulting free kick was bent wide by Eriksen but, Goodison had switched momentarily from delight to downright anger.

Getting forward again, Gordon won a third corner that the less said about, the better. Neat footwork from Doucoure saw him get away from three Bees before Norgaard took him out and was rightly yellow carded. Alex Iwobi with some excellent last ditch defending to win a goal kick won great applause from an appreciative crowd.

Brentford with the extra man we’re trying to stretch Everton and a low cross from the left caused a moment of concern before the ball was hooked behind for a goal kick. When Richarlison went down and Eriksen sportingly put the ball into touch, this incensed Toney who vented his anger at the Dane with Doucoure stepping in to prevent things getting stupid.

Richarlison returned after getting his right arm strapped and passing the half hour Gordon was again fouled having switched from right to left with Richarlison. Raya with a full length dive caught and held a 30-yard blast from Gomes and Brentford countered quickly to win a corner on their right. The initial cross was headed clear but Brentford got the ball to the left and Wissa squeezed home the equaliser with the help of a fortuitous deflection off Seamus Coleman.

Ajmer was booked for bringing down DCL as he went charging down the left flank, the free kick leading to a wild shot from Doucoure that was miles off target. A 65-yard lung-busting surge forward by Mykolenko came to nothing as Richarlison was crowded out upon receipt of the ball.

Brentford were coming and strong and when Pickford punched a shot from Mbeumo away, it was Iwobi again with the telling block on the second shot from Jensen. A long punt downfield by Pickford got the slightest of flick ons by DCL and Richarlison was clattered by Jansson… Penalty. And our Brazilian ace smashed the spot kick into the top right corner sending Raya the wrong way on 45 minutes.

Three added minutes were announced, not that anybody could hear above the deafening response to the Blues having regained the lead and the chorus of boos that rang down for the referee as he left the field at half time.

Brentford made a change for the second half, 27 replacing 29, whoever the hell they are as the names on their shirts must have been written with crayon (I’d lost me proey in the pre-game melee in the streets).

Richarlison with an early cross low through the Brentford area with DCL unable to get on the end of it. Iwobi again defending superbly hooked a ball clear and Wissa hit an aimless effort miles wide and high. JP with a acrobatic punch cleared a cross from Eriksen, did he do it for effect (?) as the offside flag was raised.

Brentford, remembering that they had the extra man, we’re back to trying to stretch the Everton defence – the Blues working tirelessly to keep them at bay and earning rapturous support with every clearance or goal kick won.

Alex Iwobi was penalised for a foul on Henry and Eriksen hit a free kick that Pickford parried and Gordon completed the clearance. Toney again earned the ire of both his own and Everton players for facing up to Mykolenko who stood his ground, referee Oliver having a quiet word with the Brentford striker.

A cross field ball from Iwobi saw Richarlison impudently control the ball with his shoulder before misplacing his pass inside, and passing the hour mark, Gordon conceded a corner on the Brentford left. Eriksen flighted it to the near post where Wissa got the perfect angled header to level the game again.

And it got immeasurably worse two minutes later as a deep cross from the right saw Henry, the left back, rise and power his header well beyond the reach of Pickford.

Goodison had suddenly become apprehensive, the final 25 minutes were going to be risky chasing an equaliser with one less player. Everton made a double change on 72 minutes, Demarai Gray replacing Anthony Gordon and Jonjoe Kenny coming on for Andre Gomes.

Brentford made another change on 75 minutes, 30 replacing Wissa. Another Brentford corner was defended and a long ball by Pickford saw Richarlison win a free kick wide left that Gray lofted to the back post where Raya tipped a Doucoure header over for a corner that came to nothing.

Into the final ten minutes and the crowd tried to lift the players as Salomon Rondon prepared to come on. Crosses from Gray and Richarlison went long and then into the arms of Raya and Rondon waited on the touchline to eventually replace Coleman after Eriksen had shot wide. Six and a half to play, could Everton find another late goal ?

And the cause got even tougher when Salomon Rondon got a straight red card for a poor challenge, Everton down to nine players with less than three minutes remaining in normal time.

Excellent positioning and header from Mason Holgate prevented Eriksen adding a fourth goal and four added minutes were announced, and Brentford kept possession and went looking for another goal. It was route one now for Everton as another long ball from Pickford found Richarlison only for his weak cross to be an easy gather for Raya. And time expired.