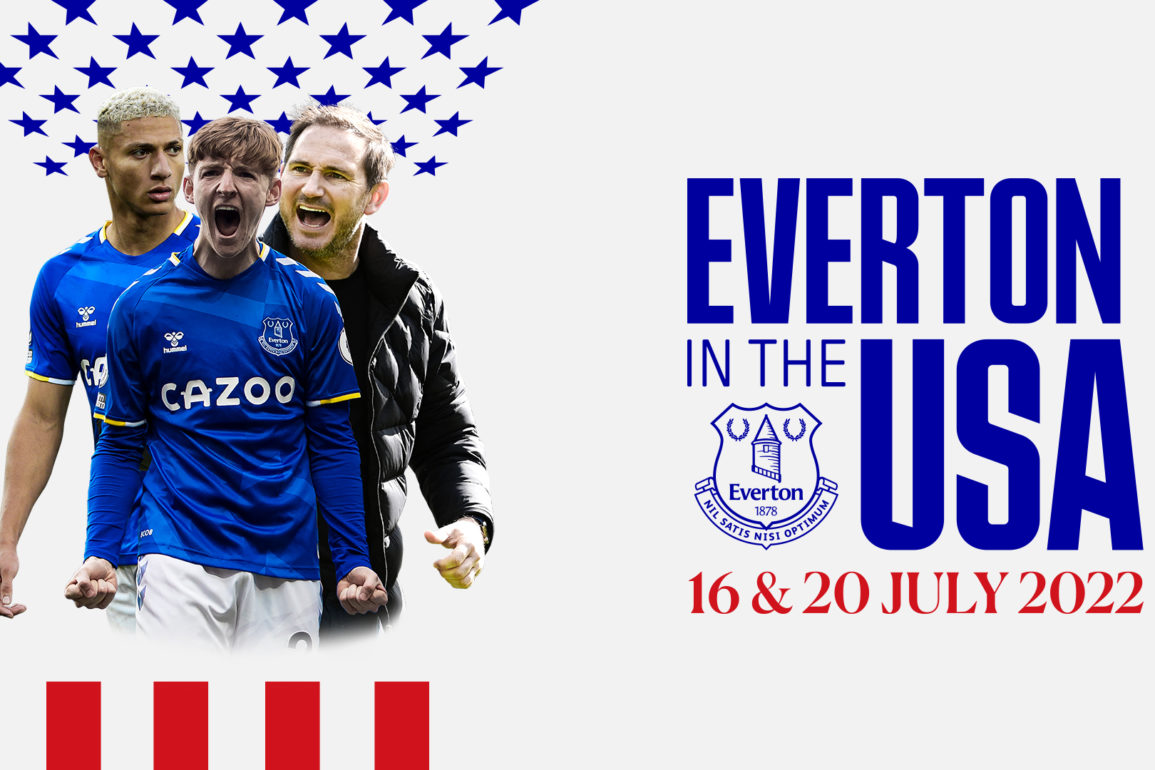 Everton To USA For Pre-Season

Everton will return to the USA this summer for two pre-season fixtures, with the Blues set to face familiar rivals Arsenal in Baltimore and Major League Soccer’s Minnesota United FC in Minneapolis.

The Blues will head to the East Coast to play Mikel Arteta’s Arsenal on Saturday 16 July (kick-off 7pm ET, 12am BST) at the 70,000-capacity M&T Bank Stadium in Baltimore, Maryland – home of NFL side Baltimore Ravens.

Everton will then travel to Minneapolis to take on Toffees legend Adrian Heath’s Minnesota United at their own Allianz Field on Wednesday 20 July (kick-off 7pm CT, 1am BST).

Ticket details and information about television broadcasting and how to stream the games – including via evertonfc.com – will be confirmed in due course.

Exciting engagement events with US-based fans, travelling Blues and US Supporters’ Clubs in areas including Baltimore, Washington DC and Minneapolis are being planned, with more information to be communicated in the coming weeks.

All 22/23 Season Ticket Members, Corporate Members and Official Members based outside of the US & Canada will be able to stream both fixtures live.

Everton were the only Premier League team to visit the USA in 2021, lifting the Florida Cup after defeating Colombian giants Millonarios 10-9 on penalties after a 1-1 draw at Orlando’s Camping World Stadium.

The Club has made eight pre-season visits to the US since 2004, playing in cities including Chicago, Washington DC, San Francisco, LA and Miami, and became the first overseas team to defeat the MLS All-Stars in the annual exhibition fixture in Sandy, Utah in 2009.

Everton manager Frank Lampard said: “As well as using the incredible facilities in preparation for next season, this visit will give us an opportunity to connect with our proud and passionate US fanbase. In my short time at the Club, I have learned how Everton is one of the most-followed English clubs in the USA.

“Having spent part of my playing career on the East Coast – and playing at M&T Bank Stadium myself in 2009 – I know how much excitement there is for football in the United States, and it is continually on the rise.”

Richard Kenyon, Everton’s Director of Communications, Revenue and International Growth, said: “We are committed to building on our presence in the US as a key strand of our international strategy, and are looking forward to engaging with our US supporters – and creating new ones – when we visit in July. We understand the dedication of our US fans with many of them watching early morning games, travelling hours cross-country to meet up with fellow Blues to support the team, and many heading over to Goodison Park when they can.

“We are hugely appreciative of that support and look forward to working with supporters to design some exciting activities for supporters based in the US and those travelling over from the UK.

“The fixtures will see us play against strong opposition in excellent facilities and, of course, give us the chance to reunite and go up against sides managed by two former Blues in Mikel and Adrian.”

Everton’s 2022 US pre-season activity and the recent expansion of the Club’s Official Supporters’ Club programme in the US are major elements of Everton’s thriving international strategy, which has a targeted focus on North America.

In April 2021, Everton announced it had opened its first US office in Miami, to support the Club’s growth and development strategy across the Americas.

After a successful summer campaign in 2021, Everton has expanded its soccer schools programme across 16 US states this year, while several US soccer clubs, in states including New York, Florida, and Ohio, signed up to the Everton International Academy Affiliate Programme (EIAAP). The EIAAP provides access to the finest coaching knowledge from Everton’s distinguished Academy and supports the growth and player development programmes of clubs at all levels.

Ticket details and more information about how Everton’s US pre-season fixtures will be broadcast and streamed – including via evertonfc.com – will be announced in due course.

Everton’s affiliated US Supporters’ Clubs and Official Members based in the USA will receive information directly on pre-sale ticket opportunities for both fixtures.

The Club can confirm that no official travel packages for the trip are planned.