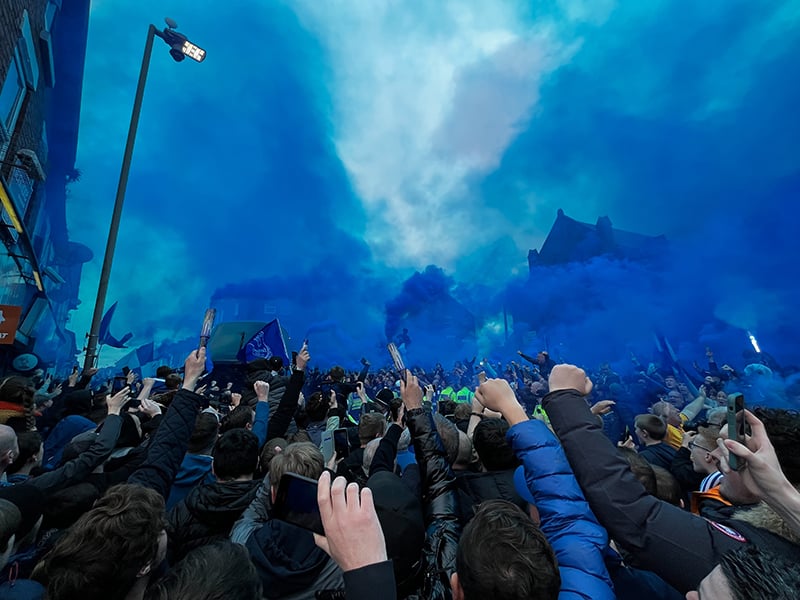 There is an old adage that says a picture is worth a thousand words so on Sunday afternoon those photos must have been the equivalent of war and peace.

It was a sight to behold, thousands of Evertonians lining the streets to welcome in the team coach with an atmosphere that would’ve shattered Richter scale before sending the team on to a massive three points in the quest for survival.

Everton Football Club is an institution of English football with a rich history – a history and legacy to be proud of and one that sits well amongst the biggest and best of the English game. Everton are not only ever present in the current Premier League format but a mainstay in topflight of English football; yet, right now our club’s time in Premier League is at its most precarious for many many years.

There are some startling comparisons to the relegation battles of 1995 and again in 1998 – the mis management of the club at board level has, in some ways, been replicated all these years later but with much bigger financial catastrophes. The Everton of the 90s spent a pittance compared to the Everton of the last six years. Moshiri’s reign has been littered with costly financial errors and the culmination of a sustained period of hiring and firing managers and making bad investments in substandard players could genuinely see Everton playing Championship football next season. It’s staggering to think in the region of £500m and more has been spent to assemble a squad that now languishes in the PL relegation zone.

However, all the fury and distaste have to be put to one side; the remaining five games are the biggest this club has faced since those dark and gloomy days of the mid 1990s but we’re in this together. We are in this to fight, and we are in this to keep Everton Football Club in the Premier League. It’s an old cliche but Everton have five cup finals remaining this season and only victories will do. These players are simply fighting for the lives of the club and the fans must be there with them.

Despite another mammoth victory the critics still remain. Take Simon Jordan on Talksport as an example, a long-time detractor of Lampard, Jordan has always been of the opinion he hasn’t earned the right to be in this job and maybe he hasn’t, but did Viera earn the right to take the job at Crystal Palace? His CV and previous as a manager would suggest not or how about Jesse Marsch? before he was appointed at Leeds, he had relative success at Salzburg but given they’ve won around 16 Austrian league titles and the competition is of a poor standard it’s hardly earth-shattering success; his move to RB Leipzig yielded little and Marsch was given the boot after just five months in the job.

Jordan claims that Sunday’s win wasn’t down to Lampard but the Evertonians; now the atmosphere – before, during and afterwards was incredible and Goodison was literally rocking but the Everton fans didn’t pick the team, they didn’t set out a match winning game-plan nor did they make the right substitutions at the right time; this was down to Lampard and his team. Jordan Also claimed Everton deserve to be relegated, well unless the rules have changed then you only deserve to be relegated if you finish in the bottom three after 38 Premier League games.

The game itself felt like it went on for an age; with 7 minutes injury time added on just to make the Evertonians suffer that bit longer but when Kevin Friend finally blew the whistle the joy and relief was palpable. However, unlike Jordan the Evertonians knew the part the manager played in this victory and as clouds of blue smoke filtered through stadium Lampard headed towards the Gwladys Street where he was given a huge ovation; there feels like there’s a connection between manager and fans, massively different to the fury a few months ago when we had to endure Benitez for far too long.

Unlike Viera – who walked into a well-run club whose recruitment policy has been eye catching adding young talent like Eze and Olise in recent seasons – Lampard has taken over at a club sinking fast, a squad of players where confidence is practically non-existent and a fractured fan base who have become completely disillusioned with the club and the hierarchy, but he’s endorsed the challenge and is bringing the fans back to the club.

We’ve all bellowed the words to Royal Blue Jersey at Goodison and beyond, particularly the line ‘Fight, fight, fight with all our might for the boys in the royal blue jersey…’ that’s exactly what we need now – passion and fight. The Chelsea result was incredible, but we now must move on to Leicester and repeat it again at Watford.

We all have our part to play – the manager, the players and the fans. We are in this together. It is a fight we cannot afford to lose.

UP THE F*CKIN’ TOFFEES!