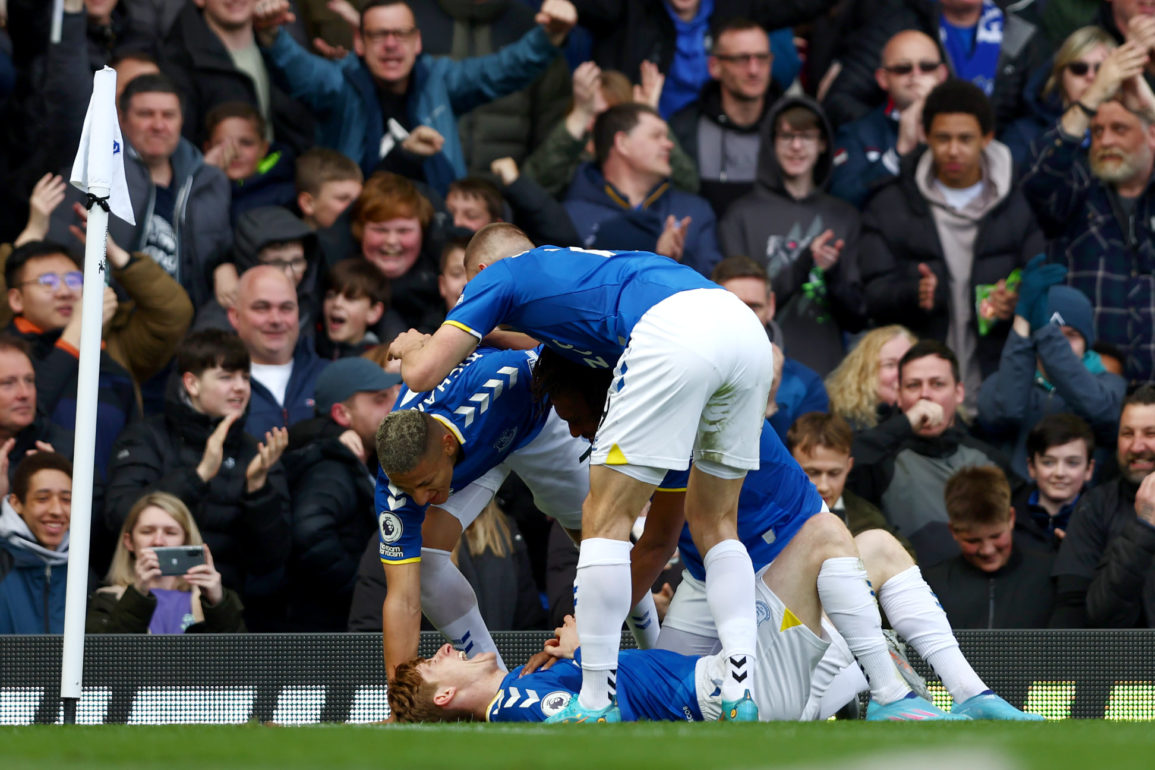 April looked a tough schedule from the outset and so it proved through the five games our beloved boys in Royal Blue embarked upon. Five games that included fixtures against high-flying West Ham and the RS, a Manchester United that nobody could predict how they would play, mid-table Leicester and an important north-west ‘derby’ with Burnley.

We opened the month at West Ham where a Cresswell free kick strike in the first half was cancelled out by a rare and most welcome equaliser with a stunning volley from Mason Holgate. However we were only level four minutes before Bowen pounced on a rebound to put the Hammers back in front and then Michael Keane was dismissed on a second yellow card.

A midweek excursion to Turf Moor was the next port of call and having fallen behind, the Blues took a 2-1 lead into half time courtesy of two Richarlison penalties after Anthony Gordon and then Vitalii Mykolenko were brought down. Burnley rallied to level before the hour mark and unbelievably stole the three points with a late winner from substitute Vydra to break Evertonian hearts.

Manchester United were next up and at Goodison, Everton are a different proposition and so it proved as, roared on by the tremendous home support, the Blues quelled the early threat from the right caused by Telles and completely nullified the threat posed by Ronaldo. It might have taken a fortuitous deflection off the hapless Maguire but, Goodison didn’t give a toss as Anthony Gordon won the plaudits for his increasingly important efforts as his shot eluded the despairing dive of De Gea to bulge the Park End net. One terrific save late on from Jordan Pickford to deny CR7 preserved the lead and the points were ours, and some faith restored that the Great Escape was back on.

We had to wait eleven days till the visit of Leicester City to the Grand Old Lady and for large parts of the game, if we’re honest, we were second best to the East Midlands outfit who took less than five minutes to open the scoring. The visitors continued to enjoy the better of the possession and on another day might have extended their lead and put the game beyond the Blues. For our part, Everton dug in and kept on trying to find a way back… and as the time ticked away, it began to look like either a fluke or a major slice of luck might be needed. Richarlison had had a couple of chances to pull the Blues level however, things just didn’t appear to be going his way until we passed the 90-minute mark and five added minutes announced… and following determined play from substitute Salomon Rondon, and a mishit shot from Seamus Coleman, our Brazilian ace got the all-important last-gasp equaliser.

The short walk across the park was the final game in April and literally nobody gave Everton a snowballs chance in a furnace of getting anything from the RS. Frank Lampard though had other ideas and his gameplan devised to deny the RS time on the ball and to frustrate and stifle them worked excellently through the opening 45 minutes. Everton playing on the counter attack even carved out a couple of chances, most notably a cross shot from Abdoulaye Doucoure and a penalty appeal for a foul on Anthony Gordon that saw him booked for diving when video evidence suggested otherwise, and hopes began to rise that we might get something from the game. The second half saw a spirited start by the Blues and another, even more obvious penalty appeal for a foul on Gordon was waved away – things were definitely conspiring against us. Almost inevitably, those decisions against us worked in their favour as late goals from Robertson and Origi settled the outcome and sank the Blues into the bottom three.

The five games therefore saw three losses, one win and one draw and just four points from a possible fifteen gained… May looked like being ultra intense. Nineteen players were used in April by Frank Lampard with six featuring in all five games and four – Jordan Pickford, Richarlison, Alex Iwobi and Vitalii Mykolenko playing every available minute.

The Man of the Match awards were spread around with Ben Godfrey winning a low poll for the West Ham game; Richarlison claiming an easy runaway win for the loss at Burnley; Jordan Pickford for preserving the win over Manchester United; Alex Iwobi for his non-stop effort won the Leicester poll and that left Anthony Gordon to claim the plaudits for his unrewarded contribution in the ‘derby’ across the park.

The fascinating thing about running the Man of the Match polls and keeping a track of the running totals is seeing how fans respond to not only the match results but, the individual performances and the effort of the players. So, with all the votes now counted and double checked for April – and they needed to be – as only a handful of votes separated the top three, we are proud to announce the following result.

In second place and as ever willing to chase what appears to be a lost cause – Richarlison.

He’s only been with the club four short months, during which time his homeland has been plunged into a war it doesn’t deserve and concern for family and friends must be paramount in his thoughts. However, his on the field performances have shown a depth of character and athleticism that is fast endearing him to the Goodison faithful and having garnered just over 18% of the total votes cast, to win by just one vote, put your hands together and let’s hear it for our GrandOldTeam.com Player of the Month for April – Vitalii Mykolenko.