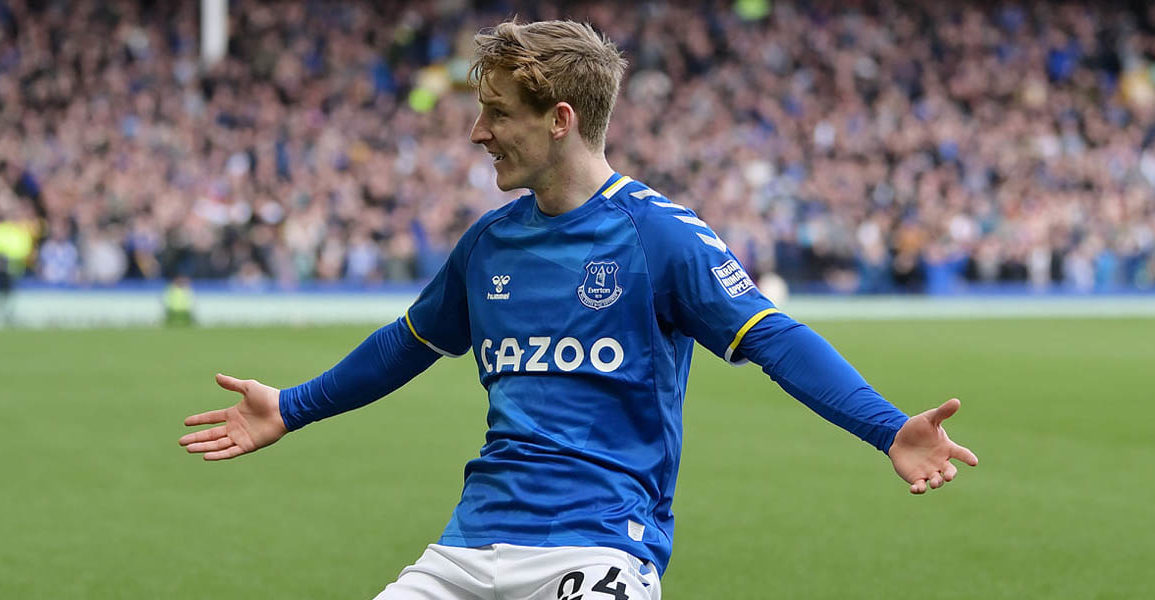 Outstanding contributions from Allan, Vitaliy Mykolenko, Alex Iwobi and my Man of the Match, Richarlison saw Everton gain a vital three points with Anthony Gordon getting the winner.

With Everton beginning to run out of games with which to save their Premier League status, the remaining fixtures at Goodison Park will likely be crucial in closing weeks of this turbulent season.

Blues boss Frank Lampard stressed how important the partisan Grand Old Lady crowd has been and can still be when he said, “I can only ask the fans to turn up tomorrow and be absolutely behind us as they have been since I’ve been here.” He added, “We’ve won four out of six at Goodison, which is a contrast to our away form and (we) need to keep it going. It shows how strong we can be together.”

With some sections of the media suggesting that, in the wake of Wednesday evenings loss at Burnley, pressure is building on Everton manager Frank Lampard, he addressed his Friday media gathering by saying, “I understand the situation, the fans have passion, they live and breathe this club. I do too, I have been here five minutes in football terms and want us to stay in the league. I have to handle that because I have to do my job. I am proud to manager here and keep the history of this club going in a positive way.”

In team news ahead of facing United, Lampard advised that both Seamus Coleman and Fabian Delph are in contention for selection while both Michael Keane and Allan are available having served their red card suspensions. Donny van de Beek is ineligible being a loaner from the visitors and Yerry Mina, Nathan Patterson, Tom Davies and Andros Townsend all remain on the injured list.

For our visitors the pressure is to improve their form and results in order to try and secure a top four finish and automatic entry into the Champions League for next season. Having slipped to seventh, the United interim manager Ralf Rangnick is another under pressure and in his case, on two fronts – he needs points for that top four challenge and the search for a permanent replacement for him in the Old Trafford hot seat.

He brushed off questioning on the managerial situation when he commented, “I agreed a contract as an advisor, and we will speak about that in the next couple of weeks I’m sure. At the latest, at the end of the season. But right now, my full focus is on tomorrow and the trip to Goodison Park.”

Our referee on a cool but, bright afternoon was the rotund Jonathan Moss.

After a marvellous minute of applause in memory of Terry Darracott, Everton kicked off in bright sunshine to attack the Park End. Allan with a couple of good early tackles showed he was up for it, and a good chase to track Telles saw the ball run out of play for a goal kick.

Keane was lectured for a clumsy challenge on Telles and from the free kick, Pickford turned a shot from Rashford round the post for a corner that was cleared and Ronaldo caught offside. Pickford with another smart save denied a Rashford header from a cross by Fernandes after the visitors pounced on a loose pass by Keane.

Keane with a vital block denied Ronaldo a clean shot after he was found by Fernandes as United settled the better through the opening quarter of an hour. Wan-Bissaka through the back of Richarlison saw Pickford race from his goal to remonstrate with referee Moss about the challenge that didn’t see the offender booked.

Another loose pass from Keane gave Fernandes to break away and cross without any other United player getting forward to pressure the Everton defence. A quick ball from Richarlison set Iwobi free on the left to feed DCL for a cross that was too easily defended and cleared. A good tackle by Delph saw him find DCL who incurred the wrath of the crowd for losing possession far too cheaply.

Somewhat against the run of play, to be perfectly honest, Everton took the lead in the 27th minute as Allan and Gordon combined to win the ball in midfield and AG fed Richarlison on the left. He moved forward and then cut in off the left to find Iwobi, and his little lay off rolled invitingly into the path of Anthony Gordon and via a smashing deflection, his shot sent de Gea the wrong way and Goodison erupted.

A free kick on the right saw Gordon cross and a glancing header from Keane went just too high. Rashford with a ball inside Coleman found Telles on the overlap, Ben Godfrey with a good header to get the cross away to safety. A high boot from Fred on Iwobi gave the Blues another free kick on the right and another chance to put the visitors under pressure, that they managed to defend.

United getting forward sent a couple of crosses into the Everton penalty area, Pickford with a punch and Alan with a calm down header before an Everton counter saw de Gea superbly turn a deflected shot from Richarlison over for a corner that they defended.

United replaced Fred in the 37th with Pogba, in an apparent tactical change, and Allan let him know early on that he wasn’t going to get time on the ball to pose and strut around. Fernandes again found Telles for a cross that JP dealt with easily and we entered the last five minutes of the half.

Pogba released Telles again for a cross from the left and Mykolenko did well to get back and head clear at the expense of a corner that Richarlison cleared easily at the near post. One added minute was announced as Mykolenko got forward to win a corner that de Gea punched clear and a first half that had seen United enjoy more possession ended with the Blues leading and that’s all that mattered.

Neither manager made any changes for the start of the second half that began with Lindelof clattering Richarlison and from the free kick, Mykolenko got forward to beat Lindelof but his cross was easily dealt with. United countered quickly to win a corner that Delph cleared as far as Rashford and Allan blocked his shot.

A long ball from Fernandes aimed for for Rashford caught everyone out and thankfully sailed wide ahead of Pogba rightly being booked for a poor challenge on Gordon, the free kick leading to Richarlison winning a corner that was cleared. Mykolenko then pressured Wan-Bissaka into conceding another corner that saw Godfrey head just over the crossbar.

A deep cross by Telles allowed Richarlison to get to midfield and lead Everton out and then Delph to Richarlison and onto Mykolenko saw a cross come in as Wan-Biasska clattered him. Everton kept the pressure on to win another corner and Everton began to grow in confidence with the crowd urging them on.

Passing the hour mark this was now an even game, United slightly the more cultured side but, Everton battling and competing like their lives depended upon it… which they do !!!

Elantra and Mara were 64th minute changes for United replacing Rashford and Matic respectively, while Everton warmed up Doucoure, Gray and Alli.

Gordon with a charge into the United area off the right flank saw his cross cleared and the visitors countered to win two right wing corners that produced nothing.

Demarai Gray replaced the largely ineffective Calvert-Lewin on 71 minutes, DCL appearing to hold his right thigh as he went to the bench. Iwobi with a strong challenge on Fernandes raised a cheer. Nice interplay between Mykolenko and Delph saw the latter spray a ball wide to Gordon who was denied by Telles. Anthony Gordon was harshly booked for a slip that saw him collide with a United prima-donna.

Gray with a ball through for Gordon saw him go down in the area under pressure from Telles, no penalty and United countered to win another corner that failed to produce. Good defensive work by both Mykolenko and Richarlison saw the latter again fouled by Wan-Bissaka who somehow hadn’t yet seen a yellow card.

Pickford made a decent stop low to his right from Pogba as we hit the 80-minute mark and United began to lay siege to the Everton goal with the Blues defending manfully if a little hurriedly at times.

Everton made a second change on 84 minutes as Fabian Delph got a well deserved round of applause when replaced by Abdoulaye Doucoure. Good tracking back from Alex Iwobi forced Pogba to run the ball out of play as valuable seconds ticked away and Goodison again raised its voice, and again as Ronaldo was booked for petulance.

Good work by Coleman denied Sancho and find a Gordon who drew a free kick to waste some more time. And then Gray and Iwobi did well down the Street End as Goodison went incredulous at the announcement of five added minutes.

Pickford with a reaction save to deny Ronaldo set up by a header from Maguire and Everton got forward again to eat more valuable time off the extended clock. Pickford with a telling punch cleared a left wing cross and a long clearance from Keane brought a deliriously welcomed final whistle.