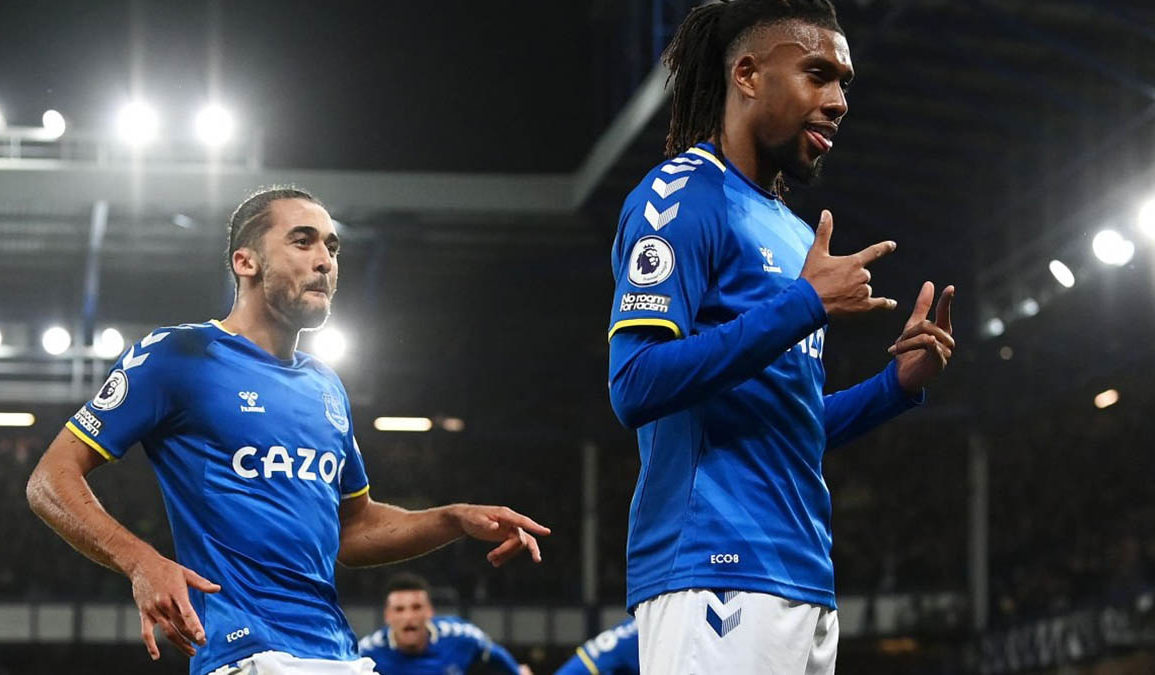 Not a classic by any means but, a determined effort from Everton with Anthony Gordon outstanding again, saw them overcome the loss of Allan to a harsh red card and an unlikely hero in Alex Iwobi score a priceless winner deep into added on time.

Four days after the disappointing loss to Wolves, a resurgent Newcastle United were next to tip up at Goodison in what many in the mainstream media, and many Blues supporters, were calling a ‘must-win’ game for Everton. Not only were the three points of paramount importance in the fight to retain Premier League status for next season but, a win would boost both the teams and supporters morale for the FA Cup trip to Crystal Palace on Sunday.

Speaking at his Finch Farm press briefing, Blues boss Frank Lampard said, “We need results and that will change the face of everything. The biggest thing is to absolutely stay with a belief we can do that. I’m not asking for casual belief, I’m talking about a proactive belief. For us, it’s not about having fear about what might be – it’s what we can action and what can we deal with. We can deal with these 12 Premier League games in front of us. Things can change very quickly. It can change on a not-so-good performance that gets you three points and that feeling of a boost. Our focus has to be on what can we do with these 12 games to get us where we want to be.”

He added forcefully, “The players have to perform at a level and with a passion that engages the fans. I’m expecting everyone [players and fans] to be together, fighting. We have 12 games left and every one of those is massive. We want to start the game well and engage the fans, because when we do that they are absolutely with us and we are a force. That goes for the 90 minutes but starting well is very important. We saw that against Leeds. We started really, really well, aggressively, and we got our goal. That changed the face of the game.”

In squad news for the Newcastle clash, Lampard advised that Dominic Calvert-Lewin would be given as much time as possible to prove himself match fit when he noted, “Dominic trained lightly yesterday (Tuesday) on the back of not feeling great, so we’ll see how he is again this afternoon and then look at the squad tomorrow.” The suspension for Jonjoe Kenny was one of four changes Frank Lampard made as he settled on this starting eleven: Begovic, Coleman (c), Holgate, Keane, Godfrey, Doucoure, Allan, Gray, Iwobi, Gordon and Richarlison.

For Newcastle who have taken ten points from their last five games, the threat of another drop into the Championship has largely, not entirely, been swept away and the Toon Army are sensing a major corner has been turned in the fortunes of their club.

New manager Eddie Howe has steadied the ship and turned results around but, he wasn’t getting complacent when he addressed the media saying, “I’m sure it’ll be a very big occasion. We have to be fully prepared for what I’m sure will be a really good atmosphere. I think there’ll be a lot of emotion in the game. We need to handle that ourselves and control our own start to the game, and try and impose ourselves as we have done in this spell of away games; I’ve been really impressed with how we’ve conducted ourselves and how we’ve managed certain elements of all of the games we’ve had in recent weeks.”

He went on to add, “When you play away from home, you need to show a lot of different characteristics. What pleased me against Chelsea was the discipline and the tactical adaptability we showed in the game, and I thought we controlled the tempo of the game really well – which you have to do when you play against those teams. The only unfortunate thing for us is that one slight lapse cost us a massive point. We have to learn from that and review it, as we have done. I was very pleased with the majority of the game.”

In terms of his player availability, Howe advised that Joe Willock ‘should be okay’ whilst Jonjoe Shelvey and striker Joelinton are both ‘touch and go’ and he praised Sean Longstaff who played his first game in weeks at Chelsea when he said, ‘I thought he was excellent.’

Our referee was Craig Pawson.

Newcastle annoyed Goodison even before the kick-off by making Everton attack the Gwladys Street End in the first half, and they were booed and whistled as soon as they gained any possession of the ball. And an early challenge that saw Gordon take a spill off the pitch raised the volume levels another notch.

Godfrey on a charge fed Gray but his low cross came too early for Richarlison even though Dubravka spilled it. The first Blues corner saw Gray find Godfrey for a decent header that Dubravka claimed comfortably.

Everton with much the better of the first nine minutes without creating a really good chance and they were nearly caught out by the first attack by Newcastle as Fraser got a low cross in from the right, Alex Iwobi getting back to clear the danger before a cross from the left found Wood, his tame header straight into arms of Asmir Begovic.

Anthony Gordon fouled again took exception to the treatment he was receiving and after a push in the back on Guimaraes, had a nose to nose conversation with the Brazilian before referee Pawson intervened to calm things down. Newcastle had weathered the early Everton attacks and were beginning to establish a foothold in the game as we neared the twenty minute mark. Willock with a quick ball through the middle released Fraser and it was Seamus Coleman who chased him down and cleared the threat.

Doucoure was slightly fortunate to escape a yellow card after what appeared to be an elbow into the face of Joelinton, who didn’t make a meal of the collision. Burn wrestled Richarlison to the ground as he tried to get on the end of a pass from Iwobi, no foul given and Newcastle countered to win three corners in quick succession as Everton struggled to clear their lines, Allan eventually getting the ball clear.

Almiron was hurt as Newcastle launched another attack and win a corner that saw Wood head well over the bar from Frasers’ cross, and we reached the half hour mark still without a meaningful effort on target from Everton, and Newcastle getting forward to win another corner that saw Burn penalised for a foul on Michael Keane as he headed clear under pressure.

Almiron took a clear dive over the leg of Allan and somehow escaped a booking and Allan raised the volume with a good tackle and some neat footwork to take him away from two Newcastle midfielders. Keane with a fine tackle stopped Joelinton in full flow but the resulting counter by the Blues ran out of impetus as Newcastle funnelled back quickly to clog the midfield.

Into the final five minutes of the half and Doucoure conceded a free kick for a foul on Willock that Coleman defended well and full-blooded tackle by Gordon on Fraser again lifted the home crowd. A clear push on Doucoure by Burn went unpunished and just one added minute was announced allowing time for Gordon to win a late corner that was utterly wasted.

No changes in personnel by either manager for the start of the second half that saw Newcastle with the first shot, an effort by Willock falling nicely for Begovic off the legs of Allan. The game was delayed by about eight minutes thanks to a knucklehead ‘fan’ attaching himself to the Gwladys Street goalpost and an enormous pair of chain cutters produced that seemed to struggle before eventually doing the job and he was unceremoniously carted away as was another interloper by members of the local constabulary.

Goodison was imploring Everton to get forward but, Newcastle we’re looking increasingly solid and denying the Blues space and time before Allan fed Coleman for a cross that reached Gray but, his shot on the turn went wide. Richarlison saw the games first yellow card for backing into Burn and the free kick led to Fraser trying a shot from about 35 yards that Begovic dealt with easily. Everton were finding it difficult to work their way through a solid looking Newcastle and as Everton took a free kick, Richarlison went down off the ball with Schar spoken to by referee Pawson.

A free kick from Godfrey saw shots from Coleman and Gray blocked before Newcastle countered at pace only to be caught offside. The first change saw Almiron replaced by Saint-Maximin on 70 minutes, don’t forget there was going to be a substantial amount of added on time to come too.

Gray found Godfrey with a deep free kick and his header was hastily put behind for a right wing corner that Burn headed clear and as Everton came again, another deep cross, this time from Gordon was too strong for Gray to get on the end of.

Dominic Calvert-Lewin was the Blues first change, replacing Demarai Gray and getting the ball forward, Richarlison was flattened by Krafth who was rightly booked, the free kick from Gordon seeing his shot go for a corner off the Newcastle wall. Gordon won another corner as his unleashed a terrific shot that Dubravka managed to turn over the bar. The corner was punched away by the keeper and he easily held a cross back into the box from Doucoure.

Everton had found some second wind and urged on by the crowd, the temperature on the pitch was heating up and tempers close to fraying as Allan and Schar clashed. VAR called the referee over to the pitch side monitor and the outcome was a straight red card for Allan, who was livid at the decision and remonstrated all the way to the bench.

Andre Gomes was the Blues second change replacing Richarlison who trudged off, clearly aggrieved at having had his fellow Brazilian dismissed moments earlier. A deep cross found Joelinton and the half clearance from Doucoure gave Guimaraes the chance to bend a shot well wide of the far post. Begovic made a good stop to deny Willock as 14 added minutes were announced.

Anthony Gordon charging down the left channel gained the area and went down, under pressure from Krafth, referee Pawson didn’t even consider it having been a foul. Holgate with a good block cleared a shot from Joelinton and Begovic held on well to a cross from Saint-Maximin.

Newcastle were taking every opportunity to counter at pace as Everton tried to get forward but were stymied by the visitors who the Goodison crowd clearly thought were being assisted by the referee.

And Oh My God, Goodison went absolutely mental as two good tackles by Gomes and Coleman saw the ball reach Alex Iwobi who tried to play in DCL, the ball falling nicely for the former Arsenal man to slide home a super goal. The noise that greeted the goal was simply deafening.

It was all hands to the pumps now as Godfrey put a Saint-Maximin cross behind for a corner that Newcastle wasted and the noise level went up again as Anthony Gordon came off for Andros Townsend. Time was nearly up and Goodison bayed for the final whistle and Keane climbed to head a long ball from Dubravka to safety.

And the scenes that greeted that final whistle will live long in the memory of everyone in the Grand Old Lady this Thursday evening.