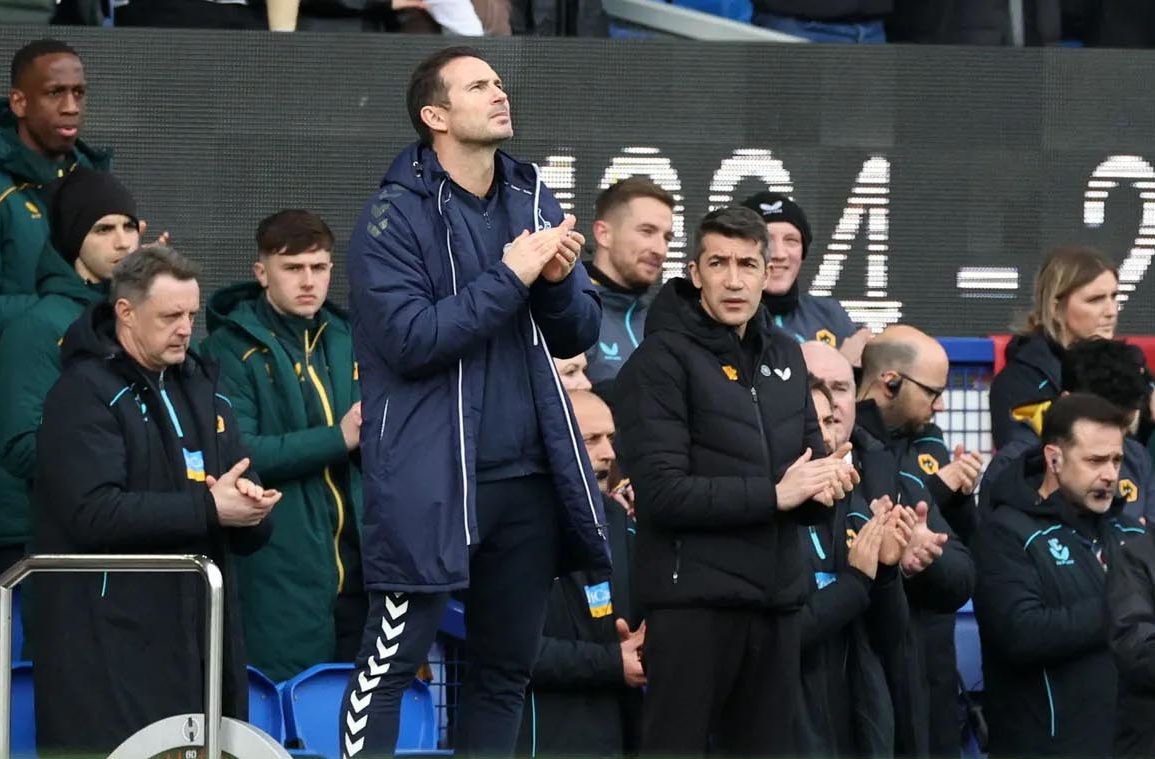 Blues crash to another loss with Kenny dismissed

A Conor Coady header inside three minutes of the second half condemned Everton to another loss and matters weren’t helped as Jonjoe Kenny was sent off for two yellow cards.

Following the embarrassing showing at Tottenham on Monday, Everton got some good fortune with the majority of the midweek fixtures with Norwich, Watford and Leeds all losing and with Burnley going down at Brentford on Saturday, the Blues took to the field against Wolves knowing that a victory would be a massive boost to everyone connected with the club – on and off the field.

For Frank Lampard, this week has been about repairing damaged egos and rekindling self-confidence after the mauling at White Hart Lane, and preparing his players for the fight to retain their Premier League status, something he acknowledged in his pre-match press briefing when he said, “I am ready for the fight and challenge and nothing coming here could surprise me. The fans will see that [fight] in the way we approach the game and perform on Sunday. I remain optimistic and confident about the team because I have belief in them, but the reality is we need results. We need to show the character and fight to stay in the league, as a base, and perform at a level to win games.” Lampard acknowledged too the part the home crowd can play when he added, “It has been a big pleasure of the job so far to experience Goodison, not just the support for myself; it gives the team energy and legs. We talk about mentality and personality, and clearly it’s given us a boost compared to our away form. We can’t rely on it [fervent backing] but, it will be there because of what this club means to the fans. They know they can be such a push and drive for us.”

And in team news for Wolves, Lampard was guarded as to the tactical approach but, did have soe good news to advise, “It won’t be a dramatic change of approach for Wolves. It will be an approach we see relevant for the opposition and maybe [there will be changes] as we have players available who haven’t been, and they are big players. Ben Godfrey is a big player for us and so is Demarai Gray. They are both fit. I haven’t really been able to call on them but now I can, and we need our big players.”

Managers don’t normally single players out but Lampard was keen to defend the under fire Michael Keane when he added, “Michael was suffering with a bit of a fever going into the Spurs game. The thing that people don’t see about that situation is that, whilst he was feeling below-par, we needed him and he played in the game. I remember doing that as a player myself. You don’t always get the plaudits and sometimes after the game you wish you hadn’t played. The beauty of it is he is dedicated and professional and he wanted to put himself out there. He suffered in the game and came off because he was suffering. He was still suffering for a couple of days afterwards but now he’s feeling better.”

Wolves under Bruno Lage have improved steadily after a poor start to the season and arrived at Goodison having thumped Watford in midweek to enhance their claims for a place in the Europe Conference next season – a performance and result he wants his side to build upon. “That’s the target. That’s the pressure I put on my players. I did a lot of pressure at half-time because I think at 3-0 you can sleep a little bit, not just us, also our fans, it was a quiet atmosphere and I think the players realised a bit, but I said I want to score more goals. We need to come, it’s not about result, it’s about the performance, when we don’t have the ball, we need to be aggressive, we need to play compact, we cannot give spaces for the opponent, and when we have the ball go there. 43 points should give us the confidence to play with the ball the way we want to play.”

For what promised to be another tense afternoon at the Grand Old Lady, our referee was Michael Oliver.

A good start by the Blues saw Richarlison hook a shot just wide in the opening minute and a nice turn by Anthony Gordon gave him a run and quick pass to Richarlison who was unceremoniously dumped by Coady.

Everton won two early corners that came to nothing and around the ten-minute mark, Wolves went into full theatrical mode with Hwang going down three times in five minutes despite receiving treatment and appearing okay to play on, and eventually leaving the game. Whether a deliberate ploy or not, it damaged the flow of the game, annoyed both the Everton players and the home crowd, and when Marcal went down, Coleman and Mountinho exchanged angry words.

More good work from Gordon saw him find Coleman for a cross that saw Sa deny Gray at close range for a corner that led to a shot from Ben Godfrey going wide of the target. Gordon was proving a major threat to Wolves and latching onto a loose ball, he left Saiss for dead to then cross low for Richarlison who was beaten to it by the alert Sa in the Wolves goal. Another nice move saw Richarlison release Gordon and he played a decent ball down the right channel for Coleman who was again denied by Sa.

When Wolves eventually tried to go forward, Podence who had come on for Hwang, wriggled free to try a shot that Holgate blocked and a couple of minutes later, Moutinho tried a shot that had neither enough power nor direction to unduly trouble Jordan Pickford. Holgate released Kenny and he found Gordon who turned inside and was fouled by Neves, the free kick seeing another corner won but again, fail to produce an effort on target.

Podence found Dendoncker in space on the right and his cross was put behind by Kenny and before the set piece could be taken, Coady went down claiming Pickford had punched him, referee Oliver ignoring the claims. A cross from Podence found Jimenez for a speculative overhead kick that flew high and wide before the Blues won another corner and three added minutes were signalled and they too produced nothing.

No changes for the second half that saw Wolves waste an early free kick on their right before winning another on the left that Richarlison headed clear but Wolves came again with Neves crossing for Coady to head the opening goal inside three minutes of the restart.

As Wolves began to knock the ball around, Doucoure was penalised for a foul on Neves and the free kick from Moutinho saw Jimenez put his close range effort wide of the near post. A good run and cross from Gordon momentarily caught Wolves out before Sa claimed the ball. Goodison was urging the Blues forward and another good cross from Gordon saw Richarlison head just wide albeit with the offside flag already raised against him.

Everton made their first change on 58 minutes with Dele Alli replacing Vitaliy Mykolenko meaning Jonjoe Kenny switched to left back with Seamus Coleman reverting to his accustomed right back role.

Wolves we’re now winning more and more possession and a strong run by .neves took him away from Doucoure before feeding Marcal who saw his low cross stopped and gathered by Pickford. Even with 25 minutes still to play, Everton were beginning to look devoid of ideas, only Anthony Gordon offering any real forward initiative.

Wolves wasted a corner and when Dele released Gordon down the right, Coady was back to block his low cross and clear to midfield. A nice interchange saw Dele release Richarlison who tried to jink around Sa before the offside flag went up again. A really nice break from Demarai Gray saw him feed Richarlison for a first time effort that went just wide and before the goal kick, Andros Townsend replaced Gray for the Blues second change.

Jonjoe Kenny saw the games first yellow card for a foul on Jonny with just over a quarter of an hour to play, and Goodison again raised its voice imploring the Blues to get forward with Kenny eventually firing over from distance.

And it got worse for Jonjoe Kenny on 78 minutes as a mistimed challenge on Jimenez saw his receive a second yellow card and the already difficult task of rescuing a point got harder for Everton reduced to ten men.

Ten minutes to play, could Everton find a way back into the game – it didn’t look like it as Wolves knocked the ball around with Neves shooting straight at Pickford. Trincao replaced Dendoncker for the final stages and Godfrey saw yellow for holding back the Wolves substitute. Everton were looking a beaten side, only a huge slice of luck or divine intervention seemed likely to save them from another crushing defeat.

Holgate to Gordon and his sweet turn took him away from his marker only for his excellent ball down the left for Dele to see another offside flag raised. Four added minutes were announced and the Blues won a late free kick just outside the Wolves area on the right that Townsend fired wide of the far post… and that was that.