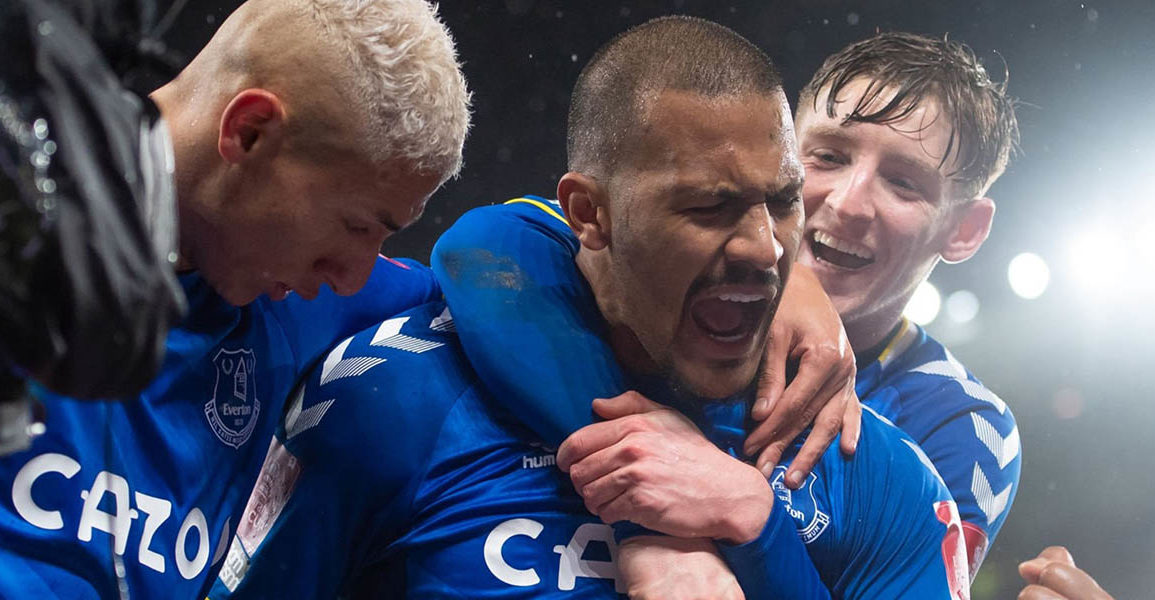 Not the powerhouse performance that many Blues craved on Thursday night as Boreham Wood proved to be stiff opposition but, two second half goals from Salomon Rondon were enough to see them reach the final eight.

Everton’s quest for FA Cup glory continued on Thursday night as Goodison played host to Boreham Wood of the National League, the fifth tier of English football. Everton reached this stage of the famous old competition with a resounds 4-1 disposal of Brentford while the visitors excelled themselves and all realistic dreams by eliminating Bournemouth of the Championship at the Vitality Stadium.

And with the quarterfinal draw having taken place in the pre-match build-up, both sides knew that the prize was an away tie at Selhurst Park against Patrick Viera’s Crystal Palace.

With injuries and loanee players ineligible to face Boreham Wood, Blues boss Frank Lampard outlined his selection issues, beginning by confirming, “Vitaliy [Mykolenko] will play tomorrow,” he revealed in Wednesday’s pre-match press conference. “That was a decision I made regardless of the outside situation – purely on a football decision. Of course, you have to be very aware of the life decision for him at the moment and he will play. We’ll see about any kind of gesture but, the fact is he’s starting the game and that’s the decision. I don’t want to answer those questions for him [whether or not football is helping at the moment], but it feels like the training and potential of playing is a relief. The conversations I’ve had – I’d rather keep private, because they are delicate.”

The boss confirmed that Dele Alli, Anwar El Ghazi and Donny van de Beek were cup tied and Academy graduate Tyler Onyango (hernia) is the only fresh injury concern ahead of the visit of the National League outfit. Dominic Calvert-Lewin will miss out with an adductor complaint that the Everton boss revealed ahead of Manchester City on Saturday would keep the England striker sidelined for “7-10 days.” And his options continue to be further limited as Ben Godfrey (hamstring), Yerry Mina (quadriceps tendon), Fabian Delph (thigh) and Tom Davies (hamstring) remain absent.

Lampard advised of the burning desire within Brazilian striker Richarlison to go all the way to Wembley when he said, “I was chatting football with Richy today and he was saying how desperate he is to play at Wembley and that is because of the history of the stadium. I was fortunate enough to play a lot at Wembley and it is a magical place. We are two games from doing that. There are some tough teams in the draw for the next round but that carrot is the one we’ll aim for.”

Boreham Wood boss Luke Garrard will not stop his players swapping shirts with Everton’s – because he has his eye on Frank Lampard’s matchday attire. “I’m taking Frank Lampard’s shirt off his back! His zippy, his ball. I’m getting everything,” Garrard said. “Seriously, though. This isn’t too much respect. We’ve done our analysis on them. So the respect’s there. Hugely. I’m not foolish in any way, shape, or form. They are unbelievable, absolutely unbelievable. These are international players playing week in week out the highest level. So trust me, there’s a huge respect. But we go there with a purpose, we go there with a job. And if we can implement our game plan, we will cause them problems. But we need to be lucky. And sometimes it’s better to be lucky than good.”

Garrard and Boreham Wood hope captain Mark Ricketts and Tony Hibbert fan Kane Smith will be available to play some part after injury however, defender Jamal Fyfield is less likely to feature after picking up a hamstring injury.

Our referee for this historic first meeting of the two clubs was Tony Harrington.

Rain was falling as the visitors kicked off and their first attack saw Marsh get free on the left and cross too strongly to the back post and out for a goal kick before the Blues first foray forward saw Townsend cross too far ahead of Rondon and the Boreham Wood keeper gathered easily. Everton worked the ball forward steadily and Patterson – making his debut – saw a low cross blocked and cleared.

A nice flick-on to himself by Rondon saw him get free and feed Doucoure who relayed it on to Mykolenko for a low shot that Ashby-Hammond punched clear, the Blues unable to create a meaningful second chance. Good approach work down the right from Townsend, Patterson and Kenny led to Allan playing a through ball for Doucoure, his shot on the turn going wide of the near post.

Raymond caught the ankle of Anthony Gordon as he looked to break through the middle, the free kick 22 yards out disappointingly saw Gordon hit the wall and as Everton came again, Rondon was caught offside as Ashby-Hammond palmed his powerful shot to safety. Patterson put Mendy uner pressure and won the games first corner kick and when Gordon danced into the area and fed Branthwaite, he pushed his close range effort wide of the near post.

Twenty minutes gone and whilst Everton were understandably having much the better of the possession, maybe an increase in the tempo of their play would put the visitors under greater pressure?

Stephens wrestled Rondon to the ground to concede another free kick to the right of the visitors penalty area that Townsend took and which was cleared far too easily. Goodison was quiet, maybe the majority of the full house crowd were expecting an easy passage past Boreham Wood however, as the half hour mark loomed, that was far from the case as the National League side were defending their not-having-conceded-a-goal record in the cup quite efficiently.

Begovic was decisive in coming off his line to claim a ball lifted into the Everton penalty area and when the Blues got forward again, Allan fed Gordon who cut inside off the left flank and fired a low shot that Ashby-Hammond parried well. Five minutes before the interval, play was held up as medical staff rushed acorss the pitch to attend to someone in the Lower Bullens seating. And from the restart Boreham Wood pushed forward with Smith finding Marsh in the Everton area, his cross dealt with by Begovic comfortably enough.

Gordon to Doucoure and onto Patterson but his cross was misdirected as two added minutes were announced. Mykolenko won a late corner that Gordon swung in, only to be easily cleared and at the interval, the visitors left the field to an ovation from their travelling support.

Frank Lampard made an attacking change for the second half, Richarlison coming on for Nathan Patterson and an early cross from Mykolenko had the Gwladys Street howling for a penalty even though the ball clearly was nowhere near the defenders arms. Mykolenko again getting forward crossed low into the six yard area where Rondon unable to reach the ball to poke it home. Everton had clearly upped the tempo and when Doucoure spread the ball right for Kenny, his fine cross was headed over the bar by Rondon.

A nice turn by Gordon saw him escape the attention of Ricketts but, the visitors defence got back in numbers to snuff out his charge forward. A poor ball from Branthwaite gifted Marsh the chance to try a speculative shot that thankfully sailed over the bar. Finally on 56 minutes, Everton worked an opening as Allan played the ball wide for Jonjoe Kenny to cross low and Salomon Rondon was quick to nip in at the near post and slide the ball home.

Two minutes Vitaliy Mykolenko went down and immediately signalled to the bench and Seamus Coleman was the quick change by Frank Lampard. Everton looked brighter now and Gordon bursting into the area tested Ashby-Hammond at his near post. Townsend with a deep cross from the right found Gordon and with Everton having plenty of bodies forward, Boreham Wood closed ranks and defended the threat really well.

A nice give and go between Gordon and Richarlison saw Gordon win another corner off the legs of Ashby-Hammond, the set piece easily cleared again by the National League side. With Coleman at right back, Kenny switched to the left and fed Gordon who blazed a shot over the bar before Boreham Wood replaced Ricketts with Comley for the final twenty minutes plus added-on time.

Everton thought they had doubled their lead somewhat fortuitously when Kenny found Gordon, and he cut inside to shoot and his effort cannoned off a defender and onto Richarlison – VAR determining that the ball had hit his arm.

Tony Hibbert fan Kane Smith was a 73rd minute change for the visitors as an ankle injury forced him off to be replaced by Smith. Gordon was still proving to be the most active forward for the Blues as he again cut in off the left flank to test Ashby-Hamond with a low shot, and a minute later, the Boreham Wood keeper made an excellent save, low to his left to deny Richarlison at the expense of a corner that eventually saw Evans head behind for another Blues corner, Allan nearly seeing his shot hit the Upper Gwladys seats.

Into the final quarter of an hour and Everton in search of a clinching goal again failed to find a quality finish as Gordon lifted another effort over the bar. Nice interplay by the Blues saw them create an opening for Richarlison, Rees perfectly timing his challenge at the expense of a corner that saw the Townsend cross come to the back post where Salomon Rondon climbed well to power his header over the line despite the despairing effort of Ashby-Hammond to keep it out.

Lewis Dobbin got the last five minutes as Anthony Gordon left the field to a warm round of applause. A foul on Coleman gave time for Everton to give debuts to Isaac Welsh and Reece Welsh replacing Michael Keane and Allan respectively before Richarlison curled the free kick wide of the target.

Three added minutes were announced and Everton ran down the clock to secure their passage into the quarterfinal where they’ll face much tougher opposition in Crystal Palace at Selhurst Park.