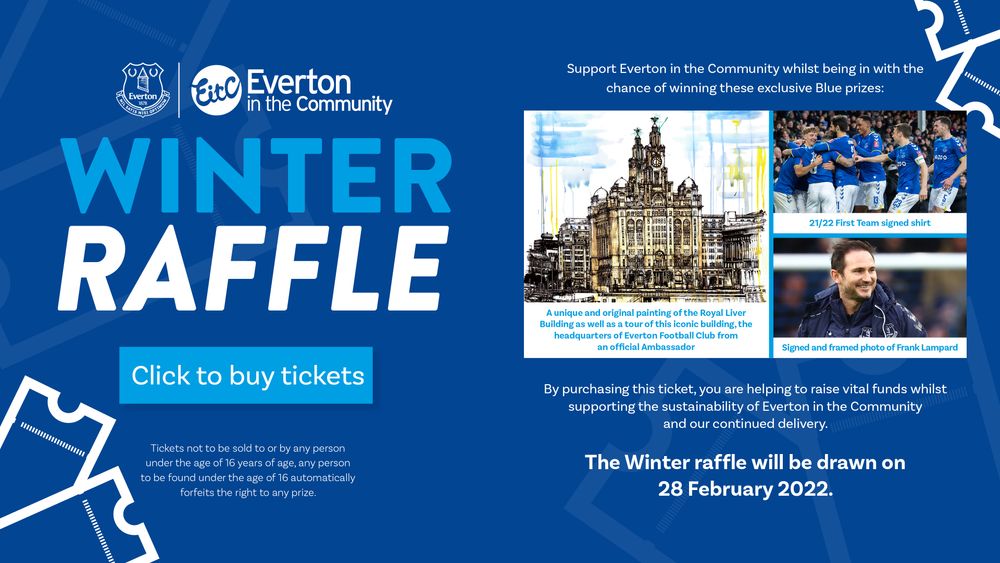 Everton in the Community Raffle

The Everton in the Community online raffle is back with a whole host of prizes up for grabs, including an exclusive piece of art from an iconic Liverpool landmark.

Supporters can be in with the chance of taking home a fantastic depiction of the Royal Liver Building, part of the city’s famous skyline, and one of the UK’s most recognised buildings.

Since 1988, Everton in the Community’s 40+ programmes tackle the deepest-rooted societal issues at the heart of communities across Merseyside.

Everton in the Community supports the most vulnerable and underprivileged members of local communities, and the charity aims to instil confidence in others by creating life-changing opportunities. Thousands of people have already benefited from the magnificent work the charity does.

The painting, which captures perfectly the stunning landscape of RLB was commissioned anonymously by renowned architectural artist Jessica Louise Rock and took a period of four months to complete. The winning supporter will not only take home the original painting, but will also receive a free tour of the Royal Liver Building, the headquarters of Everton Football Club from an official Ambassador.

It costs just £5 to enter and there is no limit to how many tickets a supporter can purchase before the winning entries will be drawn on Monday 28 February.

Other prizes include this season’s first team signed shirt, as well as a signed and framed photo of Frank Lampard.

All funds raised from the online raffle will be channelled into Everton’s official charity, Everton in the Community to help support its vital services to the L4 community and beyond.

*Please note that prizes cannot be exchanged for another prize.