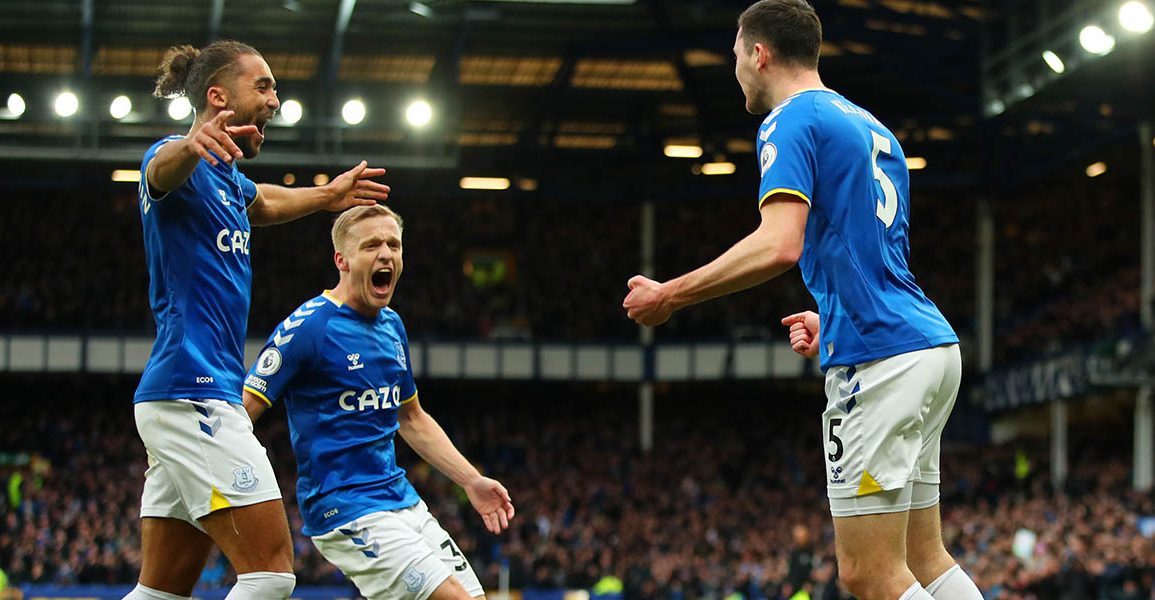 Everton eased their relegation worries with a blistering first half showing that saw goals from captain Seamus Coleman and Michael Keane all but blow Leeds away, and a superb solo effort from Richarlison in the final quarter capped a terrific performance.

A huge game for Everton Football Club, following the disappointment at St.James’s Park, saw the visit of Leeds United to Goodison on a day when Evertonians everywhere were implored to give of their very, very best in support of Frank Lampard and the Boys in the Royal Blue.

The new managers cause wasn’t exactly helped by a lengthening list of players not available for selection as he confirmed in his pre-match press briefing. Frank Lampard did however have some encouraging news as he confirmed, “Dominic Calvert-Lewin is in the squad, he’s been working all week with us and we’ll decide tomorrow.”

He added, “Yerry Mina has an unfortunate quad injury that will be probably between eight to ten weeks and Demarai Gray won’t be fit for Leeds but, hopefully it’s just a minor knock around his hip and we’re hoping he’ll be fit for next week.”

With Ben Godfrey and Vitaliy Mykolenko also out of contention, the boss was asked if this would need a change in his defensive thinking and he responded, “we’ve got options. They’re two big injuries for us at centre back but, we do have options there who have to step up – Michael Keane, Mason Holgate and Jarrad Branthwaite. I can’t deny that options are becoming tight as you always want to have a full squad, especially when you’re in the position we’re in.”

While Everton came unstuck on Tyneside on Tuesday, Leeds fared better at Villa Park on Wednesday recovering from a 3-1 deficit to earn a valuable point to take then four clear of the Blues in the nether regions of the Premier League table.

Suitably encouraged by his sides fight back, Leeds boss Marcelo Bielsa began his Friday preview by confirming, “Patrick Bamford, Kelvin Phillips, Liam Cooper and Junior Firpo, like the game against Aston Villa, won’t be considered against Everton. Firpo is healthy but, he will return next weekend. Phillips is expected back early next month, his recovery has been going as predicted.”

Turning his attention to the Goodison clash, the Argentinian commented, “we’re thinking of this game, of course there are a series of games that come after which are very difficult but, we are fundamentally focusing on this game. It’s very difficult to predict what is going to happen in a game of football, it depends entirely on things that are verified on the pitch.”

Last season saw the sides both win their respective road trips, while this seasons early encounter at Elland Road ended in a draw and with both sides lower in the table than they would like to be, Bielsa selected this starting line-up to face the Blues: Meslier, Ayling (c), Lorentz, Struijk, Dallas, Koch, Raphinha, Rodrigo, Klich, Harrison and James.

Our referee on a cool and breezy afternoon was Graham Scott.

A rip-roaring start to the game from Everton saw them straight on the front foot and the first chance saw Llorente do just enough to deny Anthony Gordon a clean shot after Allan had won the ball in midfield and found DCL to set up the Blues wingman. Goodison was loud, the crowd clearly up for the game and so were the team who pinned Leeds back in their own half. Allan and van de Beek combined to send Gordon in for another shot that Meslier gathered easily.

An early change for Leeds on seven minutes as Hjelde replaced Dallas who limped off ahead of Kenny scampering down the left to cross just too high for DCL. Everton kept up their quick start and on ten minutes, the pressure paid off as Seamus Coleman arrived late into the area to crash the ball home on ten minutes, a lead thoroughly deserved.

Allan, van de Beek and Gordon were all shining in this blistering start with Richarlison and Alex Iwobi also working hard to impress the manager. Klich with a through ball for Raphinha saw Holgate time his tackle perfectly before Rodrigo rattled the Everton crossbar with a shot from about 25 yards. Richarlison took a knock in the Leeds area but, was okay to carry on and indeed it was his pressure that won the games first corner. Anthony Gordon swung it in and Michael Keane rose like a salmon to crash an unstoppable header into the net for two nil on 22 minutes. Goodison was now double loud !!

Holgate was felled by an accidental high boot from Raphinha but, to his credit didn’t feign injury and there was no booking. Good work again by Kenny marauding down the left created another shooting chance for Gordon and Leeds countered through Harrison and Ayling to win their first corner that Richarlison headed clear and taking a ball from Gordon looked to break away only to be hauled down by James who was rightly booked.

Richarlison was harshly adjudged a foul that stopped another Everton attack from developing before he and Gordon combined yet again with the cross just too far ahead of DCL. Van de Beek to Allan and onto Iwobi and he saw his right footed shot go narrowly wide as the Blues continued to dominate.

Another flowing move involving Richarlison, Allan and van de Beek saw Meslier push a shot from DCL away for a corner that was wasted and Everton cleared a Leeds corner won on their breakout.

A great ball from Iwobi hit DCL on the back of his head as he looked to get away from Struijk, and another decent move ended with Kenny over hitting his cross.

Two added minutes were announced and Rodrigo for the second time rattled the Everton crossbar with a shot from just outside the area… and Everton went to half time break with applause ringing around the Grand Old Lady.

Leeds made a double change for the start of the second half, Forshaw and Roberts replacing Klich and Raphinha respectively.

Everton went looking to get an early goal in the second half and DCL was unlucky not to find Richarlison with a ball off the outside of his right foot. And when Leeds tried to get out on a long ball aimed at Roberts, Jordan Pickford was alert and quick off his line to clear the danger. To their credit, Leeds began to get forward and won a corner that Everton eventually cleared and Alex Iwobi won a free kick that allowed Donny van de Beek to receive some treatment for a knock.

Mason Holgate sportingly put the ball into touch so Roberts could receive some treatment and on the restart, Leeds got the ball into the Everton area where James came off second best from a collision with Pickford. An hour gone and whilst Leeds were seeing slightly more of the ball, Everton were still very good value for the first half lead. Seamus Coleman had objects thrown at him from the visiting support as he was taking a throw in but again, didn’t make a meal of it.

The Goodison crowd had, from the first minute, adopted the latinesque booing of the opposition when they had possession of the ball and it seemed to unsettle the visitors who were struggling to put together any real cohesion and fluidity in their play. Good work by Kenny and Iwobi worked the ball right for Gordon who saw his cross partially blocked and easily gathered by Meslier.

Goodison roared its approval again as another Leeds move broke down in their own half and again as Coleman easily disposed Harrison and set Iwobi free down the right flank, D CL not making the most of the ball when he received it. Rodrigo fired over from distance as Leeds began to look a bit desperate.

Everton made their first change on 71 minutes as Dele Alli replaced Dominic Calvert-Lewin.

Kenny cutting in off the left fired a shot that was blocked and Iwobi couldn’t quite turn away from Struijk to get a close range shot in. And Everton put the result beyond doubt in the 78th minute as Richarlison decided to go it alone and capped his own excellent showing with an excellent low shot that Meslier simply couldn’t reach.

With ten minutes to go, Goodison rose to its feet to give a thoroughly deserved standing ovation to Anthony Gordon as he came off and Anwar El Ghazi made his home debut… Frank Lampard giving Gordon a huge hug as he left the pitch.

With the game over as a contest, it was doubly impressive to see the effort of every player continuing unabated, closing Leeds down, making tackles and completely dominating the opposition. With five minutes to go, Richarlison got his standing ovation as Salomon Rondon got the cameo substitute appearance, again, the embrace from manager Frank Lampard well deserved and reciprocated.

As three added on minutes were announced, Dele played a one-two with Alex Iwobi and his first time cross was met by Rondon, Meslier with a fine save preventing a fourth Blues marker. A delay while Hjelde received treatment merely prolonged the agony for Leeds as Goodison acclaimed Frank Lampard and he reciprocated in applauding all four sides of the ground.

Picking a Man of the Match won’t be easy as every player in the Royal Blue contributed but, shout outs for Anthony Gordon, Donny van de Beek and the tireless Brazilian duo of Allan and Richarlison.