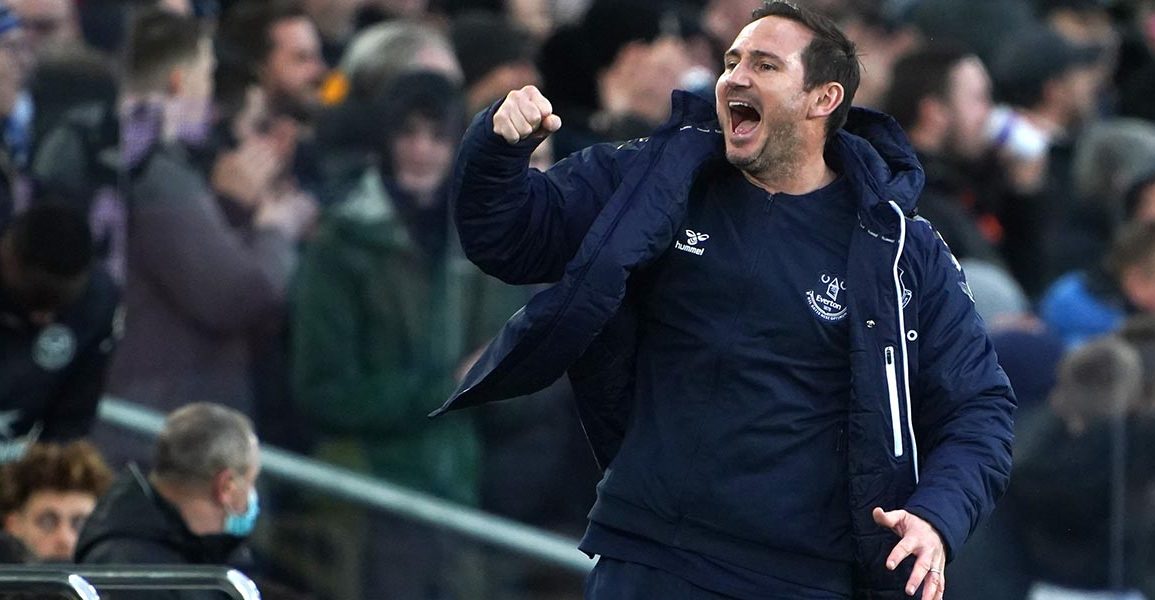 Frank Lampard got off to the perfect start with a win and progression into the fifth round draw of the FA Cup. A first half header from Yerry Mina and second half strikes from Richarlison, Mason Holgate and an added on time blast from Andros Townsend proved too much for Brentford as they were swept away.

Out with the old and in with the new and Goodison Park was delighted to welcome the new manager of Everton Football Club as four-time FA Cup winner Frank Lampard stepped onto the hallowed turf to take rapturous applause ahead of this cup tie against Brentford.

It’s been something of a whirlwind ten days with the arrival of arguably the best attacking midfielder of the Premier League era to his third managerial challenge, and the assembly of a largely new backroom staff, including Joe Edwards, Paul Clement, Chris Jones and the managers former team-mate at Chelsea, Ashley Cole.

Throw in some busy and innovative transfer market activity that saw the arrival of Dutch midfielder Donny van de Beek on loan from Manchester United and England midfielder Dele Ali from Tottenham Hotspur – although both are cup-tied and unavailable for today’s game – and you have an idea of the frenetic nature of the early days of the Lampard era.

Speaking his first set of programme notes, Lampard expressed his delight with the staff he’s brought to the club noting, “Joe Edwards was my assistant at Chelsea, a fantastic coach with a wide range of skills to get us where we want to be. I worked with Chris Jones as a player and was part of my coaching team at both Derby and Chelsea. Paul Clement is experienced, understands football and footballers, and is a winner. Ashley Cole needs little introduction, one of the best I played with and going the same way as a coach. Ash is bright, imaginative and enthusiastic and really wanted to come to Everton.”

His first team selection presented an early challenge as knowing in advance that Abdoulaye Doucoure, Fabian Delph and Tom Davies were all unavailable, he advised his first pre-game press briefing, “Dominic Calvert-Lewin picked up a small knock in the last game, so won’t be available this weekend. We hope he can back in training in the next few days and ready for the games coming up.” He expanded adding, “We have some players who are cup-tied but other than that, we are in pretty good shape, I’m happy with where we are at.”

With Yerry Mina, Salomon Rondon and Alex Iwobi all back from international duty, Frank Lampard still had a large squad to select from and with eyes clearly on the prize of progression in a competition he has a rich history in, he named his first Everton starting eleven: Pickford, Coleman (c), Holgate, Keane, Godfrey, Mykolenko, Gomes, Allan, Gordon, Gray and Richarlison.

The visitors, Brentford, were dealt a bit of blow in their preparation as boss Thomas Frank tested positive for Covid-19 last weekend and was due to tested again on Friday to determine whether he could take charge of the Bees in person.

Brentford made headlines too this week in signing Danish international Christian Eriksen and whilst he too won’t feature in today’s game, every football fan will wish him a successful return to the game following his cardiac arrest against Finland in the European Championship last year.

Addressing his media gathering Bees boss Thomas Frank advised that his other January window signings, midfielder Josh Dasilva and goalie David Raya, “both played around 65 minutes on Tuesday and are available. We will put a very strong team out as we want to perform well in the Cup and the Premier League. We haven’t had a match for a couple of weeks so, there’s no reason we can’t put a strong team out.”

And on facing Frank Lampard on his Goodison debut, Frank added, “we are preparing by watching his Chelsea games. He will try to put his stamp on it from day one, definitely play more aggressively and more high pressing. I expect them to come in a 4-3-3; that’s what he did at Chelsea. It is very difficult to prepare for it, at home I expect them to come flying at us, they need to prove to Frank that they want to play and get into his team.”

With Goodison packed to the rafters and, to say the least, raucous for the entrance of Frank Lampard, Michael Oliver was tasked with the refereeing duties.

An energetic, high tempo start by the Blues saw lots of quick passing and movement off the ball as they looked to get at the visitors. Brentford spent five minutes defending their own half before their first foray forward won a corner that produced nothing.

A nice move begun by Gomes saw a number of crisp passes and the ball eventually going wide left for Mykolenko to find Allan and onto Richarlison who saw his low shot go just wide of the far post. Brentford had a lucky escape after a poor clearance by Raya before, on eleven minutes Ben Godfrey pulled up and needed to be helped from the pitch. He was immediately substituted by Yerry Mina with Mason Holgate switching from the right side of the defence to the left.

A long ball from Mina saw Gordon and Richarlison hurry Sorensen with the ball falling for Gordon, his cross though failed to find Richarlison. Brentford, despite having little of the ball we’re holding up well with neither goalie tested in the opening twenty minutes.

On 23 minutes, Andre Gomes was booked for a pull on Toney, hardly worthy of a yellow card and then the best move of the half so far saw Allan and Gray combine to find Gordon who cut in off the right wing to curl a shot just over the bar from twenty yards.

Mina to Allan and Gray again worked an opening for a cross that was cleared and then a really patient build-up saw Gomes fire in a 25 yard effort that Raya partied behind for the Blues first corner on the half hour mark. Gray swung it into the six yard area where Yerry Mina rose like a stag in the mating season to power his header into the Park End goal.

Another decent move begun by Mykolenko and involving Allan, Gomes and Gray saw Richarlison disappointingly shoot over the bar, before a very patient attack by Brentford down their right led to Pickford acrobatically turning a shot from Canos away fro a corner.

Everton, with Frank Lampard clearly encouraging them from the touch line, were playing some nice, one touch football, really good to see. Gray on a burst through the middle with Richarlison to his left and Gordon to his right, chose the shot and spooned it over the bar.

Two added minutes saw Brentford waste another corner and the Blues deservedly led at the break.

No changes by either manager for the second half and the Blues took just under three minutes to double their lead as Keane found Allan and his through ball saw Richarlison beat the onrushing Raya to the ball and find the unguarded net.

Brentford tried to hit back quickly with Toney firing a low cross through the Everton penalty area, and they were awarded a penalty on 52 minutes as Pickford brought down Toney. The Brentford striker picked himself up and sent JP the wrong way to halve the deficit.

With Jensen down holding his back, Everton played on with the referees encouragement and won a corner that Gray swung to back post where Raya gathered rather too easily. Brentford went straight down the other end and won a right wing corner of their own that Holgate headed clear and Pickford gathering a follow-up cross ahead of Toney. Everton countered quickly with Gordon finding Gray and his shot was blocked and put behind for a corner that saw the Blurs restore the two goal advantage, Mason Holgate with a close range header to set Goodison roaring on 61 minutes.

Goodison was now baying for more and with chants of ‘Super Frankie Lampard’ rolling around the Grand Old Lady, the new manager applauded in recognition of the new-found adulation.

Yerry Mina was booked for impeding Toney as Brentford looked to break out of defence, the visitors manfully trying to get back into the game but, coming up against an Everton side in a determined mood.

Into the final twenty minutes and both sides a double change, Andros Townsend and Jonjoe Kenny replacing Anthony Gordon and Vitaliy Mykolenko respectively while Brentford sent on Ghoddos and Dasilva for Canos and Roerslev.

Everton were still pushing forward with Townsend and Richarlison seeing shots blocked while Brentford won a right wing corner as Holgate put a cross from Ajmer behind, and which Everton defended well. Into the final ten minutes and Everton were looking comfortable, and forcing the visitors into hit ‘n hope attacks. Mina was caught by Toney and while he rolled around, Brentford made their third change, Stevens replacing Henry.

With rain tumbling from the skies and swirling around in the stiff breeze, Everton were still knocking the ball around with an air of confidence not seen at Goodison for a good while. The new manager gave late cameo roles for Cenk Tosun and Alex Iwobi, replacing Richarlison and Demarai Gray respectively on 87 minutes.

Good work by Mina and Gomes, looking more like the Andre Gomes who first arrived at Everton, worked the ball away from danger and four added minutes were announced and the Blues capped an excellent afternoon with Andros Townsend firing home from twenty yards.