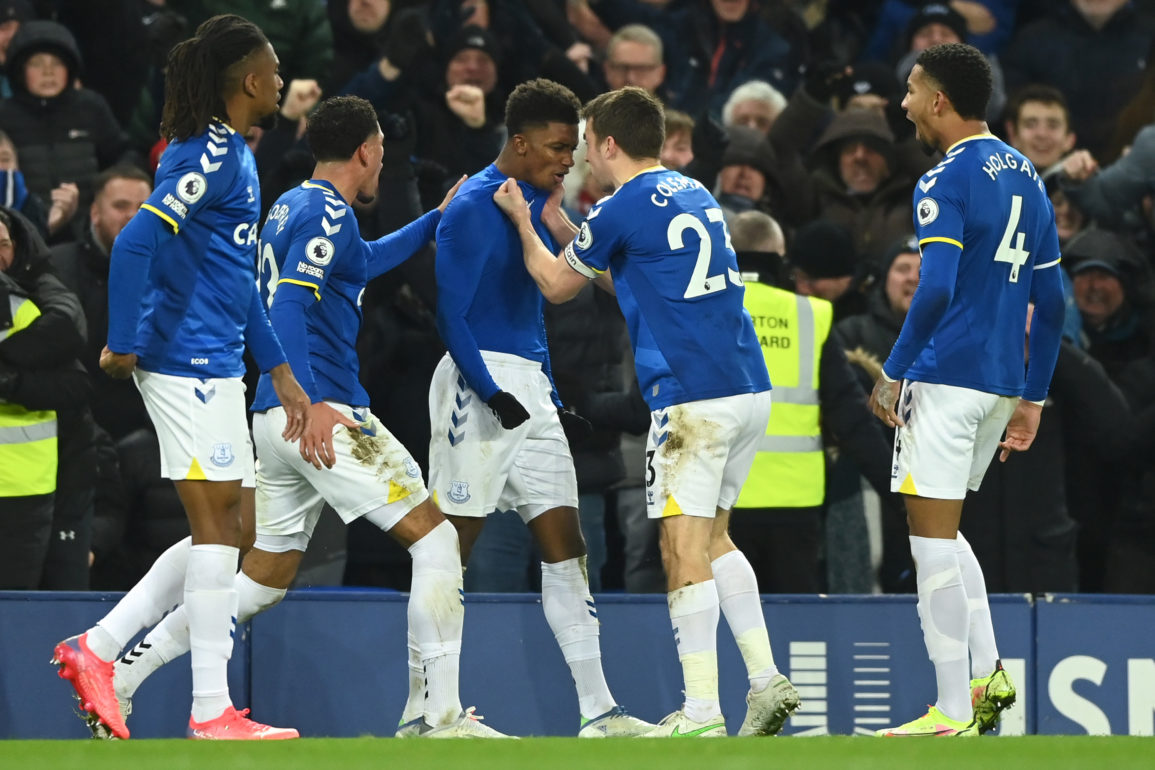 Welcome to 2022 and our first Player of the Month article of the New Year relates to the Covid/injury affected month of December. Originally scheduled to feature no fewer than seven fixtures, the diary was cut short and in effect gave Everton – and others – an unscheduled mid-season break as the games cancelled will need to be slotted into the calendar in the weeks and months ahead.

December always looked to be a tough month when the fixtures were first announced and even without the postponements, the four games played proved to be a mixture of ecstasy and agony, and it began with a huge helping of agony as them from across the park cruised to a Wednesday evening ‘derby’ victory with decent first half strike from Demarai Gray providing a rare moment of pleasure in a 1-4 reversal.

The following Monday evening saw an improving Arsenal tip up at the Grand Old Lady and the agony was replaced by a late and much needed tsunami of ecstasy as the Blues came from behind to win in added-on time with another dramatic and simply stunning strike from Demarai Gray. The night though belonged to Richarlison who having had two ‘goals’ disallowed simply rolled his sleeves up and reaped his reward with a thoroughly deserved equaliser and provide the impetus for the game to be won… and how it was won!

Boosted by the victory over the Gunners, Everton travelled next to Selhurst Park and failed somewhat miserably to maintain their decent record over Crystal Palace, with Salomon Rondon bundling home his first goal for the club in a game dominated by the on-loan from Chelsea Conor Gallagher.

And it was to Chelsea that the Blues travelled next with a squad seriously depleted and with many Blues and all the pundits expecting a convincing win for the home side. Everton though with JonJoe Kenny at right back, Jarrad Branthwaite at left back and Ellis Simms getting his Premier League debut went about their work with a cohesion and belief that hasn’t been seen as often as we’d like to that point. Chelsea, as expected, dominated the possession but, Everton defended superbly and backstopped by a Jordan Pickford in determined mood kept the home side at bay. Chelsea looked to be running short of ideas but, the pressure eventually tolled and Mount pierced the Blues defence for the lead. Many teams would have dropped their heads and fallen apart however, Everton dug in and barely five minutes after going behind drew level. Anthony Gordon, who’d had an excellent game, took a free kick he’d won and curled a peach of a cross to the back post where the super-cool defending of Jarrad Branthwaite morphed into super-cool finishing and the travelling Evertonians roared their approval. At the final whistle, with Lewis Dobbin also having had an impressive 28 minutes after replacing Simms, Everton were extremely good value for their hard-earned point.

The four games played produced one thrilling win, one tremendous draw and two defeats we’d rather forget before the Covid/injury postponements brought the month to an early conclusion. Such was the extent of the Everton injury situation and managerial decisions, that no fewer than 24 players were used in the course of those four games with only five appearing in all four and only four – Jordan Pickford, Michael Keane, Abdoulaye Doucoure and Ben Godfrey – playing every minute available.

And so to the Man of the Match polls and the four games saw four different individual poll winners. The ‘derby’ poll saw Demarai Gray secure a huge win and he might have made it two on the bounce for his goal against Arsenal but, Richarlison with his unrewarded ‘hat-trick’ earned an absolute deluge of votes to romp away with that poll. Ben Godfrey with some lung-bursting runs and resolute tackling was a clear winner of the loss at Palace poll and that led to England’s #1, Jordan Pickford being a comfortable and deserved winner at Chelsea with notable polling numbers for both Anthony Gordon and the impressive Jarrad Branthwaite.

With the monthly round-up done and the other formalities dealt with, polling numbers checked and double checked, it’s time to reveal our top three players for December – and remember, it’s your votes that put them there.

In third place and maintaining a podium place from last month is… Jordan Pickford.

And that leaves our winner with over 25% of the total votes polled and the GrandOldTeam.com Player of the Month for December, the congratulations go to our blond-haired Brazilian belter – Richarlison.