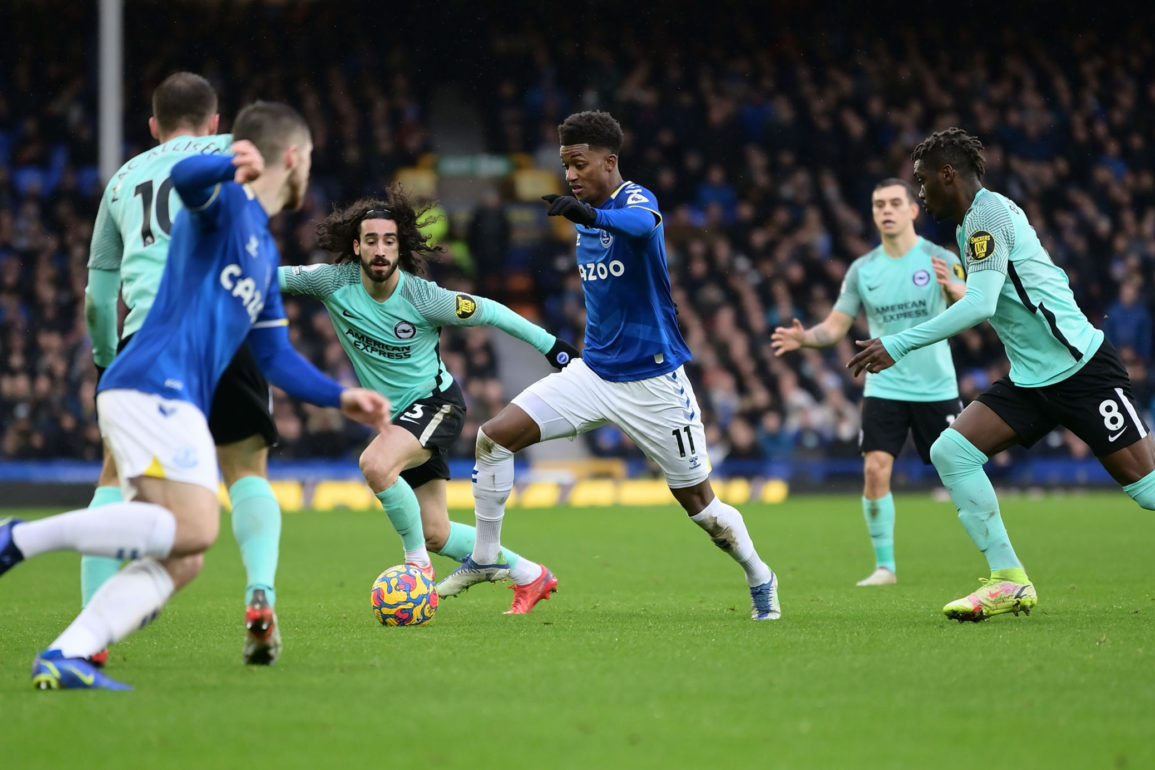 Gordon double not enough to rescue a point

Everton began the new calendar year with a shocking first 45 minutes, saw Anthony Gordon continue to impress in bagging a second half brace but, ultimately it wasn’t enough as Brighton ended their Goodison hoodoo with a first ever win at the Grand Old Lady.

Having had three games postponed due to Covid, Everton were keen to get back first team action with their opening game of the New Year, with Graham Potters Brighton the first visitors to Goodison in 2022.

With the much rumoured and worst kept secret signing of Ukrainian international left back Vitaliy Mykolenko confirmed on New Years Day, his arrival was seen as a potential new dawn as well as signalling the possible departure of French international Lucas Digne. Mykolenko was ineligible to face Brighton and with Digne rumoured to be out of favour with manager Benitez, speculation centred around the back four that defended so well against Chelsea continuing against the visitors.

In his pre-match media briefing, the manager began by outlining his squad availability situation is improving when he noted, “We are getting better, obviously we had issues with COVID and these players that have had problems are coming back and have been training, so we are much better.” He continued, “We cannot give names, we cannot give numbers but in terms of COVID, we have less problems. In terms of injuries, we are also bringing players back – still, we have some issues, but we are much better now. We have enough players and we want to play. When you cannot, you cannot – but when you have the possibility to play, we try to play.”

Asked specifically about Dominic Calvert-Lewis and whether he might feature against the Seagulls Benitez commented, “Dominic is training with the team. I’ve explained before that one thing is match fitness that you can improve by playing games and the other thing is fitness. Fitness-wise he is getting better… Match-fitness, we will see. Maybe he scores three goals in the first half and we don’t need to worry about his match fitness but I think the issue will be how long he can play if he starts the game or, if he comes from the bench, how much impact he can have on the game. We are considering all of these things but he is training really well and he is really happy because he is with the team and is ready to play and score goals.”

Brighton have enjoyed a decent first half of the season, rising to tenth in the table and being three points better off than the same stage in their Premier League history. A Boxing Day victory over Brentford was followed up with a last-gasp equaliser from Danny Welbeck to earn a draw at Chelsea and a first ever win at Goodison would lift them to the lofty heights of eighth if it came to pass.

Commenting on his squad situation, Seagulls boss Graham Potter confirmed captain Lewis Dunk would miss the Goodison game and that Leandro Trossard was likely to return having missed the Chelsea trip when he advised, “Leandro has trained today [Friday] so that’s good news. It was more fatigue with him and he was taken off as a precaution with the quick turnaround in games. The Covid situation is fine, touch wood. At the moment we’re in a good place.”

Our referee on a damp yet unseasonably mild afternoon was John Brooks.

With manager Benitez lining the defence up somewhat disjointedly with Coleman on the left ahead of Holgate and Kenny on the right ahead of Godfrey, it really didn’t come as any great surprise to watch Brighton carve open the defence through Trossard and Cucurella on their left lofting the back in to Maupay and his deft header falling perfectly for MacAllister to put the visitors ahead inside three minutes.

Kenny saw yellow for his first tackle, a decision that didn’t endear the referee to the home crowd and the next Brighton raid again cut far too easily through the Everton midfield with Holgate eventually blocking a shot from Trossard. Anthony Gordon was a tad fortunate not to see yellow for a mistimed tackle on Mwepu ahead of a bit better from Everton as Kenny played Gray into space on the right for a cross that was too strong and found Coleman on the left, he tried two crosses as Allan and Doucoure joined the attack but, Brighton weathered the brief Blues pressure.

Bissouma clattered into Gray and escaped a booking and then got forward at pace to gain the Everton area, check and win a corner off Allan. And the corner made it 0-2 as it was flicked on at the near post by Maupay and Burn arriving unmarked buried a close range header.

Everton tried to hit back with Allan and Gray getting forward to find Gordon who got flattened, no foul the referees decision and the ball going out for a Brighton goal kick. Everton demanded the fouls on Gordon be checked, VAR reviewed and the penalty was awarded only for DCL to blaze the spot kick into the Park End seating.

Very, very little was going right for Everton against a well drilled Brighton who looked much more composed, combative and with way more ideas of how to break down their opponents. More poor defending led to a Lallana shot from twenty yards that Pickford pushed around the post. Everton defended two corners and a quick ball from Pickford found Gray who played it inside for Gordon to collect, jink past two defenders but fail to find the power in his shot to trouble Sanchez.

Into final minutes of the half, Trossard again made the most of poor defending to shoot just over the bar with Pickford clearly angry at the lack of protection he was being afforded.

At least the rain had now abated but trailing by two and after a frankly dreadful first half, Everton had something of a mountain to climb in the second half if they were to claw a way back and rescue something from the game.
Gray, found by Coleman, put a low cross in towards DCL, Brighton conceding a corner that saw Gray cross towards Doucoure and the ball fall nicely for Sanchez to gather. Everton finally got a slice of luck as after Allan found Anthony Gordon wide right, he cut inside feinted a shot and then did shoot, his effort taking a big deflection off a defender to completely wrong foot Sanchez on 51 minutes.

Coleman and Gray again combined for the latter to cross towards Gordon who went down in the area with shouts for a VAR review for a penalty proving fruitless. From the resulting corner, Gray blasted in a shot that Sanchez couldn’t hold and Brighton scrambled the ball away. There was a lot more urgency now about Everton and the Goodison crowd responded, urging them on.

Kenny with a crunching challenge on Cucurella stopped a Brighton attack on the edge of the Everton penalty area. Duffy and Lamptey were the first changes for Brighton replacing Veltman and Lallana on 61 minutes.

Gray was brought down wide left and the resulting free kick saw Coleman slice a shot horribly wide of the target. Brighton had managed to recover their composure somewhat however Everton were enjoying more of the ball to win and then waste a corner from the right.

Gray found by Allan returned the ball inside and the Brazilian midfielder smashed a terrific shot towards the top corner, a flying save by Sanchez tipping it over for a corner the visitors defended. The much maligned Holgate did excellently to match Maupay for pace and win the ball however, his effort wasn’t matched by other and with just under twenty minutes to play, Brighton stunned Goodison with a crunching third strike from MacAllister

The emergence of Salomon Rondon onto the touch line heralded a chorus of boos from sections of the crowd. But before he came on to replace JonJoe Kenny, the right back had scampered down the wing and crossed for Anthony Gordon to neatly fire home his second of the game and breathe fresh life into Everton.

Godfrey won the ball in midfield and surged forward with Gray in support to win a corner, Brighton replaced Trossard with Moder, and the corner came to nothing. Into the final ten minutes and the game was still delicately poised and loud appeals for a foul on Rondon fell on dear ears.

Andre Gomes replaced Allan with a little under four minutes plus any added on time to play and a long ball from Pickford found its way through to Rondon who crossed for Gordon who poked his close range effort the wrong side of the near post.
A corner came out to Gomes whose cross picked out Rondon, the Venezuelan striking a first time volley over the crossbar ahead of four added minutes being announced. Time was very definitely running out for Everton who, it has to be said had battled hard after that calamitous first half, and it was the travelling Brighton fans who celebrated the final whistle.