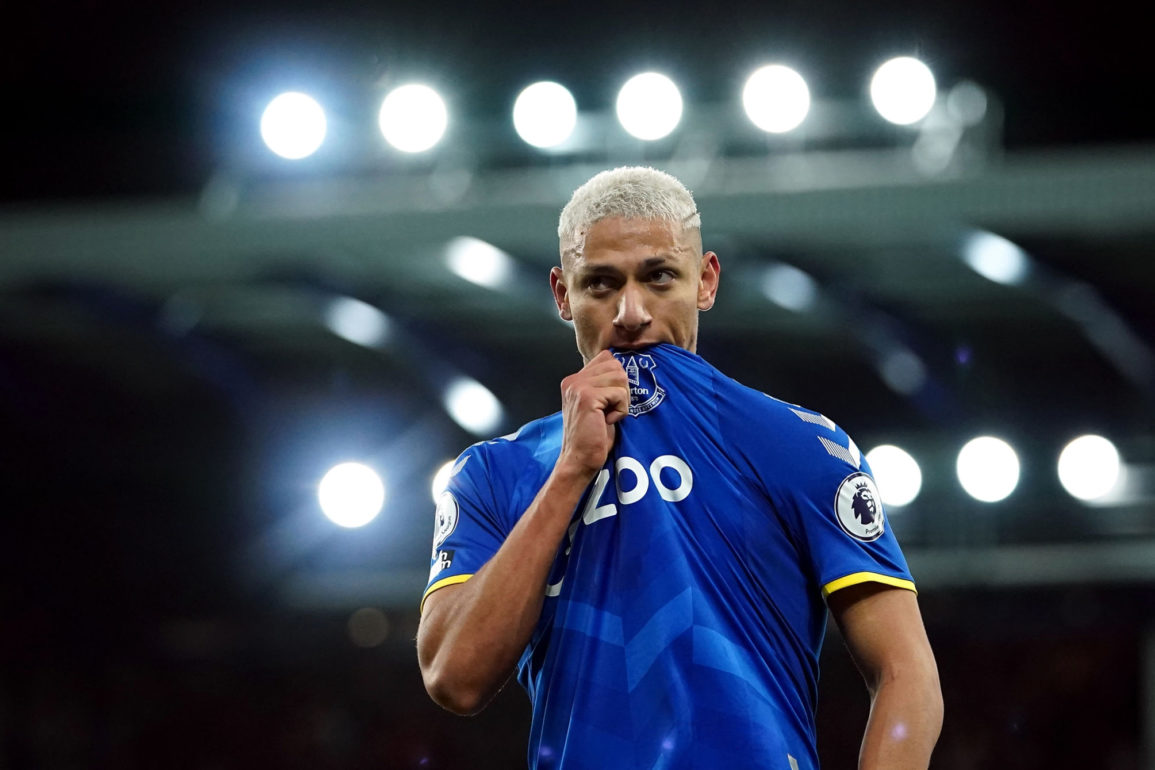 An absolutely stunning added on time blast from Demarai Gray saw Everton come from behind to beat Arsenal in a game that also saw Richarlison score with an instinctive header and, have two other ‘goals’ disallowed by VAR

What a last week it has been for Everton Football Club… on the wrong end of a 1-4 trouncing last Wednesday by them from across the park, social media saw an outpouring of angst from thousands of passionate Blues, predominantly targeted at majority shareholder Farhad Moshiri in respect of the feeling he’s failed to address shortcomings in his Board of Directors in the near six years of his tenure.

Things came to head on Sunday afternoon with numerous media outlets in both the UK and Holland announcing that Marcel Brands, the man Moshiri himself brought into Everton to be the Director of Football, had agreed a severance package to bring his time with the club to an immediate end. And yet it took until 11.45pm Sunday evening for the clubs Twitter account to confirm Brands ‘has left his post as Director of Football.’

And in the days between the rout by them across the park and the Brands departure, social media saw an almost unprecedented movement by dozens of fans groups for a staged walkout on 27 minutes of the game against Arsenal in a symbolic gesture of disgust that it’s now 27 years since our beloved club last lifted a domestic trophy.

The #27minutesfor27years campaign was intended as a signal to Farhad Moshiri that the fan base, or at least a more than significant proportion of it, want to see change at the very top of the club and a chance to express the very valid concerns so many have over the direction the club is heading.

To the game, Everton were in desperate, desperate need of a result as the weekends results had seen them slip down to 16th place only five points above the bottom three places. Victory over Arsenal was an absolute must and with the visitors having recovered from their own rocky start to the season and climbed to seventh place in the table, this game was very definitely a severe test of the resolve of the boys in Blue to allay the growing fears of the dreaded R word becoming a reality.

Manager Benitez speaking on Friday said, “I have experience in situations like these, to fight for titles and to try to avoid relegation. And my experience is telling me to stay calm, to keep working hard, to try to correct the mistakes, then keep going. What we want is to stick together because, that is crucial.”

In team selection news, the Spaniard advised that Dominic Calvert-Lewin whilst making good progress is probably still two weeks from being ready to return to first team action. Tom Davies remains out with a knee injury but in better news, Andre Gomes is fit again and Mason Holgate was available after his suspension. Yerry Mina and Salomon Rondon were due to face late fitness tests.

Former Everton midfielder, Mikel Arteta, endured a stressful start to the season however, he and his squad didn’t panic and a string of improved performances and results have seen the Gunners recover and climb back up the table.

Bringing his side to face an Everton side winless in eight games, Arteta refused to take things for granted when he told his media gathering, “They are a team that wants to put things right and win, and on Monday night at Goodison I know what I am going to expect under the lights, with the fans they have it will be a tough game.”

Arteta had some injury concerns with goalie Bernd Leno, Emile Smith Rowe and Granit Xhaka all back in contention for selection. One area of concern for Arteta is the goalscoring drought of his captain Pierre-Emerick Aubameyang, who’s failed to hit the onion bag since netting in a victory over Aston Villa back in late October. Arteta commented, “He is aware of how much we need him as a team to score goals and, at the moment, they’re not coming. But, the rest of the things we’re asking him to do, he is trying his best.”

On a blustery, cool and wet evening, our referee was Mike Dean.

Everton began brightly seemingly eager to blow away the memory of recent games and a good pass from Keane was relayed on to the overlapping Godfrey who, gaining the Arsenal area, lost his footing and the threat was cleared. The Blues were pressing forcefully in the early exchanges while the visitors were happy to try and pass their way up the field and recycle the ball when openings didn’t occur.

Godfrey with a crunching but fair tackle on Tomiyasu raised the crowds voices and when Gray set Townsend free on the left, his cross was too deep for Gordon to get on the end of. A nice move involving Godfrey, Richarlison and Gray saw the latter cut in off the left flank only for his rising shot to go high and wide of the target.

Partey clattered into Gray, the ref waved play on only for Townsend and Doucoure to get in each other’s way and possession was lost. The opening quarter hour had seen Everton more direct but, Arsenal composed at the back while offering nothing up front, until Tierney got away from Coleman to spread the ball right to Saka and his lay off saw a shot from Partey go wildly high and wide.

Arsenal whilst not threatening were getting their passing game in order but, a Gabriel giveaway to Gray saw him and Richarlison work the ball to Doucoure only for him to scuff his shot harmlessly wide.

The 27th minute walkout was partially observed and certainly raised the crowd volume before Mina went down and was replaced by Mason Holgate on 29 minutes.

Arsenal wasted their first corner and Pickford gathered a right wing cross from Tomiyasu comfortably. An Everton attack down the right saw White defend remarkably coolly after Richarlison got to the byeline and put in a low hard cross.

Arsenal got nothing from two further corners and heading into the final five minutes of the half, a free kick against Gabriel for a foul on Richarlison saw Townsend swing in a great cross and peach of a header from the Brazilian beat Ramsdale… only for VAR to deem he was offside in scoring.

To rub salt in the wound, inside the two added on minutes, Tierney got away from Coleman to cross to the near post where Odegaard arrived to finish neatly inside the near post.

Gray was hurt in an early second half collision ahead of Ramsdale hurriedly turning a Gordon cross behind for an Everton corner that led to Gray shooting straight into his arms. Five minutes into the period, Godfrey was booked for another robust challenge on Saka and an ankle tap on Saka by Richarlison gave the visitors a second free kick in quick succession – Odegaard finding Gabriel in space for a header that Pickford gathered easily.

The Goodison crowd were growing restless and another cross from Tierney through the six yard area didn’t help the mood. Doucoure charging forward ran into a phalanx of red shirts but he then took a pass from Allan to send in Richarlison and incredibly, VAR again ruled he was offside – Goodison was incensed.

Odegaard set Martinelli free on the right and rounded Pickford but, saw his cross nestle on top of the net. An hour gone and referee Dean annoyed the crowd again by allowing Lacazette to clearly impede a Blues free kick and wave play on.

Doucoure released Gordon on the right and he was flattened by Xhaka who quite rightly was booked but, the free kick from Townsend was poor and sailed out for a goal kick.

Lacazette upended Gray and on 65 minutes, before the free kick was taken, Tavares replaced Tierney in the first Arsenal change, Everton responding in sending Andre Gomes on for Andros Townsend.

Martinelli went down off the ball and again, Goodison voiced its annoyance at referee Dean for halting play before he was eventually replaced by Nketiah. And the crowd anger increased as Gabriel went down after a slight bump from Doucoure.

Into the final quarter of an hour and Arsenal went into time-wasting mode before a ball down the right for Coleman saw him keep it in play and Nketiah go down under a challenge from Gordon. Gomes worked a one-two with Gray but couldn’t get a shot away and Arsenal continued to try the crowds patience delaying every goal kick and throw in.

On 79 minutes, Gomes saw a shot blocked, the ball fell to Gray who saw his curling shot come back off the crossbar and finally, with a terrific reaction header, Richarlison pulled the Blues level.

Goodison was reinvigorated and Ramsdale held onto an Allan shot as the volume of support cranked up a few more decibels. A good tackle by Holgate on Xhaka saw him find Richarlison but his ball for Gray was blocked and cleared before an edge of the seat moment at the other end as a cross from Odegaard went just over the bar.

Five minutes left, could Everton find the winner they needed and deserved, as Anthony Gordon got a warm round of applause as he was replaced by Alex Iwobi.

And in six minutes of added on time, Everton struck with a goal of the highest quality as Demarai Gray cut in off the left to hit an unstoppable shot into the top corner and Goodison erupted.