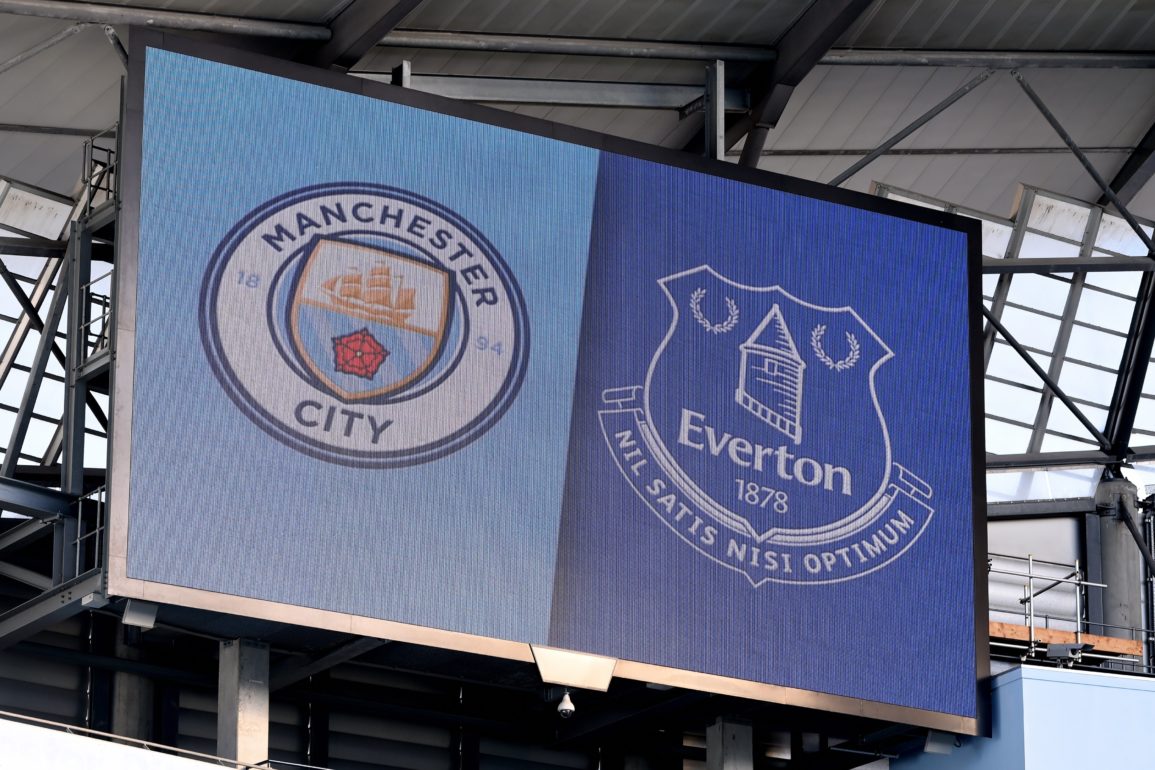 A sublime pass from Joao Cancelo for Sterling to open the scoring and a thunderous shot from Rodri were just two examples of the gulf between City and Everton, the home side completing their not unexpected victory as Silva netted a late third.

Not since the David Moyes era have Everton relished visits to the Etihad Stadium and this short trip to Manchester was another fixture many Evertonians were fearful of given the paucity of the Blues squad at present thanks to the ongoing injury problems.

City, six points behind league leaders Chelsea, at kick off time were definitely without Kevin de Bruyne, the Belgian international having tested positive for Covid-19 following his time with Belgium in the past two weeks. Pep Guardiola also had doubts over the availability of Jack Grealish and Phil Foden but, was able to call upon Aymeric Laporte having served his recent suspension. And with Gabriel Jesus having bagged eight goals in eight games against Everton and with a host of other top class players to call upon, Guardiola’s selection issues paled in comparison to those of Everton manager Benitez.

Guardiola speaking ahead of the game praised the ball-playing skills of his number one goalie, Ederson, when he said, “Yeah,” he said when asked if the 28-year-old was the best he had coached in terms of possession. “For the quality of the pass and especially the right moment to give the pass. It’s not always the quality of the pass, it’s the moment you have to do it. He has the patience and decision making to do it.” The City boss admits there is an element of risk that comes with the way he wants Ederson to play as he will regularly receive the ball with the opposition attempting to put him under pressure inside his own penalty area but, the Catalan is happy to accept such nerve-jangling moments because of the rewards it can provide. “When everything works we say how good it is,” he concluded.

Everton manager Rafael Benitez doesn’t have the riches in his squad that his Spanish counterpart enjoys however has been heartily encouraged by the recent return to action of former City midfielder Fabian Delph. With an injury record no player wants, and with many Evertonians highly critical of him being signed in the first place, Benitez noted “He has the right mentality, the right attitude. I have to stop him in the training sessions because he’s pushing very hard. What I saw from him at the beginning, I think he knows we were thinking about replacing him. But he’s trained really well, we’ve had to wait for ten weeks for him to be available. He’s showed commitment, intensity and he’s quite vocal. He has the experience of winning something and the mentality to help the young players.”

The return of Delph is a much-needed boost for Everton as coming into this game they would definitely be without Mason Holgate through suspension, Dominic Calvert-Lewin, Andre Gomes, Abdoulaye Doucoure and Tom Davies along with Yerry Mina missing since the previous international break.

Benitez looked ahead positively saying, “In the last game against Tottenham, the team showed character and the right mentality, and that’s what we have to do in every game. We know we are playing against a good team. We have confidence we can do well. The training sessions have been intense and everybody has been positive. We miss some players and we have some issues. Hopefully these players coming back will give us a boost and we will have a stronger team for the rest of the first part of the season – and especially for the second part of the season.”

The formation and tactics were likely to prove vital for the starting line-up Benitez was able to call upon: Pickford, Coleman (c), Godfrey, Keane, Digne, Townsend, Allan, Delph, Gray, Gordon and Richarlison.

Our referee on a bright but, cool afternoon was Stuart Attwell.

A bright start from the Blues as Demarai Gray went forward and City had to double back quick to prevent him getting shot away and clearing from Gordon as he tried an early effort, City countered with Sterling going down rather too easily to win a free kick that came to nothing.

City settled into their possession game and worked an opening that saw a Gordon clearance picked off and fired goalwards by Cancelo, Palmer deflecting it away for a goal kick. Everton playing a 4-5-1 formation in the opening stages saw them trying to deny City space in midfield but, inevitably leaving Richarlison somewhat isolated further up the field. Just past the ten minute mark, Sterling got around Digne and cross to the back post where Foden climbed but, couldn’t direct his header on target.

Gray went down as an Everton foray forward broke down and Delph halted the City counter with a foul on Sterling. Gray needed attention and looked to be in some pain before limping off to be replaced by Alex Iwobi with just over a quarter of an hour played.

A deep cross from the right by Walker saw Pickford spill the ball and claiming he was fouled by Foden, Gordon and Foden then coming together and both getting to their feet gingerly. City dominating possession won a corner as Digne deflected a Sterling cross behind, Keane with a double clearance to get the ball away. The game was being played almost entirely in the Everton half of the field and another City attack saw a vital block by Allan on a shot from Gundogan as the game took on a siege status. Cancelo won another corner off Godfrey that Keane cleared momentarily as City swarmed all around the Blues area. Another deep cross this time from the left from Foden reached Sterling, thankfully his header ballooned up and over the bar.

Pickford was quick off his line to deny Silva found by Palmer, the ball headed goalwards by Gundogan to go behind off the top of the crossbar. Palmer span 25 yards out to send a shot low to Pickford’s left hand side that he reached and recovered his ground quickly enough to gather a follow-up effort. An Everton counter saw Richarlison lunge in on Walker and pick up a yellow card that will result in him missing the game at Brentford next weekend through suspension. Godfrey with another timely block to a Foden cross conceded another corner that Allan blocked and Iwobi hoofed downfield for a few seconds of respite.

Sterling went down very easily again under a challenge by Keane and referee Attwell awarded City a penalty, VAR reviewed it and called for the referee to look at the incident as the umpteen slo-mo views clearly showed no contact between the players, and Attwell correctly reversed his decision but, why wasn’t Sterling booked for diving ???

It was still all City as Foden and Palmer forced Godfrey into conceding another corner but so far so good for Everton as the defence, whilst stretched at times were holding firm and this set piece again produced nothing for the home side. Cancelo got wide left again to cross deep, Keane putting it behind and again, Everton defending the set piece well and Pickford launched a counter attack that saw Walker scamper back quickly to deny Iwobi a chance to get a shot away. Allan then spread the ball right for Iwobi, his first time cross was blocked, cleared and City got forward again in numbers to open the scoring as Digne cleared from Sterling only as far as Cancelo who guided a superb pass back into the Everton area for Sterling to hit on the half volley first time past Pickford on 44 minutes.

Three added-on minutes were signalled and Everton burst forward through Townsend to be brought down by Laporte on the edge of the City area, the City defender rightly booked for a cynical foul. Townsend struck the free kick firmly but, straight into the midriff of Ederson.

Neither manager chose to make any changes for the second half that needed Everton to try and be more assertive when they gain possession. Again, a bright start from the Blues as they got forward and Cancelo brought down Coleman as he looked to get around him. Townsend with the free kick wide right that was headed clear and an air shot by Delph saw City clear their lines comfortably.

A slip by Allan saw an early corner to City, Delph with a glancing header conceded a second from the other wing, Pickford with a good punch clear and when the ball was lofted back in by Palmer, City claims for a foul by Iwobi were waved away. More calls for a penalty were waved away after Silva went down after losing out to Keane, Everton putting the ball out of play to allow Silva to get treatment – presumably on his jaw as he whined at the referee from the moment he got back to his feet.

It became two-nil in the 55th minute as Keane got a good block on a cross from Palmer and Allan could only play the ball into the path of Rodri who unleashed a piledriver from 25 yards that gave JP no chance despite his valiant effort diving to his left.

The first substitution by City saw Mahrez replaced Foden in the 58th minute and we passed the hour mark with the home side in complete control and putting together a move that saw Mahrez screw a shot wide of the target. More City appeals for a penalty rang out as Mahrez went down, clearly not touched by Digne and Everton withdrew Fabian Delph on 63 minutes to bring on Salomon Rondon, presumably to switch to a 4-4-2 to try and get back into the game.

A break lead by Townsend saw a cross from Iwobi cleared as City got back in numbers and Gordon penalised for a foul on Walker. City were strolling, they had no need whatsoever to overwork themselves against an Everton side that looked short of ideas and a free kick for a foul by Godfrey on Palmer saw Mahrez shoot straight at Pickford. Everton countered through Townsend to feed Iwobi for a cross that saw Richarlison attempt a spectacular bicycle kick, sadly it didn’t come off and City cleared easily.

Another Everton counter saw them get forward in numbers, City winning the ball back and countering themselves on for Walker to shoot wildly high and wide and entering the final quarter of an hour, City made their second change, Nathan Ake replacing Laporte.

Everton, to their credit, kept trying to get forward and bizarrely Townsend, Iwobi and Rondon worked the ball for Coleman to get in close and almost take Ederson by surprise at his near post, the City keeper eventually tidying up before launching another attack that saw Mahrez find Sterling in space, great work from Jordan Pickford to deny him a third City marker.

City, probably with PSG in midweek on their minds, looked to have dialled down their work rate but, still fluid enough to pass the ball around with consummate ease before Mahrez failed to get on the end of a cross from Cancelo. City may have eased off but, they still had more than enough guile to carve their way through the Blues rearguard and Silva made the most of an unfortunate deflection off Gordon to net their third strike.

Guardiola gave a debut to local youngster James McAtee who replaced Palmer and the substitute nearly got off to the perfect start as he tiptoed through the Everton area before being forced wide. Tyler Onyango got a cameo role replacing Allan for the three minutes of added-on time, that couldn’t end quick enough from the Everton perspective. 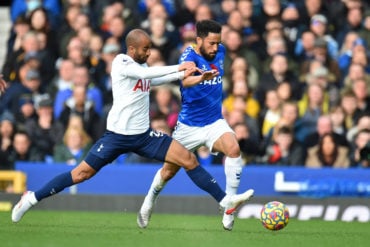