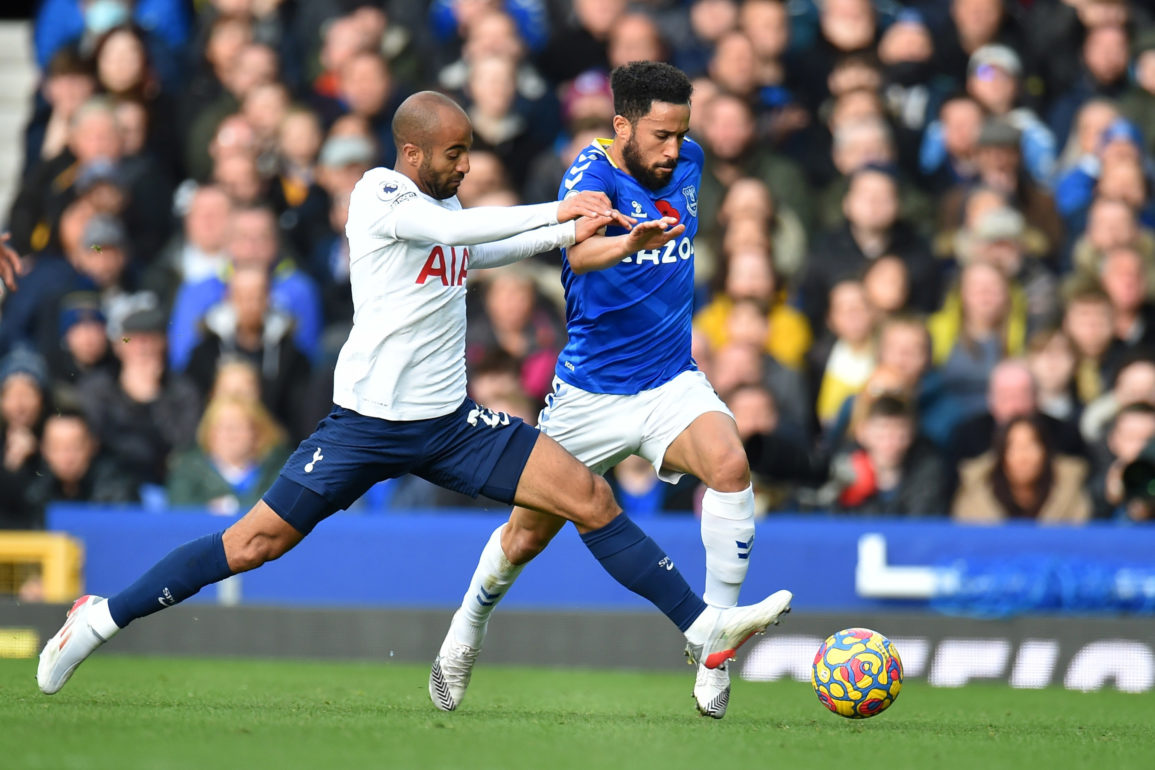 Blues denied and depleted by VAR.

Prior to the game Everton manager Benitez said he expected to see a much improved performance and he got it, and but for the lack of a true target man up front, the Blues should have won this mid-table clash that saw the honours shared in a far from boring encounter.

Is it premature or even crazy to talk about a game in early November being a ‘must win’ for Everton but, after three successive defeats and having slipped below halfway in the Premier League table following Saturday’s results, the less patient Blues fans could be forgiven for thinking this way.

And with the visitors one point better off and a place above Everton, and with a new manager – Antonio Conte – taking charge of his first game and looking to extend his four game unbeaten run against the Blues, it really was time for the home side to step up to the plate and reward their diehard fans with a performance.

Speaking on Friday and knowing recent performances have not been good enough, manager Benitez commented, “When you aren’t doing so well, you have to think about how to improve things, especially the confidence and mentality. I go back to the good things we have done. We started the season really well and the players showed commitment and intensity, everything the fans were expecting.”

He continued adding, “I remember when everyone was talking about it being the best football they’d seen in a while, and now we have this issue with the last three games. I have 100% belief they will do well during the season. I can see the commitment and I see what we’re trying to change.”

One area that hasn’t changed much since last Monday’s loss to Wolves is the list of unavailable players. Whilst Lucas Digne will play against Spurs, Dominic Calvert-Lewin, Abdoulaye Doucoure, Andre Gomes and Yerry Mina were all still unavailable for selection.

Having gotten his Spurs tenure off to a winning start with victory over Vitesse Arnhem in the Europa Conference League on Thursday night, Conte went straight to work preparing for his sides trip to Goodison as he outlined his schedule to the media. “We played Thursday night, on Friday morning we watched a video with the positive and negative things that happened, and I know that the players can be a bit tired after the game but, when you don’t have the time, you have to try to exploit every second of the day.”

Asked about his first domestic game for Spurs Conte commented, “We’re talking about a really good team, a strong team, and a really good manager who has won a lot in his career. The atmosphere at Goodison Park is an important atmosphere and, for sure, we have to bring a strong game and need to prepare in the right way. We have one day but, we’d do our best.”

Our referee on a pleasantly mild afternoon was Chris Kavanagh.

A decent start from the Blues pressing forward from the kick off and an early ball out to Gordon saw him cross from the right but, too strong for Gray. There was more intensity about Everton as shown when Godfrey intercepted in midfield and drove forward to take a shot that Lloris saved comfortably.

Delph, anchoring the midfield, got a good early tackle in on Kane and sent a 50-yard ball left for Gray that led to a free kick from which Delph lofted the ball to the back post where Keane couldn’t direct his header on target. Godfrey went in hard on Son who stayed down expecting a free kick and treatment, which the referee chose not to allow, and on eleven minutes, Reguilon was the first booking for a foul on Townsend.

A good interception by Delph saw him release Allan who tried a one-two with Gray to gain the area but, Spurs smuggled the ball clear. Delph was at the centre of just about everything for the Blues and he found Allan to find Digne for a first time cross that went across the face of goal with no Blue shirt there to capitalise.

A Spurs break saw Godfrey with a good block on a shot from Moura before Davies got away with a foul on Gordon leading to Romero bringing down Richarlison, Townsend sending the free kick too long and out for a goal kick. Kane spread the ball left for Reguilon to cross to the back post where Emerson headed aimlessly high and wide.

A good tackle by Delph on Kane was harshly adjudged to be a foul and he too saw a yellow card but, when Hojbjerg clattered into Delph, we didn’t even see a free kick awarded. Another decent move started by Delph to Allan and onto Digne and back to Allan for a cross that Richarlison claimed to meet but, again the header failed to find the target.

Everton were on top without finding the killer touch and another move saw Keane find Delph to release Gordon on the right with Townsend overlapping to cross and find Allan who saw his shot blocked and cleared, the follow-up effort from Gray wining the games first corner that came to nothing.

Delph spread another good ball wide left for Digne to find Gray who beat three men before going down in the area but, no penalty ensued. Delph with another interception again found a Gray but, another cross went through the Spurs area with nobody there to finish.

As one added minute was announced, Son found Kane wide right and his deep cross was met by Reguilon who blazed high and wide.

Neither manager made any changes for the start of the second half that saw Everton attacking the Gwladys Street End. Moura went down in the Everton area after a challenge by Keane, the referee rightly ignoring halfhearted claims for a penalty.

Delph with two good challenges earned a warm round of applause before a ridiculous awarding of a throw-in to Spurs incensed manager Benitez, Digne as well as large sections of the Main Stand in particular.

A shot from Reguilon was deflected behind for Spurs first corner that the loudly booed Son took and Townsend cleared. Gray with a strong cross from the left was just to high for Townsend who’d escaped his marker ahead of more booing aimed at the referee for another harsh decision against Richarlison.

Reguilon in hard on Gordon went unpunished leading to some Spurs pressure before Tom Davies replaced Fabian Delph just before the hour mark, the oft criticised Delph getting a very warm and well deserved standing ovation for his part in the game.

Everton were awarded a 63rd minute penalty as first Gordon appeared to be pushed and the Lloris brought down Richarlison. VAR asked the referee to review his decision and much to the annoyance and anger of Goodison, he overturned his decision.

Goodison was furious with a Davies challenge that left Townsend holding his shin and no yellow card shown. A corner on the right led to a Tom Davies shot being deflected behind and an off the ball challenge by Romero on Richarlison also went unpunished. The corner from Gray was poor and Spurs partially cleared, Everton quickly forward again with Davies shooting again but, straight at Lloris.

Spurs replaced Reguilon with Doherty with just under twenty minutes to play and Lo Celso replaced Moura in a double change by the visitors.

Hojbjerg with some good defending and dribbling cleared the danger as Coleman tried to work a shooting opportunity and another foul on Townsend wide on the right gave Everton another chance to get the ball into the Spurs area. Allan found Godfrey and the ball fell nicely to Gordon for a shot that was charged down and cleared hastily by the visitors.

Fifteen minutes to play and Spurs started time-wasting at throw-ins. Goodison was imploring Everton to gird their loins for a final push to win all three points however, Spurs were proving a tough nut to crack and looking to counter attack.

Digne to Allan to Digne to Davies and back to Digne for a pullback that Gray screwed wide of the far post and Mason Holgate replaced Allan for the last eight minutes plus added on time. Ndombele replaced the ever unpopular Son a minute later as Spurs appeared to settle for a point.

Ndombele was quickly booked for needless time-wasting before Holgate was caught in midfield and the Spurs counter saw Lo Celso fire a shot that cannoned back off Pickford’s right hand post. Holgate appeared to have redeemed himself with a strong tackle on Hojbjerg yet the referee adjudged it a foul worthy of a yellow card as four added minutes were announced. VAR reviewed the challenge and the referee changed the yellow card to a straight red and that was the end of the cameo role for Holgate.

J-P Gbamin replaced Gray for the little time left, and the eventual free kick saw Godfrey concede a corner that was cleared and led to Skipp being booked for a foul on Townsend. Tom Davies won a late corner that Romero headed clear, and that was that.