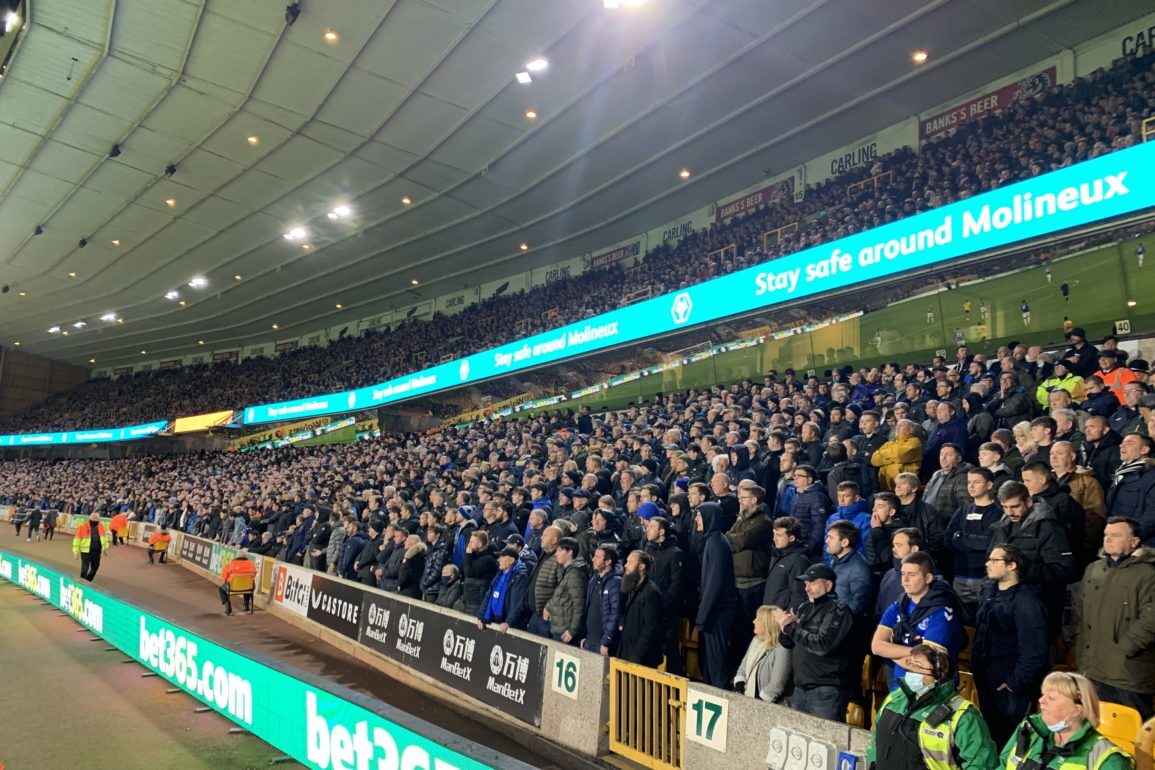 A second half strike from Alex Iwobi wasn’t enough to rescue a point for Everton who’d fallen behind to first half strikes from Kilman and Jimenez, the second a personal disaster for Ben Godfrey.

A Monday night visit to Molineux saw the Blues hoping to get something other than an L to the third team on the trot beginning with W. The opening of the 21/22 season wasn’t very good for the Black Country club as despite making chances, their finishing was pretty poor. However under new manager Bruno Lage, they used the international break in September well and since then, they’ve been scoring more freely and have turned their form around.

Korean signing Hee Chan Hwang has hit form in impressive style with four goals in recent games and with four points from a come-from-behind win at neighbours Aston Villa and a draw at Leeds, Wolves represented a stiff challenge for an Everton side winless since beating Norwich at the end of September.

Portuguese manager Bruno Lage, who replaced Nuno Espirito Santo in the summer, is beginning to stamp his mark on the club and noted, “I’m happy, but I want more. That’s what I’ve said to my players every day. We are happy, but we want more. Every time I push them to the limits because I don’t want anyone to be comfortable in their position. I don’t want anyone to be comfortable in the way we are, because our mentality is to do more every time. Even for us as coaches, even for the players, they need to have that mentality, because I want more from my career. I want to improve what I need to be better at to arrive to the next level. I’m happy, but every time with that pressure, I want more from them.”

Asked about the future adoption of five substitutes per side Lage commented, “In Portugal, we already have that situation, and I will not change my opinion because now I’m in a different position. We don’t have too many players, so if I have five subs to do, all the players will get involved in the game. If you are a strong team, you can change a lot. Sometimes the wingers to give more power in front, you can change more midfielders, or sometimes the strikers, so you have more chance to do it.”

After a decent start to his tenure as Everton manager, Rafael Benitez has encountered his first hurdle to be overcome, back to back home losses. The first against West Ham was disappointing, the second against Watford was little short of calamitous and the manager knows that kind of collapse in unacceptable.

And when asked about the Watford debacle, he was blunt and straight to the point in his assessment saying, “Why it happened is very clear – we didn’t win the tackles, we were in bad positions, we didn’t attack the ball when we had to defend. Too many things when you put them together. We were in a bad position when we conceded the second goal and then, after that, we were in bad positions – two or three players who were in situations that we cannot be exposed to. We have looked at the mistakes and how to change that, how to improve. The main thing is to be sure that we stick together as a team. The best way to respond will be winning the next game – it’s as simple as that.”

Many fans have been critical of the zonal marking that Benitez employs and he countered explaining, “When I came [to England] in 2004, we were doing zonal marking and people were criticising the system, then the year after and two years after, we were the best team at defending set pieces with the zonal marking. It’s just how you do it. If a player is coming running against you then you have to react. The main thing for us is that we attack the ball and we show some character when you have to challenge. We were not doing that.”

Not exactly a favourite with many Blues supporters, on a cool evening our referee was Martin Atkinson.

A quiet opening five minutes to the game as both sides weighed each other up, cancelling out each others early forays forward, Everton playing a conventional 4-4-2 formation with Gray and Richarlison hoping to combine and cause Wolves issues at the back.

Wolves won the first corner as Hwang fed Ait-Nouri and his cross was put behind by Keane, the set piece coming out to Neves via the head of Coleman and he struck a fierce first time volley that Pickford parried superbly and the loose ball was hastily cleared to safety by an alert Holgate. The next Wolves raid saw Moutinho pass up the chance of a shot to feed Trincao and his shor aimed towards the top corner brought another acrobatic save from Jordan Pickford, with England manager Gareth Southgate in the crowd to watch his number one ‘keeper.

Moments before the quarter hour mark though, Wolves thought they’d opened the scoring as Jimenez drove into the Everton penalty area – rather too easily – and the ball broke to Hwang to squeeze the ball in off the far post – the goal subjected to VAR review and rightly ruled out for offside against the Korean.

Wolves were clearly encouraged and put together another decent attack with Ait-Nouri again involved and finding Trincao for a shot that was blocked and fell nicely for Pickford to gather.

Holgate was lucky not to see a yellow card for a pull back on Trincao in the 19th minute, the free kick just right of centre about 25 yards out, ideally set up for Mountinho or Neves to shoot, Neves did and he cleared the crossbar. Everton manager Benitez was out of his seat to bellow some instructions, hardly surprising as his side had made little impression upon their hosts in the opening twenty minutes.

Wolves won another corner as Coleman blocked a shot from Jimenez and protested vehemently that the ball had gone behind off the Wolves striker, and the set-piece from Ait-Nouri picked out Kilman who climbed above Keane to head back across goal to put the home side ahead on 28 minutes.

Everton needed to find a way to get some possession in midfield and take the game away from Wolves who were dominating far too easily, with Ait-Nouri proving to be a real problem for the Blues down their right flank.

A terrible attempt at a back pass from Godfrey, under nothing but mild pressure by Trincao, couldn’t have fallen any better for Raul Jimenez goalside of Holgate and he had no problem whatsoever in taking the ball on and chipping it over the onrushing Pickford for the second goal less than five minutes after the first.

Iwobi switched from being an anonymous presence on the left to the right ahead of a flicked-on ball from Townsend finding Gray but, he snatched at his shot and sent it across the face of goal and wide. Approaching the interval it was still Wolves looking the more likely but a free kick from Townsend somehow got through the Wolves defence and Holgate coming in at the back post was somewhat taken by surprise and couldn’t keep his shot down, offside was the decision anyway. Two added minutes were announced and the break couldn’t come quick enough for Everton after a thoroughly abject first half.

Fabian Delph was an immediate change at the start of the second half, replacing Jean-Philippe Gbamin in an attempt to stiffen up the midfield that Wolves had far too easily bypassed in the opening 45 minutes.

A better start by the Blues saw some early pressure on the right leading to a whipped cross from Townsend put behind for a corner by Coady that was dealt with by the home defence. Getting forward again through Townsend, he fed Gray but, Kilman got back to block his shot away for a corner that was easily gathered by Sa in the home goal.

Iwobi crashed a loose ball out for a corner to Wolves that Keane headed clear and it gradually led to a cock-up at the back by Wolves between Sa and Coady, Richarlison not quite able to capitalise on the confusion and Sa rescued the home side from conceding a comedy goal.

Good work by Richarlison in his own area saw him find Gray in midfield to win a free kick and Townsend got forward to send in a couple of crosses that Wolves eventually cleared via a punch from Sa, better from the Blues but still not incisive enough to genuinely threaten the home side. Wolves countered through Hwang finding Semedo and his chipped cross saw the header from Jimenez hit the outside the post and go behind for a goal kick.

An hour gone and Wolves were still looking very comfortable and happy to invite Everton on and hit them on the counter attack. Iwobi was proving equally as ineffective on the right as he had on the left, surely Anthony Gordon would appear as a substitute soon to give him a chance to make some impression on the game?

A foul by Semedo on Gray gave the chance for a free kick to be sent into the Wolves area but the home side cleared three attempted crosses before the ball came back into the area on a shot from Godfrey that was blocked into the path of the unlikely Alex Iwobi and he reduced the arrears with a well struck low finish from ten yards on 65 minutes.

Having conceded, Wolves went forward with purpose with Hwang feeding Trincao and getting past Godfrey, he somehow scuffed his shot wide when it looked odds-on to be 3-1. Twenty minutes to play and both sides were looking to get forward, a long ball from Delph for Richarlison saw him find Townsend, and eventually the ball fell for a shot from Godfrey that saw Saiss hurt making a partial block.

Wolves were awarded a 73rd minute penalty for a challenge by Holgate on Trincao, the VAR replay clearly showed the tackle was made outside the area and the decision was rightly amended to a free kick on the right that was wasted and easily cleared by the Blues. Hwang dispossessed Coleman and then tried one too many passes with Jimenez that allowed the Blues to get back and clear the danger.

Anthony Gordon eventually replaced Alex Iwobi on 78 minutes, Wolves too making a change a minute later, Podence replacing Trincao for the final 12 minutes. Everton were now looking as lively as they had all game but, would it be too little too late to snatch a point?

Gordon driving into the penalty area tried to find Allan as the Blues strove for an equaliser as Benitez contemplated a third change. It was Wolves defending now as a shot from Coleman on a pass from Gordon was blocked out for a corner, Sa somehow keeping a header from Gordon out to preserve the home lead. Less than five minutes to play and Wolves put every man behind the ball to try and keep Everton out, Gray overplaying and giving away a free kick that saw Wolves replace Jimenez with Dendoncker for the final moments with Rondon also appearing for a cameo role at the expense of Gray.

Five added minutes were announced, could Everton snatch a point?

A bit of needless push and shove saw late yellow cards for Ait-Nouri and Seamus Coleman. Everton were straining forward now, Holgate getting forward to find Godfrey for a cross that was cleared for a throw-in but, the damage had been done in the first half and Wolves saw the game out.