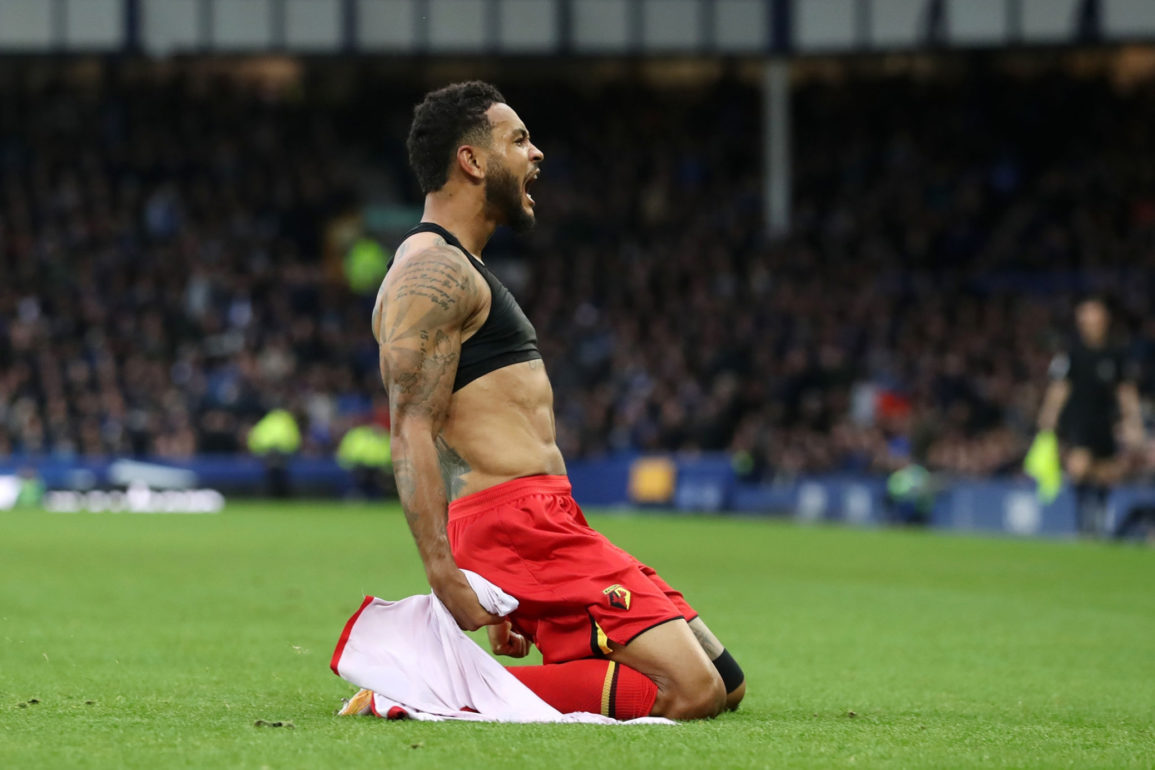 A bad, very bad afternoon at the office for Everton as Josh King returned like the proverbial nightmare to bag a treble as his new side completed their first ever win at Goodison Park. After a bright start that saw Tom Davies score inside three minutes and Richarlison net within four minutes of coming on as a second half substitute, Everton failed to make the most of their two leads and fell away to a second successive and even more dismal loss

Everton and manager Rafael Benitez were keen to get back to winning ways after the disappointing loss to West Ham and struggling Watford, under their latest managerial appointment Claudio Ranieri, tipped up at the Grand Old Lady with another almost full house hoping that the Hornets would be well and truly spanked back down the M1.

However if victory was to go the way of the Blues, it looked unlikely to be plain sailing as the injury situation has deepened in the past week. Midfielder Abdoulaye Doucoure, who’s made an excellent start to the season, incurred a foot injury in training and could be missing for a number of weeks. Defender Yerry Mina was also ruled out of the Watford game with a hamstring twinge and the news of Dominic Calvert-Lewin is of a setback in his recovery from a quadricep injury and he could be out of action till the New Year. Andre Gomes is still recovering from a calf strain and whilst Fabian Delph has returned to training, he was unlikely to feature.

Speaking specifically about Mina, the manager commented, “Yerry played three games for the full ninety minutes with the (Colombia) national team and coming back had to follow Covid rules. He felt his hamstring in training the other day, so won’t be available.”

On a brighter note, Brazilian forward Richarlison has recovered from a knee injury that saw him miss five games and Evertonians hoped a return against his former club would be just the spur to a really positive return. Benitez noted, “Richarlison has been training, he has been okay. Obviously, match fitness is an issue but, he is happy and available.”

On the opening weeks of the season, Benitez offered, “The start has been good, if you consider the top scorers are not available and still the team is in a good position, fighting and creating chances.” He continued in a positive vein adding, “the other day (against West Ham) we had chances and maybe a draw would have been fairer. We would be in the top four but, it is like that. I am confident we will do well now and at the end of the season, which is the most important thing, the last ten games.”

The visitors were facing Merseyside opposition again having been thoroughly trounced at Vicarage Road by them from across the park last time out, giving new manager Ranieri a clear indication of the job he’s taken on. The Italian celebrated his 70th birthday last Wednesday and in so doing will become the fifth manager of that age to manage in the Premier League.

The Hornets have never won at Goodison Park but, new manager Ranieri has never lost against Rafael Benitez is six previous Premier League encounters and has recorded more wins against Everton in all competitions than against any other club.

Speaking on Friday Ranieri said of his new charges, “the mood is very good, they’ve worked very well during the week and of course, they aren’t happy. They know they played badly, I am the first to recognise that but, we have to react and show our best.” He continued by adding, “it was much better because against Liverpool, I had only met my players two days before. This weeks worked well with them, and day-by-day they understand my ideas about football better.”

Watford had injury concerns of their own with right back Kiko Femenia doubtful with a hip problem and both Francisco Sierralta and Christian Kabasele definitely ruled out of contention. Norwegian Josh King had recovered from a knee injury and was hoping to start against the Blues for whom he got precious little game time under Carlo Ancelotti.

On a pleasant late October afternoon, our referee was Graham Scott.

A great start by the Blues saw them take a third minute lead as Anthony Gordon raced down the left wing to play the ball to Demarai Gray on his outside and his low cross into the area was met perfectly by Tom Davies to give Foster no chance from six yards.

Another flowing move started by Keane and involving Gray, Davies and Gray again led to a right wing cross from Townsend that was just too high for Gordon to control, his header spinning wide of the far post.

Watford drew level in the 13th minute when a free kick on the right was flicked on and King forced the ball home, the linesman flagged for offside but, VAR overruled him and the goal stood.

Lucas Digne picked the first yellow card of the game for a foul on Sarr and a cross from the right by Townsend was just too high for Rondon to make anything of. More Blues pressure saw Coleman get forward with Gray and Townsend leading to a shot from the latter that went across the face of goal and wide.

A strong run by Masina saw the ball cleared only as far as Sissoko, the Watford skipper striking a powerful low shot that went wide of the target. Everton won a corner as Digne and Gordon worked the ball to Rondon, his shot deflected wide but, Watford cleared and broke with King cutting in from the right to find Hernandez and his curling effort taking a slight defection for a corner that saw Sissoko Fire high over the bar from the edge of the area.

Coleman found Townsend a fabulous turn took him clear away from Cathcart only for him to slightly overplay the ball out before he could get a telling cross in. Everton won another corner as a shot from Allan was deflected wide and Everton had appeals for a penalty turned away after Gordon appeared to be bundled over in the area.

A push on Godfrey and a foul on Davies went unpunished by the referee, Goodison voicing its discontent at the non-decisions, before Everton got forward again with a cross from the right by Townsend just too high for Davies arriving in the visitors area yet again.

Four added minutes were signalled and neither side could break the deadlock, and referee Scott received some boos for his first half performance as he left the field.

No changes by either manager for the second half was somewhat disappointing for the home fans hoping to see Richarlison, who started to warm up as play got under way. Allan and Gordon worked the ball clear to send Rondon away on the left flank, his cross was too strong but, led to a foul by Hernandez on Davies, the free kick failing to produce.

Allan again leading the charge fed Townsend to find Digne, his cross came out to Gordon, his shot partially blocked and gathered by Foster. Allan was booked for a clear dive trying to win a penalty after Gordon appeared to have been brought down, the referee frustrating both the Everton players and crowd with his apparent myopic view on proceedings.

Everton needed an excellent reaction save with his feet from Jordan Pickford to deny King a second goal as he got on the end of a right wing cross from Sarr on 57 minutes p… and Goodison voiced its opinion that it was time for Richarlison to join the action. Richarlison duly appeared but the home crowd were mystified at the withdrawal of Anthony Gordon.

Ironic cheers as Kucka was penalised for a foul on Digne, his free kick saw Godfrey get to it just ahead of Davies, the ball spinning harmlessly out for a goal kick. Richarlison clearly wanting to make an impact did so inside five minutes, meeting a ball from the right flank from Michael Keane to head the Blues back in front and celebrate wildly by the corner flag.

Pickford saved well from Hernandez as Watford tried to respond and Sissoko went through the back of Richarlison, no foul given. Coleman to the rescue to clear a cross from King after Keane and Digne messed up a clearance, the game coming alive and much more entertaining than latter part of the first half.

Watford made their third change with Nkoulou replacing Ngakia in the 76th minute. A minute later, Demarai Gray got a warm round of applause as he was replaced by Alex Iwobi.

Keane with a last gasp clearance conceded a corner and again, Everton failed to defend a deep cross and Kucka headed home the visitors second equaliser. And literally straight from the restart, Watford regained possession to get down the right and the cross found King in oceans of space to bury his second of the game.

It was all Watford now and Pickford was needed to make a fingertip save round the post that saw Hernandez again find the head of Kucka, his effort going over the bar. Into the final eight minutes and Everton needed something inspirational but, when Rondon played Richarlison in on the right to cross, Digne blazed his first time effort miles over the bar.

Some woeful defending by Everton, failing to win 50-50 challenges led to Watford sealing their first ever win at Goodison as Hernandez caused panic and King completed a hat-trick on his return to the ground where he played so, so little last season.

Watford rubbed salt into the Everton wounds as they bagged a firth in added-on time by which time I was too fed up to note the name of the scorer.