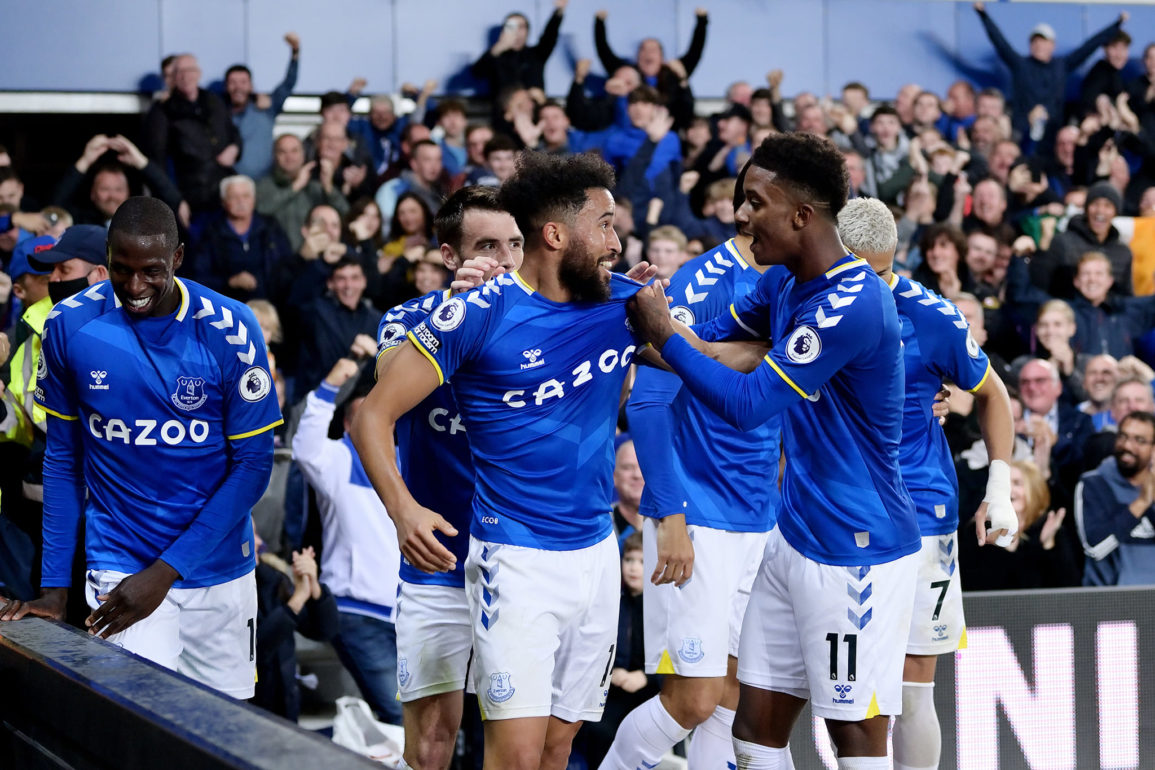 Following an encouraging start to the new season in August, we headed into September in good heart and as confident as realistic Blues supporters can be for continued success. Once again, the month saw four games in the diary and they yielded two wins, our first loss in the league this season and a disappointing penalty shoot-out exit of the Carabao Cup.

Game One pitched Burnley into Goodison and for the thick end of the first hour, the East Lancashire outfit looked to have put together a gameplan to secure their first away win of the season as they opened the scoring early into the second half. Could the Blues respond in similar fashion to that in overcoming Southampton on the opening day – not half !!! A blistering comeback saw Michael Keane power home a header from a Townsend cross, then the former Palace forward struck the go-ahead goal with a sublime shot from 25-yards into the top corner, and barely had the cheers died away than Abdoulaye Doucoure split the Burnley defence apart to send in Demarai Gray to consummately beat Nick Pope to send Goodison into raptures of delight.

Game Two saw the Blues visit Aston Villa for the most-played fixture in top-flight English football, and in something of a reversal of the Burnley game, Everton were good value for 0-0 at the hour mark. However, the removal of Salomon Rondon – on top of Everton being without four players in Jordan Pickford, captain Seamus Coleman and strikers Richarlison and Dominic Calvert-Lewin – gave Mings and Konca free license to push forward and Villa duly grasped the initiative with both hands. Goals from Cash and a brace of sorts from Leon Bailey saw the Blues suffer their first loss of the season.

The following Tuesday saw the first League (Carabao) Cup tie between Queens Park Rangers and Everton with Loftus Road the venue. Rangers twice led through Charlie Austin and twice Everton drew level – a nicely converted volley from Lucas Digne and a close range finish early in the second half from Andros Townsend. Try as they could though, the depleted Blues couldn’t find a way to subdue an organised Rangers and the game went straight into the penalty shoot-out scenario. Both teams were perfect through fourteen penalties before QPR goalie Dieng denied Tom Davies and Dunne beat Asmir Begovic to send the home side into the next round 8-7.

Jordan Pickford was the first of the four – missing from the trips to Villa Park and Loftus Road – to return to the first team when he returned in goal to face winless Norwich City. The Blues were clearly the better side throughout albeit without embarrassing the visitors who already look doomed to a long battle against relegation back to the Championship. The game was settled by a goal in each half, the opener from the penalty spot from Andros Townsend after Allan had been brought down just before the half hour mark, and the second with just under a quarter of an hour to play as Allan getting forward again found Demarai Gray and his perfectly weighted pass to his right found Abdoulaye Doucoure and he beat Tim Krul low to his left to settle the outcome.

Twenty different players pulled on the Everton shirt through September with eight – Michael Keane, Demarai Gray, Lucas Digne, Andros Townsend, Abdoulaye Doucoure, Alex Iwobi, Ben Godfrey and Salomon Rondon – appearing in all four games however, no player played every minute of the four games, something of a first in recent seasons.

Four games in September produced three Man of the Match winners as voted for by you, the fans on GrandOldTeam.com and it won’t come as much surprise that Andros Townsend swept to a conclusive victory for his part in the win over Burnley. Demarai Gray continued his fine start to his career with Everton taking the poll vote in the loss to Aston Villa and Andros Townsend again the leading vote-getter in the Carabao Cup defeat to QPR. An all-action showing topped off by his second goal at the Street End saw Abdoulaye Doucoure romp home in the poll for the Norwich City game.

With the monthly round-up done and all the other formalities dealt with, polling numbers checked and double checked, it’s time to reveal our top three players for September – remember, it’s your votes that put them there.

In third place and as we said, continuing his fine start as a Blue to podium again – Demarai Gray.

In second place and enjoying his start to the season with another podium finish – Abdoulaye Doucoure.

And that leaves our winner with 35.4% of the total votes polled and the GrandOldTeam.com Player of the Month for September, the congratulations go to – Andros Townsend.