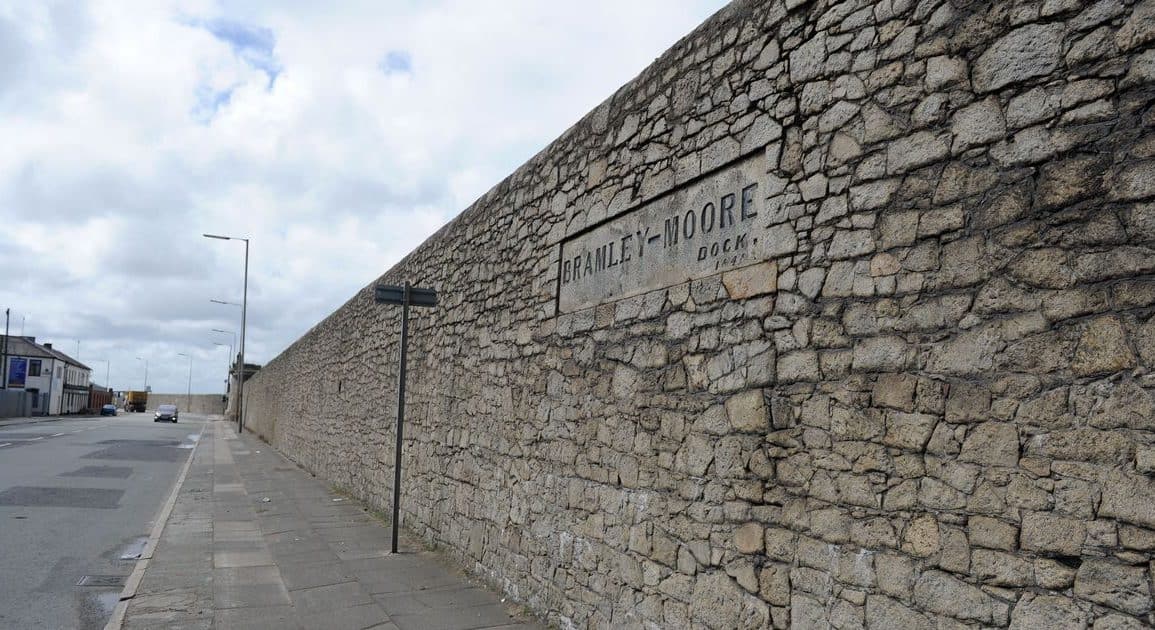 Everton and their construction partners Laing O’Rourke have cleared the dock basin of unwanted materials prior to the infilling of Bramley-Moore Dock for Everton’s new 52,888 capacity stadium.

The round-the-clock mission involved expert divers plunging into dark murky waters to identify and fish out anything from old car tyres and bits of scrap metal to ship anchors and World War Two relics. There was no report of the Arteta money being found.

As part of the Club’s enabling works on the dock, the search has seen ex Royal Navy divers using state-of-the-art sonar technology to help identify around 400 items located 10 meters deep.

“We’ve had two teams of six divers, working day and night shifts and they are either UXO (Unexploded Ordnance) or recovery teams,” said Lenny, one of the dive team members.

“UXO looked for unexploded ordnance; primarily anything from World War Two onwards and recovery was bringing out anything that may be lying on the bottom of the dock.

“When we found something, we got it on the camera, because sometimes the camera can pick things up the divers can’t as sometimes they only had six-to-eight inches of visibility in 30 feet of water.”

The Club’s diligent work in choosing to methodically clear the dock has proved the right thing to do as Lenny and the team of divers recently uncovered small anti-aircraft shells dating back to World War Two, a common find in many docklands developments across Western Europe.

The unexploded devices were carefully removed from the water with the Army and Navy called in to expertly discharge the shells. While the war-time relics were never a danger to the public, they still needed to be treated in the correct manner.

Colin Chong, Stadium Development Director at Everton, explained: “We undertook a desktop exercise even before we started and agreed a methodology and risk level with the planning authority on how we would survey and make the site safe from stuff dating back to the Second World War and more recent stuff that people have thrown into the dock.

“That involves Merseyside Police, the Environment Agency and all stakeholders who may be interested in anything that could present a risk to us and the public.

“While they were only small in size, when we found them, we had to treat them with the respect they deserve because we were not sure of the condition of them and I take my hat off to the divers.

“They are quite used to this. But they were swimming around in water, 10 metres deep, with very little visibility and often in the pitch black.

“They had a high-pressure lance to clear away material around any target. They were literally feeling around in the dark and yet they knew what they were touching as soon as they felt it.

“We recognised in our planning that the environment would potentially throw up these issues and fortunately we planned for finding them, which is what we set out to do.

“Sadly, there were a few of them, but it isn’t going to impact on the overall programme or the quality of what we intend to deliver.”

Lenny and his fellow diving team have completed their round-the-clock shifts with their important enabling work now de-risking the site for dock infilling and then stadium construction.

As the Club prepares to begin rehoming the wildlife from the dock later this month, the Laing O’Rourke team have been repairing and sealing any holes in the dock wall to effectively create a ‘bath-tub’. This is in preparation for the infilling of the dock, which has also seen the laying of the pipework required to bring in 470,000 cubic meters of sand, dredged from the Irish sea, that will displace the water currently in the dock into adjacent water bodies.

Elsewhere in the enabling works, the demolition is well under way to flatten existing non-listed buildings, that will see much of the materials being re-used across the site. Works on the welfare facilities for site staff also continue in preparation for the next phase of works.

“Demolition is ongoing as we speak and we are actually forming the ‘bath-tub’ now, which effectively segregates our dock from the others to allow us to fill it with sand harvested from the River Mersey,” added Mr Chong.

“So there’s some major maritime engineering activity taking place. There are lots of marine life still in the dock, so we’ve fitted a bubble curtain to stop any more coming back in and from 17 September we will start to remove all the fish from the dock under the jurisdiction of the environment agency.

“They will monitor how we remove and release the fish, recording the species, so there’s a real detailed methodology of how we intend to clear the dock.”

Everton’s development in Liverpool’s North Docks is recognised as the largest single-site private sector development currently in construction in the UK. The transformational development is a symbol of the region leading the North and the UK’s post-pandemic recovery by delivering one of the largest packages of public benefits ever seen in the North West, generating a £1.3bn boost to the economy, creating tens of thousands of jobs and attracting 1.4m visitors to the Liverpool City Region.

Hailing the collective effort and looking forward to the once-in-a-generation development, Colin Chong added: It’s complicated, but when we’ve finished the effort will be worth it and it will be such an iconic structure, visible from the Irish Sea, the Wirral, North Wales. All the tourists and visitors who come floating down the Mersey on cruise ships will see it as an entry point to the centre of Liverpool.

“It’s really going to be a new icon, a fourth grace for Liverpool.”