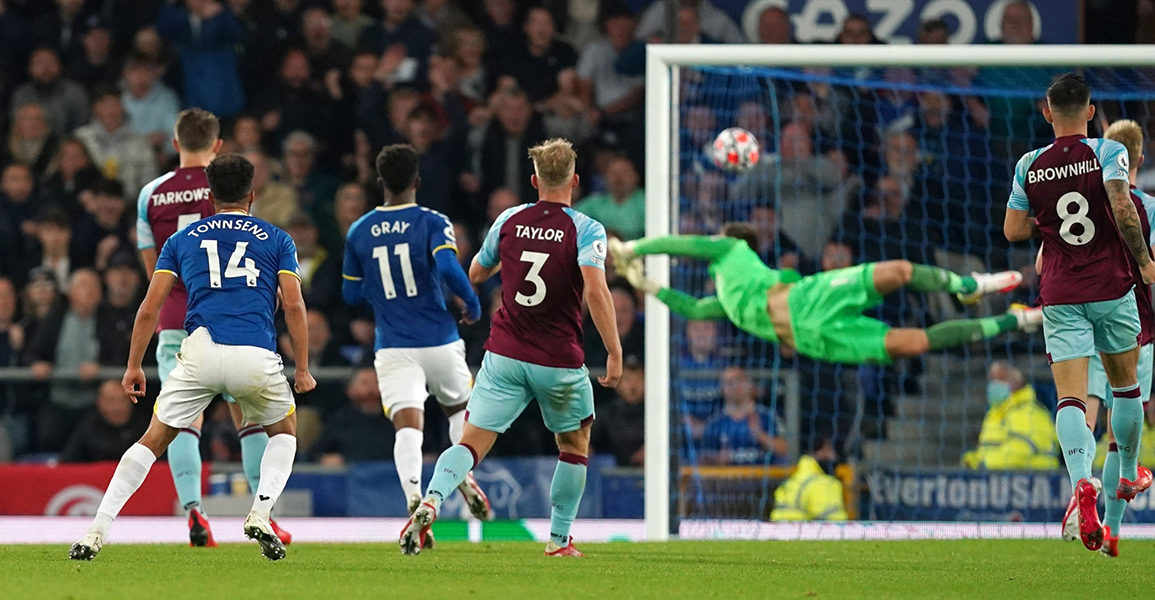 A game of two halves at the Old Lady saw Everton come from behind in swashbuckling style to sweep Burnley aside and this after looking second best for much of the first 55 minutes. A great header from Michael Keane, a worldie from Andros Townsend and a super cool slot from Demarai Gray in the space of just six minutes sent Goodison into raptures after Ben Mee had put Burnley ahead.

The first Monday Night Football slot of the new season for the Blues saw Goodison play host to East Lancashire neighbours Burnley with a chance to go top of the table if the Clarets could be consummately disposed of.

In the two weeks since the Blues travelled to Brighton and won, a number of players have been away on international duty and worryingly, club captain Seamus Coleman picked up a hamstring strain that saw him return early from the Republic of Ireland camp in order to receive treatment at Finch Farm. There were unsubstantiated rumours on social media of Lucas Digne too having picked up an injury with France but thankfully, these turned out to be trolling nonsense. Dominic Calvert-Lewin stayed home to rest his injured toe and thigh strain and when manager Rafael Benitez addressed the media on Friday, he commented on squad issues thus, starting with an update on Coleman. “It was not very bad. I think he can be available on Monday.” He continued, “The majority of the players are fine. We have two or three issues, but Yerry and Ben are training already. Fabian Delph has a problem with the shoulder. That is the longest [injury] maybe we have. Tom Davies is very close [after missing the Brighton game]. We are in a good situation at the moment.”

When asked about the status of James Rodriguez, Benitez added, “He is training with the team. We have been talking about his future and we had some clubs interested but he is still here. To get match fitness, it means he has to play games and has to play games in a row. At the moment, I think he is a little bit behind the others.”

And on DCL after his three goals in three games start while carrying the toe injury, the Spanish boss happily commented, “Dominic is doing well but he is a player that you are still expecting more from. Why? Because he wasn’t fully fit, he was making an effort to be on the pitch, he’s been training with pain.” And ahead of the game, Benitez outlined why DCL was missing from his squad to face Burnley saying, “He has broken his toe. He was training with problems and playing with pain. He had an injury the other day to his quadriceps and we have to wait two-to-three weeks, maybe more.”

Burnley under the Premier League’s longest serving manager, gravel-voiced Sean Dyche, have made a slow start to the new season having taken just one point from three games prior to arriving at Goodison. Dyche though is not a manager who panics easily and has a knack of getting the most from his players and as we saw last season, his players respond and can play a bit. Under his guidance for example, 21-year old Dwight McNeil has emerged and will play his 100th game for the Clarets earning praise from his manager, “He’s a top young player and it’s pleasing to see him amass that many games so quickly for the club”. Another Burnley player reaching a milestone was captain Ben Mee, making his 200th Premier League appearance for the Clarets.

Awaiting his Burnley debut was Ivorian international Maxwel Cornet signed from Lyon shortly before the end of the transfer window, the first foreign signing for Burnley since Steven Defour back in 2016, and midfielder Ashley Westwood thinks he could be a great addition when he said, “We’re all excited at him coming in. Hopefully he brings something we need. He scored against City (in the 2020 Champions League) – and not many of us have done that! Hopefully he can do that during the season and we’re all excited for him to be here. If he comes in and works hard he will really enjoy his football here.”

And for this television spectacular, Martin Atkinson was our duly appointed referee.

A worry for Everton in the opening 90 seconds as Richarlison went down in pain following a challenge by Brownhill and needing treatment on his right ankle before carrying on. The first opportunity fell to the visitors as McNeil crossed deep for Wood to get on the end of but, his glancing header went wide of the target. Everton responded with Demarai Gray trying his luck from fully 25 yards or more, he too putting the attempt wide of the target.

Burnley, despite their meagre return of points from their opening games were giving as good as they got through the first quarter of an hour winning a couple of early corners while Everton were getting used to playing a different formation to their opening three league games. Another Burnley attack saw them spread the ball wide left and another cross intended for Wood was claimed by Pickford. And they won their third corner just inside the 20-minute mark that caused a moment of concern as players banged into each other as the ball sailed out for a goal kick off the head of Mee.

Everton were somewhat riding their luck as another Burnley attack found Wood in the area and he laid the ball back to Brownhill who didn’t get a good connection and his shot went straight into the arms of Pickford. That spurred Everton into life and Doucoure got forward to get on the end of a ball from Townsend to fire in a shot that Pope did well to turn away. Digne joining the next Everton attack won the Blues first corner that was played short to Gray, and eventually crossed by Allan for Keane to find Mina but his header had neither power nor direction to trouble Pope.

Tempers flared momentarily following a collision between Richarlison and Mee that left the Burnley skipper needing treatment, Coleman getting in the face of Burnley players unhappy with Richarlison. Referee Atkinson sensibly let things calm down without the need for yellow cards.

A lovely move involving Coleman to Richarlison and a sweet back heel to find Seamus again and his ball to Doucoure saw the Frenchman shoot just wide but it wouldn’t have counted as the offside flag had been raised. The Blues failed to make the most of a corner moments later as Digne sent it long and Godfrey couldn’t control his header.

Into the final five minutes of a half that Everton had slowly got to the pace of and Goodison rose to applaud the photo on the big screen of two Evertonians sadly caught up in the tragic shootings in Plymouth a few weeks ago. Burnley were pressing and Everton looking to counter but, a poor cross from Digne saw the raid break down. One added minute was signalled, nothing ensured and the teams went to the interval locked at nil-nil and time for manager Benitez to maybe address the formation?

No changes by either manager for the second half was something of a surprise from the point of view of Blues fans thinking the addition of Salomon Rondon might have helped fill the gap of DCL not being there. Brownhill was the games first booking as he brought down Townsend, the free kick from Digne disappointingly cannoning out for a throw-in off the Burnley wall. A ball down the left from Allan saw Richarlison clattered by Tarkowski, referee Atkinson seeing nothing wrong with the challenge. The opening minutes of the half seeing a few strong tackles going in as Taylor brought down Townsend with no free kick awarded. And when Townsend impeded Taylor, he became the second player to see yellow.

And it got worse for the Blues on 53 minutes as from the free kick, the ball came out for Gudmundsson to cross and pick out Mee to put the visitors in front with a point-blank header inside the six yard area.

Everton needed to find something to really get them going and Doucoure to Digne saw another corner won as the cross was deflected behind off Mee, the corner again played short and not producing. But the Blues kept the pressure on and when the ball came out wide right to Townsend on the hour mark, his perfect cross was met by former Burnley defender Michael Keane and he gave Pope no chance with a terrific equalising header.

And the game changed just four minutes later as Doucoure found Andros Townsend and he took it on a few paces before bending a fabulous shot into the top corner from fully 25 yards, a stunning way to take the lead.

And barely had the cheers subsided than Goodison erupted again as Demarai Gray was found on oceans of space by a great ball again from Doucoure and the new boy finished in style, beating Pope low to the keepers left hand side for 3-1 Blues.

A fourth goal in ten minutes was denied as an offside flag robbed Abdoulaye Doucoure of a goal his second half performance alone had justified. The action was now relentless as Pope with a terrific save denied Townsend and then Doucoure found Gomes and he saw his shot go narrowly wide of the far post as Everton looked to increase their advantage. Burnley won a corner as a looping ball was deflected behind and the second effort from the set piece saw Wood head home to be denied by an offside flag.

Former Blue Aaron Lennon came on for Barnes in 76 minutes with Vydra also coming on to replace Gudmundsson. With ten minutes to play, Everton made their second change, Salomon Rondon making his debut replacing Richarlison who, as per usual, didn’t look happy at being withdrawn.

The fire had gone out of the game now, Burnley not giving up but, not able to recover from the Everton salvo that had rocked them back on their heels.

Alex Iwobi came on for a three minutes plus added-on time cameo, allowing Demarai Gray to get a deserved standing ovation for his showing in an important turnaround for the Blues.

Burnley through Taylor won a corner as four added minutes were signalled, Pickford punching the ball to safety where Gomes launched another Everton attack before the pace was taken out to eat some time off the clock and then increased again to stretch the Burnley defence with a cross from the right through the visitors penalty area. A late surge forward by McNeil saw him shoot from distance, Pickford with an easy save.

Burnley will wonder how they got caught out by the Blues second half blitz, while Everton will want to win games a little easier than the way this one played out but, there;s no denying that under Rafael Benitezm Everton have found a spirit and resolve that’s been lacking in recent seasons.

Are Newcastle a bigger club than us now?