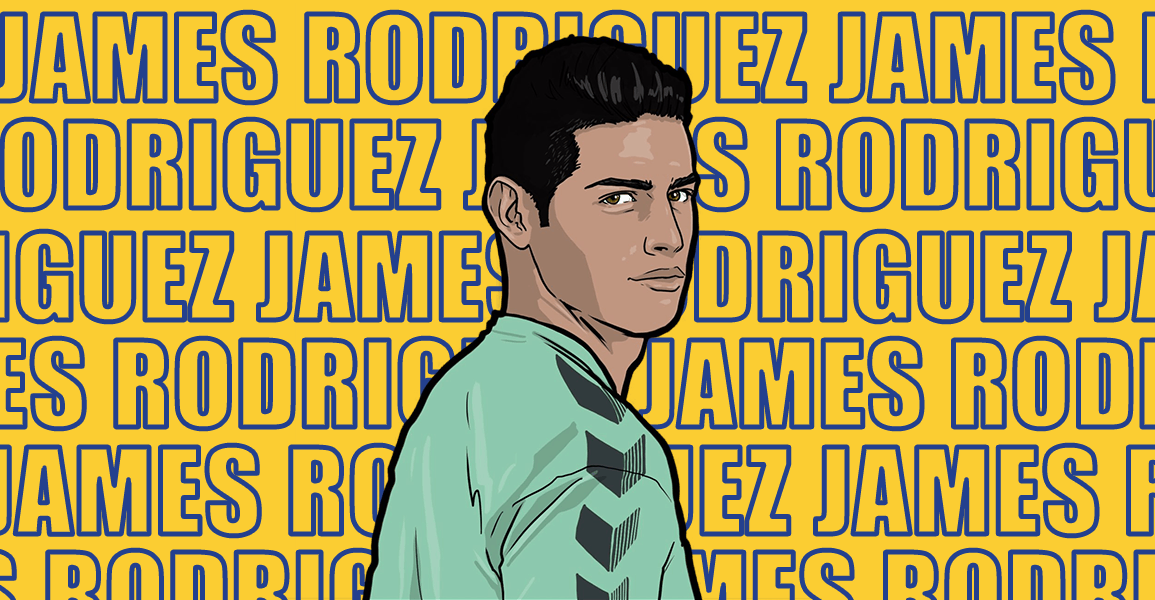 With the Summer Transfer Window now slammed shut, James Rodriguez will officially be staying at Everton for a second season, or at least until January, despite the fact he looked extremely likely to leave as soon as Carlo Ancelotti walked out the door. James was “isolating” during Everton’s first three games of the Premier League season, but now, after returning to training last week, the Colombian superstar has yet again been omitted from his country’s squad during the International Break, meaning he should have time to get fit and find a way to squeeze himself into Rafa Benitez’s plans for the season.

In this article, I’ll be taking a look at what James Rodriguez can contribute to Everton’s season and how Rafa may choose to utilize him. It’s no secret that Benitez has drastically changed the system since Ancelotti’s departure, and so it’s extremely unclear how and where Benitez will employ the playmaker. Before we get into my personal prediction, let’s talk about why fitting James in is something that needs to be considered in the first place.

It’s no mystery that James has struggled to maintain his fitness, as the 30-year-old has not played over 25 league games since the 2015/16 campaign while a 24-year-old at Real Madrid.  He has only ever played more than 30 league games in a season once in his career; his lone year at Monaco in 2013/14 when he was 22. Last season he played in 23 Premier League games, starting 21 of them, which was the most league starts he had made since 2014/15. With all that being said, there is absolutely no doubt that when he does play, the Colombian maestro makes a considerable impact.

Last season in the Premier League, James Rodriguez was (among players who played more than 50 league minutes) Everton’s team leader in Goals + Assists per 90 (.51), Expected Assists per 90 (.28), Goal-Creating Actions (13), Goal-Creation Actions per 90 (.66), and Shot-Creating Actions per 90 (3.67). He was also second in the team for Assists per 90 (.20) only behind Digne, second for Goals per 90 (.31) only behind Calvert-Lewin, and second for total Shot-Creating Actions (72) only behind Richarlison. He also tied for 3rd with Gylfi Sigurdsson for league goals, both having scored six, but the Icelander did so from an xG of 6.8, while the Colombian scored his 6 from an xG of 3.4, which makes him statistically the best finisher on the team. Since xG only became a recorded stat across all major leagues in 2017/18, James has scored 21 goals from an xG of just 13.6, proving just how deadly he is when given the opportunity to shoot. He only registered 4 assists last season, leaving him 3rd in the squad behind Digne (7) and Sigurdsson (5), but did so from an xA of 5.4, which was level with the Frenchman and ahead of Sigurdsson’s 5.0. When compared to other attacking mids & wingers over the last year, James ranks in the 98th percentile for progressive passes per 90, meaning the final ball isn’t his only contribution, but that he is also instrumental to how Everton progress the ball to the final third in the first place. James is a player of unbelievable ability and is one of the most talented players the club has ever seen. It’s not hard to figure out what the benefits of playing him are.

Why Wasn’t James in Rafa’s Plans?

Although his stats going forward are very impressive, it’s no secret that James’ defensive output is suboptimal. He famously played a few games last season in which he completed 0 sprints, which shows what kind of player he is. He’s not a workhorse who puts in the hard yards and earns his place on the pitch solely through effort. He’s an artist who makes things happen with his magic left foot. With that being said, so far under Rafa Benitez, Everton have been playing a much more grafting style of football than they did under Carlo Ancelotti, which doesn’t suit James’ laissez-faire approach to defending. Quite simply, James has not exhibited the qualities that Benitez needs in order to execute this new style of football. He also doesn’t play a position that Benitez’s system relies upon, and he is not physically gifted enough to make a seamless transition into a role that better suits the team.

How Will Rafa Use James?

In my opinion, Everton’s win over Brighton at The Amex last weekend is the best case study for how Rafa will likely set up the squad for the rest of the season given how ruthlessly they executed the Spaniard’s game plan, as so I will be mainly basing my analysis upon that. Although Rafa may adjust and this may become outdated, I loved that performance, so long may it continue. Everton seemed to line up in a 4-4-1-1, with Richarlison playing as a second striker/center forward, as shown here:

However, the average position graph below shows that Richarlison actually took up a position next to Calvert-Lewin as a left-striker, with Demarai Gray pushing up high on the left wing and Andros Townsend dropping slightly deeper on the right side to support Seamus Coleman.

This resembles a 4-4-2 with attacking fullbacks, which doesn’t leave much room for a luxury attacking midfielder such as Rodriguez unless he were to be deployed as the right-mid in replace of Townsend. That brings up quite a few problems.

Across the three league games thus far, Everton have averaged just 37.33% possession, displaying how content they are to let their opposition keep the ball in harmless areas of the pitch, and then press them to win the ball back and counter once they advance into Everton’s half. Andros Townsend was crucial to the success of this tactic against Brighton, as he made 4 tackles and won back possession 8 times. Across his three Premier League appearances for the club thus far, Townsend has averaged 24.7 pressures per 90, while James only averaged just over half that last season.

These two graphs show the amount of certain defensive actions performed per 90, and the subsequent percentile that the stat falls into among attacking midfielders and wingers in Europe’s Top 5 Leagues over the past calendar year. I’m sure you can guess which belongs to Townsend and which belongs to Rodriguez.

Almost half of James’ 26 appearances in all competitions last season came on the right wing, but when you compare his defensive contributions to those of Townsend, it’s pretty clear that he will struggle to play on the right side in Benitez’s system should it continue relying on the right midfielder’s defensive involvement for tactical success. It could, however, make sense to play James there should Rafa choose to slightly change the system and choose not to prioritize defending on that side of the pitch. More on that later.

The other option, of course, is for James to play in his preferred position as a central attacking midfielder. Against Southampton, Everton did line up in a 4-2-3-1 with Demarai Gray playing in that very position, but throughout the game, Gray and Richarlison constantly rotated between the left-hand side and the center, while Townsend stayed on the right and supported Coleman defensively (more evidence that James won’t play there). The fluidity of the attack proved to cause a lot of problems for the Saints, as Richarlison ghosted in unmarked to score the Toffees equalizer, and then combined with Iwobi once Townsend had been substituted to whip in a perfect cross for Calvert-Lewin to equalize. Should Benitez revert to that 4-2-3-1, it’s possible James could take up the position that Gray started in, but the lack of fluidity there could be a detractor considering James doesn’t have the ability to bomb up the wing on a moments notice as both Richarlison and Gray can.

Should Benitez continue with the 4-4-1-1, it would necessitate that the formation stays that way throughout the match, rather than morph into a 4-4-2, in order to accommodate James playing as a playmaker behind Calvert-Lewin. In that situation, Richarlison would likely play out on the left, leaving a selection headache in the form of Demarai Gray, a natural left winger, who is seemingly undroppable at the moment with the form he is in. Should he be moved to the right wing, Townsend and his defensive contributions would then have to make way, undermining some of the most fundamental values of what Benitez is trying to accomplish with this Everton side.

Although we were all very confused at first, it now makes sense that Benitez told James Rodriguez that he was not necessarily in his plans, quite simply because he doesn’t fit into the team without causing problems elsewhere. With that being said, I’m sure that Rafa understands just how much of a talent the Colombian is and that there are certain situations in which he could be invaluable to the team. I think that James will only be used as an impact substitution when Everton face higher quality or more expansive teams, and instead will receive most of his starts against stubborn low-block teams such as Burnley and Newcastle whom Everton may struggle to break down. His ability to unlock defenses could be crucial in those types of matchups, especially when you look back at how last year’s Everton team utterly failed to do so, especially at home. Games like those don’t necessitate Andros Townsend’s defensive doggedness on the right-hand side, in my opinion, but rather James’ skill and incision, and so that is where I predict we will see him at his most effective under Rafa Benitez; on the right against stubborn opposition, serving in balls to Calvert-Lewin and Richarlison, and subsequently changing the game with a wave of the wand that is his left foot.

What are your thoughts on the impact that James Rodriguez will make this season? Do you agree with my prediction? Let me know on Twitter, @ParrettGost! I’d love to continue the conversation. Thank you all for reading, and as always, Up the Toffees!