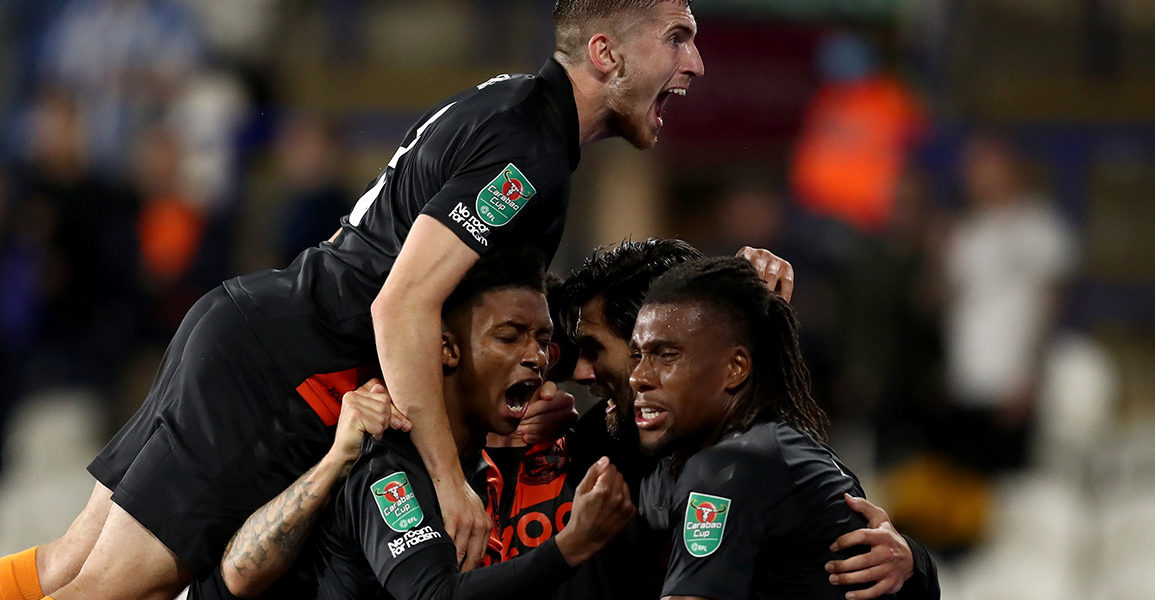 Everton progressed to the next round of the Carabao Cup on goals from Alex Iwobi and Andros Townsend but, the hard-win victory over a battling Huddersfield was tainted by a straight red for the petulant Moise Kean whose actions will hardly endear him to mnager Rafael Benitez.

Everton began their Carabao Cup campaign with a trip back to West Yorkshire and a visit to the John Smith’s Stadium, home of the Terriers – Huddersfield Town.

The Terriers have rebounded nicely from a 5-1 thumping at home by Fulham to take a point off Wayne Rooney’s Derby, squeeze past Sheffield Wednesday on penalties in the EFL Cup and last Saturday they won impressively at Bramhall Lane to make it a double over Steel City opposition.

Huddersfield, like Everton, are under Spanish management this season with Carlos Corberan a former first team coach and U23s boss at neighbours Leeds having taken the hot seat at the John Smith’s Stadium in July last year. And given the chance to pit his side against Premier League opposition, the 38-year old remarked, “To have the opportunity to play against Everton is fantastic for us. To be able to continue our Cup run is exactly what we wanted. That’s why we played the first game against Sheffield Wednesday before the League started, so that we could give it our full attention. I need to analyse my full squad and see which players need minutes. We expect a lot of competition, they’ll be a high challenge and a tough opponent.”

Corberan had injury concerns against of facing the Blues and confirmed that neither defender Pipa nor striker Jordan Rhodes were even close to being ready for selection – Pipa needing surgery on a hip injury while Rhodes has a back problem.

But boosted by those recent results over both Sheffield clubs, he made six changes in selecting his side to face Everton namely: Nicholls, Lees, Pearson, Sarr, Thomas, Holmes, Vallejo, High, Toffolo (c), Campbell and Sinani.

Speaking on Monday, Blues boss Rafael Benitez gave credit to his players for their hunger and desire in the opening two Premier League games when he commented, “You always you want to improve and do things a little bit better and it is too early [to see training ground work fully reflected on the pitch] but, I like the team spirit and mentality of the players, their desire and unity. You can feel the fans appreciate that.”

The Spaniard expressed his pleasure at the performance of summer signing Demarai Gray at Elland Road adding, “It [Gray’s goal and performance] is an indication we have a player trying to do his best. At the same time, he is pushing the players around him, because the competition is good in each position. He has to improve, he knows he has to improve. “But he can give us something different, like [Andros] Townsend gives us something different. And [Alex] Iwobi is working very hard for the team and being a threat. Gray and Townsend are giving us competition in the wide areas and that will only be positive for the team and the strikers.”

With a possibility of giving more players a chance to make an early season impression, Benitez resisted the temptation to stay with his first choice eleven preferring to give squad players the opportunity to impress in selecting: Begovic, Kenny, Holgate (c), Keane, Branthwaite, Nkounkou, Davies, Gbamin, Iwobi, Townsend and Kean.

On a pleasant and warm late August evening in West Yorkshire, our referee was Matt Donohue.

Town with most of the early possession before an errant pass was picked off by Moise Kean who got forward quickly only to pull his shot wide of the post with troubling the home goalie. Everton with a decent raid saw Iwobi carry the ball before finding Nkounkou on the overlap to cross low for Kean who saw his close range effort pushed around the post for a corner that came to nothing.

The Blues after those two chances were pinned back in their own half, trying the play the ball out from the back but, being pressured by the home side and leading to several back passes and misplaced forward passes. Kean again latched onto a loose ball to feed Townsend who rushed his shot from 25 yards pulling it well wide of the target. Gbamin with a nice through ball to Kean who played a one-two with Davies but couldn’t get a shot away as the home defence closed around him.

A quarter of an hour on the clock had allowed both teams to take a look at each other, and a long ball from Keane intended for Townsend saw Nicholls race beyond his penalty areas to chest the ball down and clear. Everton hadn’t yet found a way to dominate and control the midfield, and when Davies got forward down the right to get on the end of a ball from Kenny, his cross was too strong for Kean and found Nkounkou who hit a rising shot way over the bar.

Iwobi breaking forward fed Townsend on the right flank only for him to loft a rather aimless cross straight into the waiting arms of Nicholls, Town countered with a ball through the middle that saw Begovic smartly off his line to smother.

Everton produced the best move on the game so far on 25 minutes and it paid dividends, Gbamin with a nice ball to Davies getting forward and he threaded a good pass through the home defence for Alex Iwobi to calmly slot the opening goal

And a minute later Moise Kean – fed by Nkounkou – gained the Huddersfield area and blasted home high pas the goalie only for the offside flag to deny him a smashing finish and see him stare daggers at the linesperson.

Huddersfield spurned a great chance to tie the game up on 33 minutes as a right wing break led to the ball falling at the feet of debutante Sinani, Begovic pushed out the first effort with the second effort lifted well over the bar. Nkounkou seemed capable of using his pace to beat his opposite number almost at will and did so to get on the end of a cross from Kenny only for his shot to spoon up and over the bar. Begovic saved comfortably from another shot by Sinani as we entered the final five minutes of the half that hadn’t really sprung into life despite the Blues having the better chances.

A late effort from Campbell shaved the outside of the Everton goal frame after he’d hurried Holgate off the ball and as the half time whistle was poised in the refs mouth, Sinani tried another shot that was deflected wide for a corner. And the set piece was executed perfectly, Thomas with the inswinging corner and Lees finding space right on the six yard line to climb highest and plant a firm header into the Everton net right on 45 minutes.

A disappointing end to the half from the Blues perspective but, credit the Terriers for coming back strongly in the closing stages to draw level at the break.

No changes by either manager for the second half and another positive surge forward by Sinani saw his shrug off Holgate before firing wide of the target as he gained the edge of the Everton penalty area. Huddersfield were clearly encouraged by the late first half equaliser and it took a hurried clearance to present Everton with a corner that Andros Townsend made a complete town halls of. Town back on the front foot forced Everton into some defensive work and led to a decent shot from Campbell being tipped over the bar by Begovic for a corner… and once again, the Blues zonal marking was found wanting as the corner was met by the head of Pearson to bulge the net, the Blues blushes saved by an offside flag against Sarr.

Everton brought Andre Gomes on for Jarrad Branthwaite on 57 minutes, hoping his introduction would strengthen and bring some degree of control to the midfield only for tempers to flare two minutes later as Moise Kean was shown a straight red card for a completely stupid and frankly pathetic off the ball reaction to a challenge from Thomas and the Blues were down to ten men for the last half hour.

Manager Benitez reacted to the sending off with his second change of the game four minutes later, Lucas Digne replacing Tom Davies and adjusting the formation to 4-4-1 with Alex Iwobi in effect the lone striker.

Huddersfield replaced Sinani and Lees with O’Brien and Turton respectively on 69 minutes as they looked to add fresh legs for a late challenge to find a winning goal.

A Blues free kick brought nothing and led to a break by Town, JonJoe Kenny racing back to get a strong clearance in ahead of the Blues third change, Demarai Gray replacing Niel Nkounkou on 74 minutes.

Into the final quarter hour and the outcome was till on a knife-edge, Everton winning another corner that Townsend again failed to find a teammates head with and Town cleared. Everton steadily built and attack with passing and patience and it worked perfectly as Iwobi took a ball from Gomes to feed Gray whose low cross was met by Andros Townsend to beat Nicholls at his near post to put the Blues back in front with just over ten minutes remaining.

From the restart Townsend was then clattered by Sarr who was fortunate only to see a yellow card for an agricultural challenge. It was now huff ‘n puff football from Huddersfield with Everton using their greater experience to hold them at bay and looking to counter to keep the home side occupied in midfield and at the back. Four added-on minutes were signalled and the home side strained forward to win another corner off the head of Holgate. Thomas again was the man to swing it in but seeing his cross sail through the six yard area and out for a goal kick. Demarai Gray drew a late save from the legs of Nicholls and that was that, the Blues progress, but the days of Moise Kean as an Everton player are surely numbered.

Not the most polished performance from this initially second string Everton side but, progression was the name of the game and on that score manager Benitez will be quietly pleased.