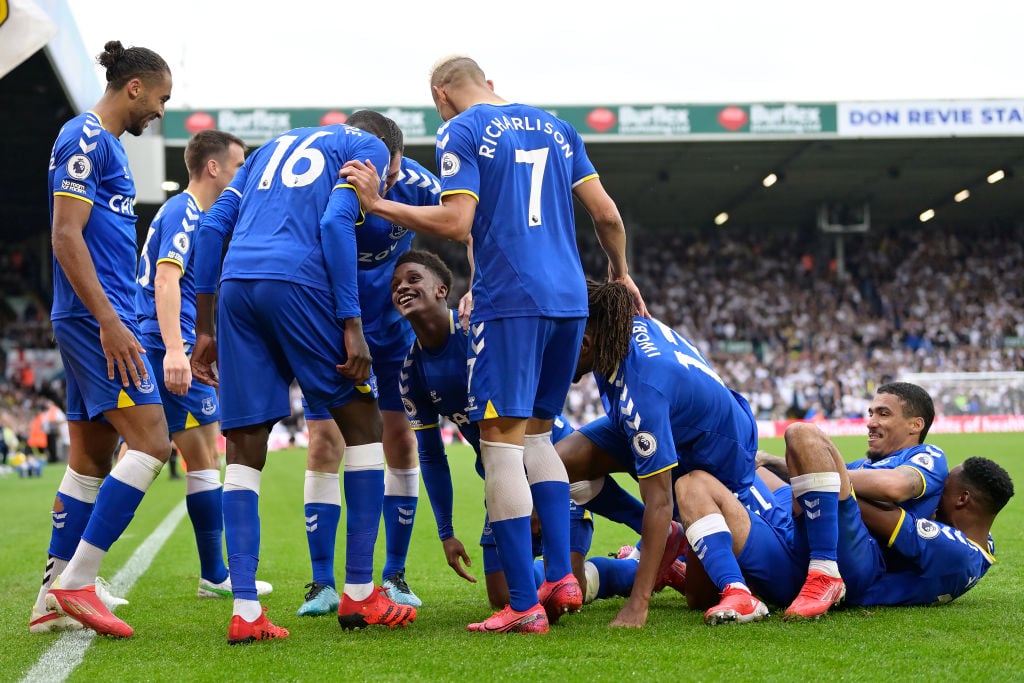 Despite a boisterous crowd at Elland Road, which hosted its first Premier League match with fans for over 17 years, Rafa Benitez’s Everton were unlucky not to leave Yorkshire with all three points. Although nearly every Evertonian would have settled for a point had you offered it to them before the match, you can’t help but feel a little disappointed with just one after the way the Toffees performed and the chances they created. Dominic Calvert-Lewin opened the scoring in the 30th minute by smashing home the penalty kick that he won, but Mateus Klich equalized just over 10 minutes later, leaving the score level at halftime. Demarai Gray opened his account for Everton with an accomplished left-footed finish early in the second half, but Raphinha came back to haunt the Toffees yet again, which I’ll discuss more later on.

Here are Three Things We Learned from Leeds 2-2 Everton.

1. Demarai Gray Was a Bargain

At just £1.7 million, the signing of 25-year-old Demarai Gray from Bayer Leverkusen looks more and more like a Marcel Brands masterstroke with every passing week. The winger impressed during pre-season, and now has started life back in the Premier League with real promise, putting in a very solid performance in the opener against Southampton on his debut and then netting his first goal for the Toffees with a precise weak-footed strike at Elland Road. With Everton tiptoeing the lines drawn out by Financial Fair Play, finding the quality winger that the squad desperately lacked last season on a budget was always going to be a very difficult yet important task, but thus far it seems that Everton’s recruitment team rose to that challenge by picking up Gray for what is effectively pocket change for an established Premier League club such as Everton. The move also allows for more potential incomings, as at the time of writing Everton are in negotiations for Argentine playmaker Joaquin Correa from Lazio and have been known to be very interested in Burnley starlet Dwight McNeil. Checking “starting quality winger” off of the wishlist by spending just £1.7 million is a big success for Everton.

With his equalizer in the 72nd minute, Leeds’ #10 Raphinha became the first player to score in three consecutive appearances against Everton since Pete Lorimer in 1978. This also meant that he has scored in all three games that he has played against the Toffees. The Brazilian found space in dangerous areas all game long but had not forced a save of any real difficulty out of Jordan Pickford until his powerful bending strike leveled proceedings 18 minutes from time. It was almost written in the stars that Raphinha would yet again net against the Blues, and he again proved how difficult he is to deal with, especially against Everton.

Firstly, I’m not just saying this because Dom happens to be in my FPL squad. Calvert-Lewin is now 4 for 4 on spot-kicks in his career, or 5 for 5 when you include the penalty he dispatched into the bottom-left corner against Leicester in Everton’s shootout defeat to the Foxes in the 2019/20 EFL Cup Quarterfinal. Everton’s previous taker, Gylfi Sigurdsson, is 32/41 in his career (a 78% conversion rate) which is only marginally above average (75%). On top of that, DCL is a young striker who thrives off of runs of good form and confidence boosts, and so it should’ve always been him taking penalties not only because he buries them, but also because taking and scoring them likely improves his overall performance, which is even more important now that Rafa Benitez has decided to build his squad and system around the Sheffield-born striker.

What other main takeaways from the match did I miss? Let me know on Twitter, where you can find me @ParrettGost. I’ll see you all for another episode after Everton’s cup tie with Huddersfield Town on Tuesday. Thanks for reading, and as always, Up The Toffees!