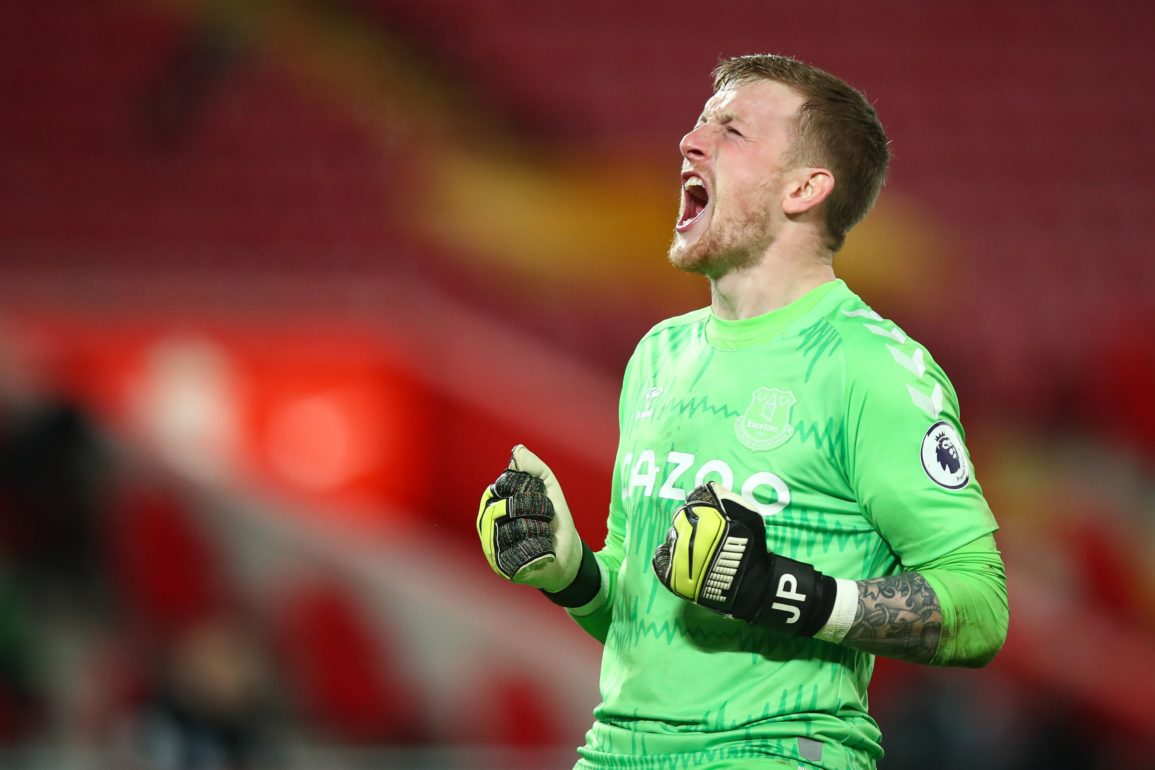 How are these three superheroes linked? Well Pickford according to Jamie Carragher and Gary Neville, just like Bruce and Clark, has an alter ego and changes his ability depending on what colour shirt he’s wearing.

When writing in his column for the Telegraph during the European Championships Carragher claimed Pickford is a different player when playing for England than Everton. The claim is not only bizarre but to any right minded Evertonian complete fabrication, as usual, the so-called pundits showing a lack of knowledge when it comes to Pickford’s recent displays in an Everton shirt.

Carragher isn’t alone in his bizarre theory as his Sky Sports’ teammate Neville proved, again during the Euros, when he tweeted that Pickford had been his man of the match against Germany yet ended his tweet by saying ‘I’ve been critical of him with Everton but with England he’s a different player’ – No Gary, he really isn’t.
At the time of Carragher’s column Pickford had already racked up four clean sheets and helped England into a quarter final against Ukraine – justifying the England praise from the punditry duo – yet during 2021 Pickford was outstanding in an Everton shirt, no longer showing the traits that left fans questioning his suitability to keep the number one jersey.

It was a remarkable turn in form for the Blues’ custodian, given that only a few months earlier Pickford had been vilified through the press and social media following the Merseyside derby draw at Goodison. We all know the incident in question, a challenge on Virgil van Dijk which left the Dutchman’s season over but the reaction that followed became absurd, it had escalated from a tackle during a football match – which remarkably do happen – to some sort of assault which required a ban as long as van Dijk was out to jail time (probably).

The media also leapt on the anti-Pickford bandwagon; the hypocrisy of the journalists knew no bounds, take Daily Mirror reporter Darren Lewis as an example, during the aftermath, he tweeted that VAR had not exercised their duty of care for van Dijk when Pickford endangered his safety yet when Son broke Andre Gomes’ ankle Lewis was very defensive of the Tottenham forward claiming ‘Horrific [for] Gomes and Everton but Son clearly not at fault’ – it isn’t any wonder when supporters of clubs outside the media’s mythical big six think there is a bias.

In a world where mental health awareness – especially within sport – is becoming commonplace and top stars are opening up about their struggles in the spotlight with many media outlets behind campaigns for players and people to be more open about mental health yet the impact of slurs like that from Lewis, a man who campaigns so forthrightly for equality within the sporting world and beyond for people of colour, can be extremely damaging.

Pickford bounced back and arguably showed some of his best form in an Everton shirt he was composed, assured, concentrated and cut the figure of a competent and confident goalkeeper finishing the season with ten clean sheets and conceding 39 goals, before deservedly taking his place as number one for England’s Euro 2020 campaign.

On a personal level it was a vastly successful summer for Pickford and when he made a huge save to keep Jorginho’s penalty at bay England was dreaming – it almost came home. The final loss aside Pickford repaid Southgate’s faith in his ability, plenty of the media had decided that the England manager should look elsewhere and even Jose Mourinho popped up on Talksport to claim that Dean Henderson should be England’s number one yet for arguably Manchester United’s biggest game of the season, a Europa League final with Villarreal, Solskjaer benched Henderson in favour of David de Gea – a decision which spoke volumes.

It seems unfathomable even now that as soon as the final whistle blew at Wembley Italy’s Donnarumma was instantly awarded player of the tournament but a quick look at the stats will tell you that Pickford had more clean sheets – had there been a golden glove at the tournament Pickford would have won comfortably – he also conceded less goals and made more saves which led to a better save percentage, in fact, the only stat in which Donnarumma comes out on top was minutes played due to Italy’s extra time commitments; this begs the obvious question if you aren’t the best player in your position then how can you be the player of the tournament?

It wasn’t only a remarkable turn around in form and a showing of huge mental fortitude after the media barrage but a massive swing of backing from Evertonians also followed, Pickford has been much maligned around Goodison Park for his errors and lack of concentration during games, but fans rallied after the van Dijk incident and when performances improved so did the backing. It wasn’t long ago that Evertonians would have agreed with Carragher and Neville’s stance, but things changed, as they often do in football, no longer is there a clamour for a new goalkeeper to take Pickford’s place (a huge compliment to his current form) in fact he has now cemented himself as Everton and England’s number one and at just 27 years age there are many more years ahead between the posts for Jordan Pickford.

In summary it turns out Carragher and Neville are both talking shite!

UP THE FUCKIN’ TOFFEES!